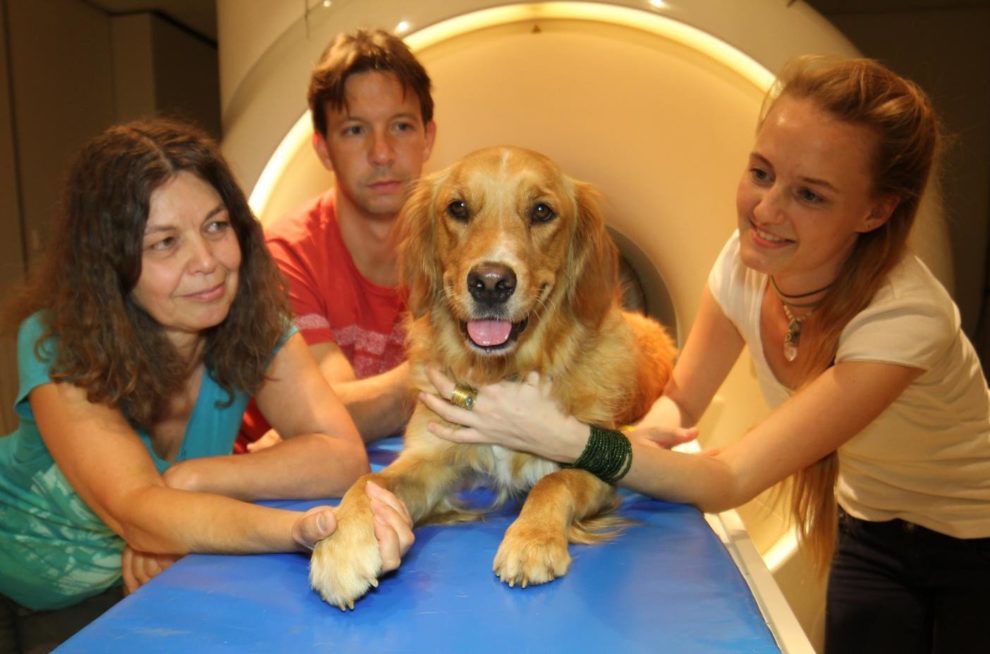 “Seat! You did that well! ”How do dogs understand what and how we tell them something? A study now shows that the four-legged brains proceed hierarchically when it comes to language processing – just like ours: the tone that conveys emotions is captured by more fundamental brain levels, while the meaning of the word is in the more highly developed regions of the cortex. This is an interesting parallel between the way the human brain works and that of a species without a spoken language, say the researchers.

They can understand hundreds of different words and also respond to the emotional messages in the intonation of our language. This ability of dogs plays an important role in the intimate relationship between humans and their “best friend”. For example, when we say “sit!” Dogs can assign this to the desired behavior. Dogs also understand praise like “You did that well!” As a positive emotional message based on the characteristic tone with which they speak to people. Both aspects of language also play an important role in interpersonal communication and some processes are already known that take place in the brain.

Insights into the dog’s brain

But does something similar happen in the brain of dogs? Hungarian researchers have been dealing with this question for some time. “Exploring the similarities and differences in language processing between canine and human brains can go a long way towards understanding the steps that led to the creation of language during evolution,” says co-author Anna Gábor of Eötvös Loránd University in Budapest. Through studies using functional magnetic resonance imaging (fMRI), she and her colleagues have already been able to show that dogs understand both aspects of language separately: Different areas of the brain seem to be involved in the processing of word meanings and the emotional tone of voice.

So far, however, the question has remained open whether the dog’s brain also shares another characteristic function with its human counterpart: We process the two components of language hierarchically. This means that evolutionarily older brain areas of the auditory system capture the emotional information of intonation, while the word meaning is processed at a higher level of the cerebral hierarchy.

In order to investigate whether the dog’s brain works in a similarly hierarchical manner, the scientists again carried out experiments with their dogs, which are used to lying quietly in a magnetic resonance tomograph. During the fMRI recordings of their brain activity, the test animals heard expressions of praise such as “Well done!” From their trainers as well as unknown, neutral words with both praising and neutral intonation.

In order to gain more detailed insights into brain function than before, the scientists used a special technique in the new tests: They used the effect of habituation – the reduction in the response to a repeated stimulus caused by habituation that remains without consequence. In brain research, the effect has proven to be a way of investigating whether individuals are able to differentiate between certain stimuli and also where the corresponding processing takes place.

“During the brain scan, we sometimes repeated words, sometimes intonations,” says Gábor. The decline in activity in certain brain areas reflects their involvement in stimulus processing, the scientists explain. This also enables the area to be precisely located. In this way, they were able to confirm that the dog’s brain also reacts hierarchically when processing language: Intonation activates lower levels (subcortical), while known words are processed at higher levels of the brain (in cortical regions), emerged from the brain scans.

“Although speech processing in humans is unique in many respects, this study shows interesting similarities between us and dogs,” sums up co-author Attila Andics. However, that did not necessarily mean that this hierarchical processing method was specially developed for dealing with language, ”the scientist points out. “Instead, the system could reflect a more general, non-language-specific processing principle: more fundamental, emotionally charged cues – such as intonation – are typically analyzed at lower levels, while more complex, learned information – such as word meaning – for multiple species is analyzed at higher levels “Says Andics.

BMW M2 CS excels in one test, fails in another

There seems to be a dispute about whether the BMW M2 CS is the most brilliant or most disappointing driver's car of the year....
Read more

This video of bravery with a burnout reminds me of the song 'Karma Police' by Radiohead. It was present! Also interesting! Video - revealing gender...
Read more

We are looking for a relaxed, separate cruise mobile for 10,000 euros. With many requests we see certain wishes coming back. The wishes are...
Read more

Broken heart syndrome is also the medical name. (Image: frender / iStock) It is said that grief can break people's hearts. This is...
Read more

VinFast is back and finally got it

Starting up a new brand and then serving lukewarm BMWs with thick petrol engines seemed to be unsuccessful. VinFast understands it better this...
Read more

How our brain processes writing

How did our brain learn to read? (Image: Talaj / iStock) The challenge of reading writing is evolutionary too young for specific brain areas...
Read more
Psychology & Sociology

Is agile coaching replacing management consulting? A look at research

At first glance, nobody can tell whether this is the protagonist of a management consultancy or of agile coaching (Image: pixabay.com, geralt) There are...
Read more
Psychology & Sociology

Why are aha moments so beautiful?

What happens when there is a flash of inspiration in our brain? (Graphic: Thomas Vogel / iStock) When we suddenly find the solution to...
Read more
Psychology & Sociology

Exotic imports over 3000 years ago

A market in the city of Megiddo in the second millennium BC Chr .: Grocers offer not only local products but also exotic...
Read more
Psychology & Sociology

How loneliness is reflected in the brain

Loneliness is a social problem that has become even more important in the wake of the Corona crisis. (Image: Marina113 / iStock) Depressing loneliness...
Read more