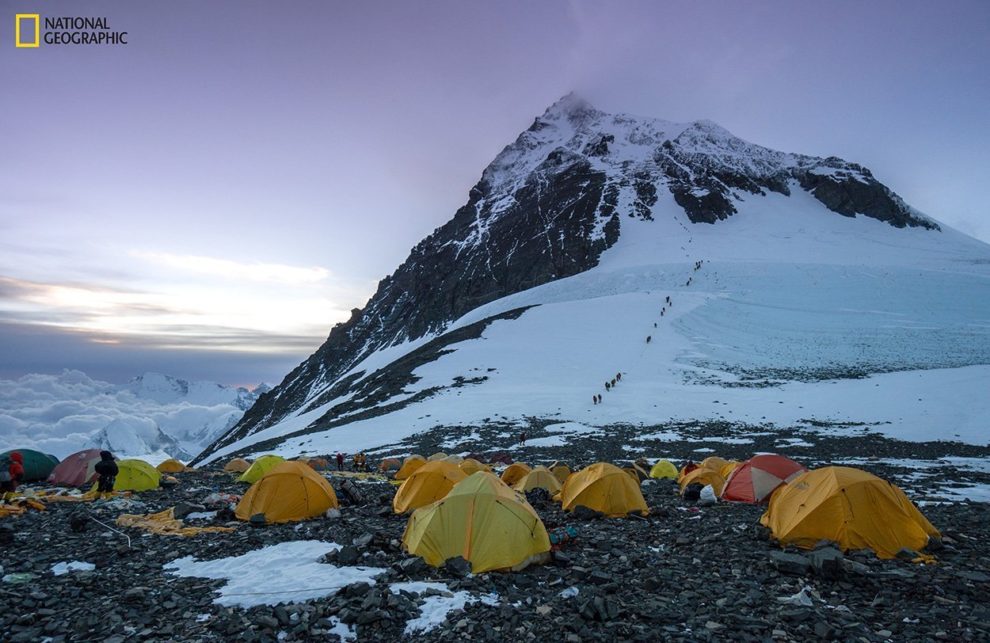 Human plastic waste can now be found even in the most remote regions of our planet – from deep-sea trenches to high mountains. The analyzes of a Himalayan expedition now show that even the snow near the summit of Mount Everest is contaminated with microplastics. The scientists found fibers made of polyester, acrylic, nylon and polypropylene at an altitude of 8,440 meters. The microplastics likely come from climbers’ clothing and equipment. According to the researchers, this underscores the great responsibility that visitors to such places have to preserve the unspoiled nature.

For a long time the peaks of the Himalayas were almost inaccessible to humans – one of the reasons why the inhabitants of the region equated them with gods. But with the beginning of modern mountaineering and later mountain tourism, the high mountains have become popular destinations for people from all over the world. Even the highest mountain in the world, Mount Everest, 8848 meters high, is now climbed by hundreds of mountaineers every year. But with the visitors, the rubbish came up on the mountain: “50 years ago the camp at South Col at 8,000 meters above sea level was described as the highest garbage dump in the world and the entire mountain as the highest garbage dump,” explains Imogen Napper from the University of Plymouth and their colleagues. Plastic bottles, food packaging, cigarette butts and even empty oxygen bottles now litter the steep slopes of the mountain. In 2019, the Nepalese army collected more than 10,000 kilograms of waste from Mount Everest and the surrounding region.

Despite this well-known waste problem, it was previously unknown whether and with how much microplastic the once untouched snow world on Mount Everest was contaminated. To find out, Napper and her colleagues took eleven snow samples from more than 8,000 meters above sea level and eight water samples from high mountain streams as part of the National Geographic and Rolex Perpetual Planet Everest Expedition in summer 2019. The samples came from the base camp, where mountaineers stay for up to 40 days, and from several stations a few meters from the route to the summit. The researchers took the highest snow sample on the so-called “balcony”, an 8,440 meter high ledge directly below the summit. They then analyzed all samples in the laboratory for their microplastic content.

Fibers of clothing and equipment of climbers

To find out where the microplastic on Mount Everest comes from, the scientists examined the shape and chemical composition of the plastic particles. It was found that most of the microplastic consisted of tiny fibers between 36 and 3800 micrometers long. However, their composition varied: “The samples showed significant amounts of polyester, acrylic, nylon and also polypropylene fibers,” reports Napper. Polyester had the largest share at 56 percent. “These materials are increasingly being used to manufacture highly functional outdoor clothing for climbers, but also for tents and ropes,” explains the researcher. She and her colleagues therefore assume that the microplastic was not so much the result of the disintegration of larger plastic waste in the snow than it was released directly from the climbers’ equipment and clothing. Previous studies have shown that a polyester jacket weighing around one kilogram can release around one billion microplastic particles over the course of a year, the researchers say. This corresponds to around 2.8 million particles in one day.

According to the scientists, the evidence of microplastics even on the highest mountain in the world underscores how serious and all-encompassing the problem of plastic pollution has become – even in seemingly untouched areas. “In such areas, efforts to reduce plastic pollution typically focus on the visible garbage, while less attention is paid to microplastics,” the researchers say. However, the new findings demonstrated that it is important to find solutions for microplastic pollution as well.

The Mirai doesn't look that bad in its second appearance, but Toyota Modellista makes an effort to make it even cooler. Well, hydrogen. One...
Read more

For the first time in 13 years, Fiat has introduced a completely new 500. The retro field is currently only available as a...
Read more

As a kind of advertisement for the cliffhanger: transmission tuning for the BMW 325 endurance tester. It is of course two huge blemishes: a diesel...
Read more

Long-necked Dinosaurs: Careers in the Heat

Which fine dust is particularly harmful

The researchers have detected the anthropogenic mercury in representatives of the bizarre disk-bellied fish (Liparidae) from the Mariana Trench. (Image: Jeff Reid) Even the...
Read more
Earth & Climate

How bacteria release arsenic into groundwater

(Image: DLR / CC-by 3.0)At first glance, the snapshot of the week just shows some ice floes on the dark sea. But on...
Read more
Earth & Climate

This is what Kylinxia zhangi might have looked like while she was alive. (Image: D.-Y. Huang and H. Zeng) Arthropods such as spiders, insects...
Read more