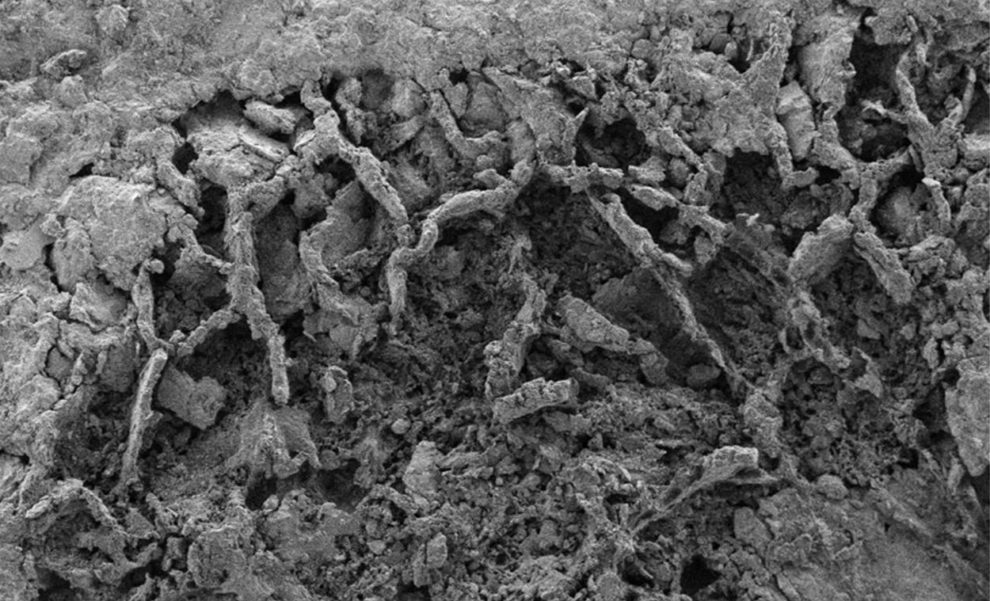 Mushrooms are among the first organisms to colonize the primeval land masses. However, it is not yet clear when exactly the early mushrooms developed. Researchers have now discovered the oldest fossilized mushrooms known to date in a rock formation in the Democratic Republic of the Congo. The filamentous, networked relics are already 715 to 810 million years old and thus at least 250 million years older than all previously known mushroom fossils. The presence of the biopolymer chitin in the cell walls of these fossil filaments proves that they are clearly fungi and not similar looking bacterial threads, as the researchers emphasize.

Whether as thready mold, tiny spores or “classic” hat fungus – mushrooms occur in innumerable forms and almost everywhere. With 2.2 to 23.8 million species, they form the second largest group of higher organisms on our planet after animals. However, only a tiny fraction of this enormous variety is known and described – according to estimates, we only know between two and eight percent of all mushroom types. Our knowledge of the evolution of fungi and the first appearance of these organisms is even more incomplete. Because fossils of earlier fungi are rarely preserved, and it is usually difficult to distinguish fossil fungal threads from similar filaments of unicellular bacteria or blue-green algae. However, the oldest clearly identified mushroom fossils to date are around 460 million years old. Their discovery suggests that prehistoric mushrooms may have been among the first living things to populate the country. So far it is unclear when these very first mushrooms developed.

Now paleontologists around Steeve Bonneville from the Free University of Brussels have made a discovery that sheds new light on the origins of the mushrooms. In a rock formation from the south of the Democratic Republic of the Congo, they discovered the relics of a network of threadlike structures that strikingly resembled a mushroom mycelium. The fossils were embedded in sediment that had accumulated on the edge of a flat coastal lagoon between 715 and 810 million years ago. Closer analyzes of the filaments, which are only a few micrometers thick, showed that, similar to fungal mycelia, they branched and fused together again. “Such a structure is common in fungal networks, but is rare in prokaryotes,” the researchers report. Cell walls within the thread segments were also visible in the electron microscope, and the size of the threads matched that of fungal mycelia well.

“However, in order to determine without a doubt whether these filamentous networks are fungal or bacterial remains, a more detailed chemical determination is necessary,” emphasize Bonneville and his colleagues. For this reason, the researchers used a special dyeing method to demonstrate the presence of chitin in the fossil filaments. While this biopolymer is common in many animal groups and some higher algae, it is absent in bacteria and other prokaryotes. “The presence of chitin in our filaments would therefore be a strong argument for belonging to the mushrooms,” explain Bonneville and his team. In fact, the analyzes showed that both the outer walls of the fossil filaments and the internal cell walls contain chitin. The researchers were able to confirm this finding using spectroscopic analyzes and confocal laser fluorescence microscopy.

Oldest mushroom in the world

According to Bonneville and his team, it is clear that these fossils must be mushrooms – the oldest known to date. Because, based on the age of their find layer, they are already 715 to 810 million years old. “This discovery is more than 250 million years older than all previously known mushroom fossils,” the researchers state. “At the same time, these finds support the assumption that mushrooms played an important role in the first colonization of land.” According to common theory, the first real land plants only developed around 500 million years ago – long after these mushrooms settled in the primeval coastal landscape. Their presence supports the assumption that fungi and possibly symbioses of fungi and algae paved the way for rural life. “This is an important discovery that gives reason to rethink our timeline of the evolution of organisms on Earth,” says Bonneville.