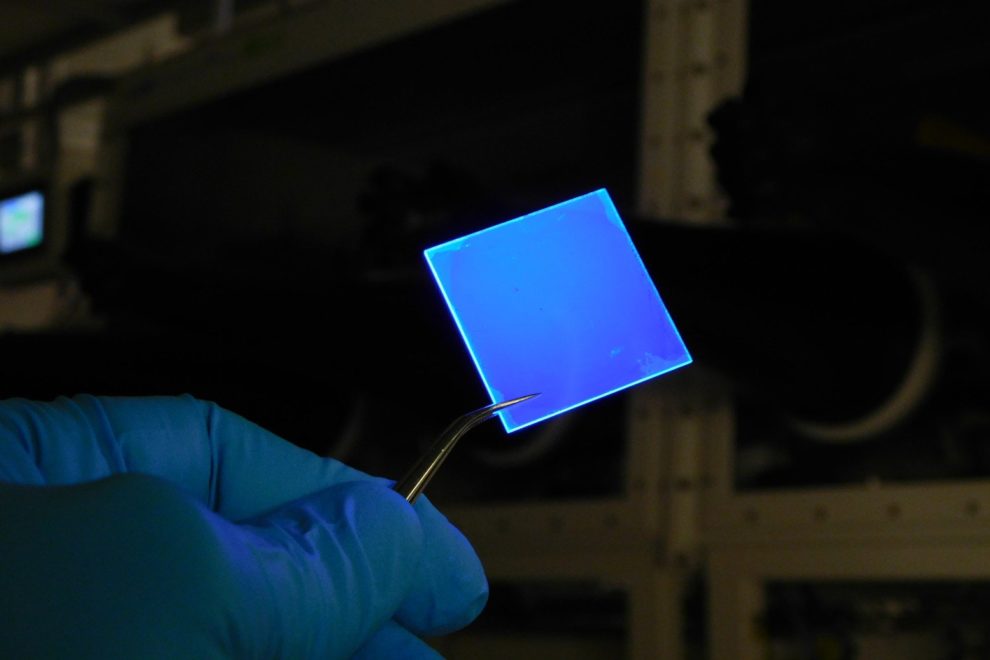 Brilliant colors and the lowest possible energy consumption are required in screen technology – but the second point has so far failed: the modern light-emitting diodes emit their light in all directions. Researchers have now been able to significantly reduce these scattering losses: They have developed a sophisticated light source that shines particularly intensively towards the viewer, so that a lot of energy can be saved.

For some years now, a new technology has allowed screens and displays to shine: the so-called quantum dot LEDs (QLEDs) can produce particularly bright and intense colors. Their effects are based on the characteristics of many tiny semiconductor nanocrystals, which are also called quantum dots. These nanocrystals are excited from behind with UV light on a screen. The crystals then convert this radiation into colored light in the visible range. Depending on the material composition of the nanocrystal, a different color is created.

However, there is a catch with the previous QLED technology: The nanocrystals are spherical and therefore scatter the generated light in all directions when excited. This means that the inside of the screen is uselessly illuminated – only around a fifth of the light generated radiates out of the device and is visible to the viewer. This is a waste of energy and anyone who has ever reached the limit of the battery power of cell phones and the like knows that the screen performance contributes significantly to the energy consumption of devices.

In order to increase the energy efficiency of QLED technology, scientists have been working on nanocrystals that emit light in only one direction for some time. The working group headed by Jakub Jagielski from ETH Zurich also pursues this goal. Instead of spherical structures, ultra-thin nanoplates are supposed to solve the problem by emitting light at right angles to the plane of the platelet. As Jagielski and his colleagues report, this strategy has so far not been successful. The problem: The nanoplates produce comparatively weak light. If, however, they are stacked on top of each other in order to compensate, the problem again arises: the plates interact and the light is no longer emitted in one direction, but again all around.

But Jagielski and his colleagues have apparently found a solution: They have stacked structures made of 2.4 nanometer-thin semiconductor wafers in such a way that they are separated from each other by a fine insulating layer made of organic molecules. This layer prevents the interactions, so that the platelets emit light predominantly in only one direction, even in a stacked arrangement. “The more tiles we stack, the more intense the light becomes. In this way we can influence the light intensity without losing the preferred direction of emission, ”Jagielski sums up.

With their method, the researchers have already been able to produce a quantum dot light-emitting diode for blue light, in which twice as much light reaches the eye of the beholder as in conventional versions. “This means that in order to generate light with a certain intensity, we only need half as much energy with our method compared to conventional QLED technology,” says co-author Chih-Jen Shih. The researchers are now working to achieve similar efficiency for diodes for the other colors. According to them, the color red is obviously a special challenge.

But what about the effort for the production? According to the developers, the novel stacked QLEDs can even be produced particularly easily in a single step. There is therefore considerable potential. So it will be interesting to see if and when the innovative technology from Switzerland finds its way into screen technology.

Buy Office: What you want to know about Microsoft 365

There are several ways to buy Office. The offer can be confusing, which is why Microsoft is...
Read more
Computer & Phone

A mixture of moon dust, water and astronaut urine could be used to build lunar stations. (Image: ESA, Foster and Partners) A golden resource for...
Read more
Computer & Phone

There are three ways to reset Windows 10

While Windows 10 is a reliable operating system, things can sometimes go wrong. Sometimes then the only...
Read more
Computer & Phone

At a time when we all need to stay indoors as much as possible, you may be...
Read more
Computer & Phone

AI systems can convert brain signals into speech. (Photo: Andreus iStock) When a person loses the ability to speak, it is a drastic cut in...
Read more
Computer & Phone

Synology of Qnap: Differences and Similarities

A nas provides central storage space in a network, with the advantage that you can access the...
Read more