News from the asteroid Bennu 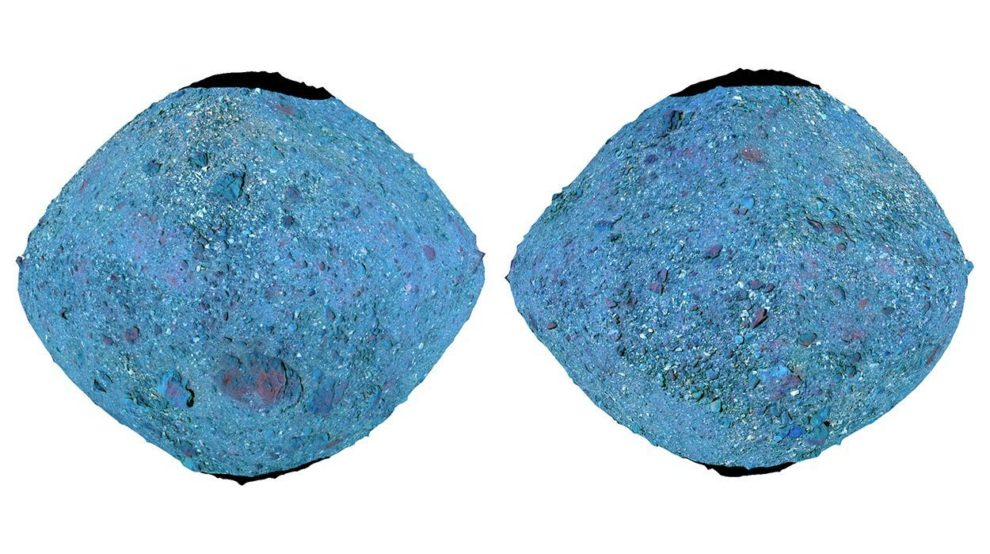 In around ten days, NASA’s OSIRIS-REx spacecraft will take a sample from an asteroid for the first time and then bring it back to Earth. But the probe has already provided valuable information about the asteroid Bennu. In six specialist articles, scientists have gained new, sometimes surprising information on the nature, surface and chemical composition of the approximately 500-meter-large asteroid. The chunk apparently has larger cavities and thinner zones inside than expected – it resembles a praline with a soft filling. Measurements also showed that relatively original material from deep layers of the asteroid was revealed at the planned location of the sampling.

The dark-colored asteroid Bennu is one of the so-called Earth orbit cruisers: its elliptical trajectory around the sun regularly brings it close to the earth. So far, astronomers cannot rule out that it could even become dangerous for our planet in around 150 years. However, according to previous knowledge, the probability of this is only 0.07 percent. Nevertheless, this risk makes it all the more important to know the exact properties of the asteroid, because they influence whether and how the orbit of the object could change over the next few decades. NASA’s OSIRIS-REx spacecraft has been orbiting the almost diamond-shaped asteroid since 2018, performing numerous measurements. Several research teams have now evaluated this data and report on it in six publications. They also serve to prepare for the sampling on October 20, 2020: The space probe will approach Bennu’s surface within a few meters and take samples from the surface with a robotic arm. The material will then bring OSIRIS-REx back to Earth – it will be the first mission of its kind.

One of the new results concerns the nature of the rock at the planned “Nightingale” sampling site, an area covered by rubble on the northern half of the asteroid. Several months ago, the first measurements suggested that there might be hydrated minerals in this area – rocks that contain hydroxyl molecules (-OH). The current data now confirm this and show that many of the primarily dark lumps at the sample site also have light-colored veins made of carbonate rock. These minerals are considered to be signs that the rock has formed in the presence of water. “The abundance of carbonaceous material is a major scientific triumph for the mission,” said Dante Lauretta of the University of Arizona at Tucson, one of the scientific directors of the OSIRIS REx mission. “We are now optimistic that the samples that we want to collect and bring back also contain organic material.” These samples could also provide new insights into the role asteroids like Bennu played in the early days of our planet – as suppliers of organic molecules and water.

Further measurement data revealed that both the primary sample site “Nightingale” and a replacement site are covered by regolith, which was only exposed to the effects of space for a relatively short time. While a large part of Bennu’s surface is heavily weathered due to the influence of cosmic rays and therefore appears bluish in the space probe’s spectral measurements, this is different for the sample regions. Their rock is more reddish in spectral terms and this suggests a more pristine composition which suggests a brief exposure of the material. “Both the primary and secondary sample sites are located in small, spectrally reddish craters that are less weathered than the rest of Bennu’s surface,” explains Kevin Walsh of the Southwest Research Institute. Sampling could thus offer the researchers the chance to obtain very primeval material that had long been hidden inside the asteroid.

The data from the OSIRIS-REx space probe has also provided new insights into the interior of the asteroid – and a happy coincidence came to the rescue. Because originally the gravity influence of the asteroid on the orbiting probe was supposed to provide information about its density and internal composition. After the space probe reached Bennu, however, its cameras showed an unusual phenomenon: Time and again, smaller pieces of rock detached themselves from the surface of the asteroid, orbited it for a while, and then fell back again. “It was like someone throwing these marbles up on the surface so we could follow their path,” explains Daniel Scheeres from the University of Colorado in Boulder. “Our colleagues were then able to infer Bennu’s gravity field from their trajectories.” The subtle spatial variations in the gravity field in turn allow conclusions to be drawn about where inside the asteroid more dense and thus more massive or less compact zones are.

The analysis of the data showed that the interior of Bennu is composed differently than previously assumed. Because of its rather low overall density, astronomers had previously suspected that it belonged to the class of “rubble pile” asteroids – objects that consist of rather loosely agglomerated rock. The new data now show that this debris is very unevenly distributed: In the center of the asteroid and along its equator, zones with a noticeably low density are accumulating – they may even be cavities. “It seems as if there is a cavity in the center that several football fields would fit into,” says Scheeres. Overall, Bennu is more like a praline with a porous core and hard shell than a classic pile of rubble. The researchers suspect that the extremely fast rotation of the asteroid has redistributed its interior over time in such a way that denser material has collected further outside. If this trend continues, Bennu could someday tear apart through his own rotation. “In maybe a million years or even less, the whole object could fly apart,” says Scheeres.

Call sign is MINI GP, but the full name of this trio in the driving test is: MINI John Cooper Works GP. The...
Read more

Fans who fear that F1 is doomed to disappear can take a breath again. Mercedes does not want to leave the sport yet. Hopefully...
Read more

Who does not let themselves be beaten by the Fado in qualifying for the Grand Prix of Portugal? The winding and hilly circuit of Portimão,...
Read more

Are planets siblings of their stars?

Stars and planets grow together, suggesting the structure of matter around a protostar that is still growing. (Image: MPE / D. Segura-Cox) A...
Read more
Astronomy

Star death at the black hole

Artist's impression of a star being torn apart by the tidal action of a supermassive black hole. (Image: ESO / M. Kornmesser) The supermassive...
Read more
Astronomy

Ceres: Salty water in the underground

In this representation of a region in the Occator Crater of Ceres, the salty liquids are highlighted in red, which were pushed up from...
Read more
Astronomy

A Milky Way analogue in the early cosmos

The light of the galaxy SPT0418-47 is distorted by the gravitational lens effect and appears as a nearly perfect ring of light. (Image:...
Read more
Astronomy

The strong plasma eruption (left) from Betelgeuse turned into a cloud of dust that obscured the view of the star. (Image: NASA, ESA,...
Read more
Astronomy