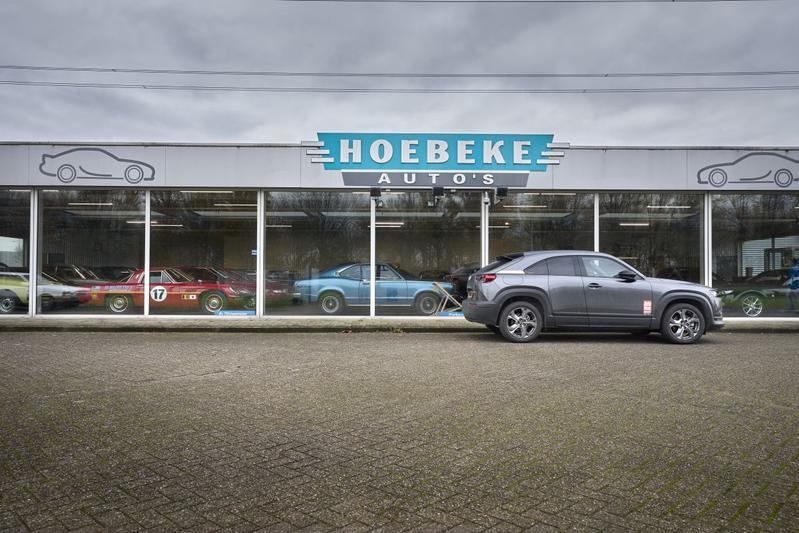 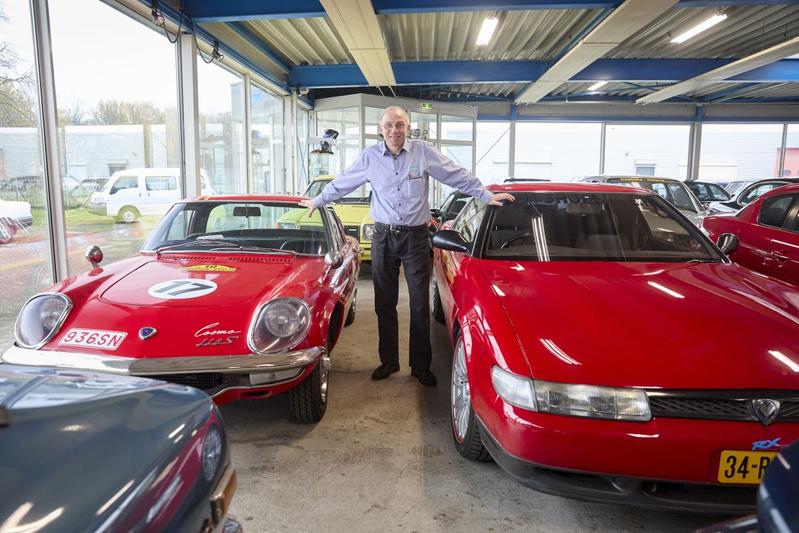 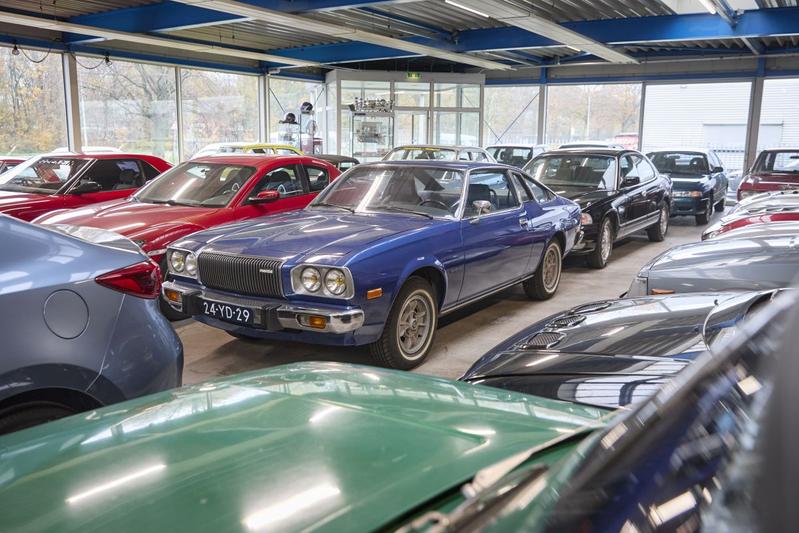 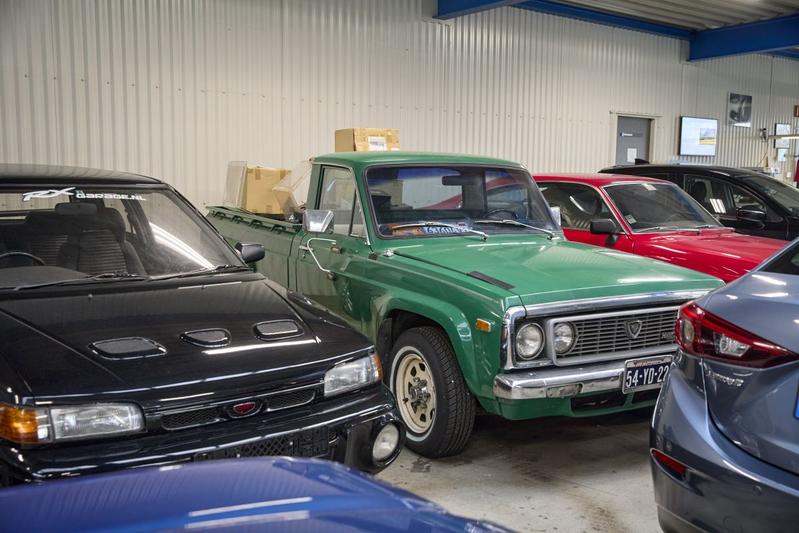 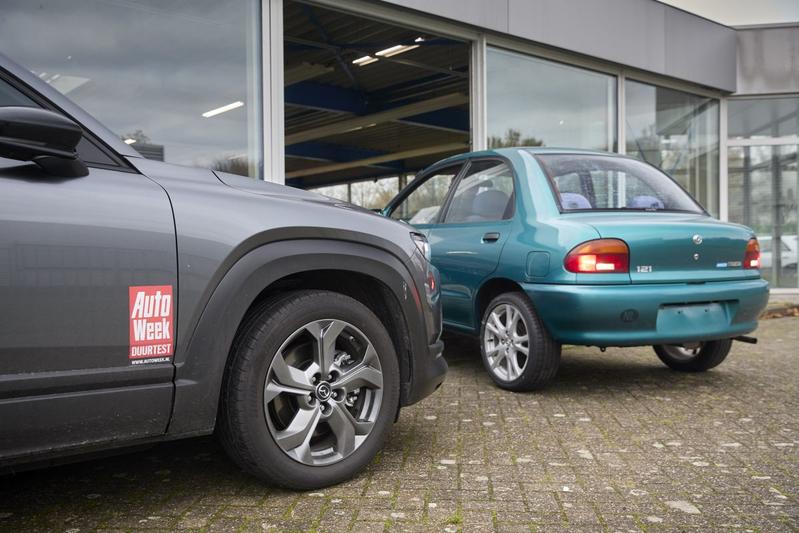 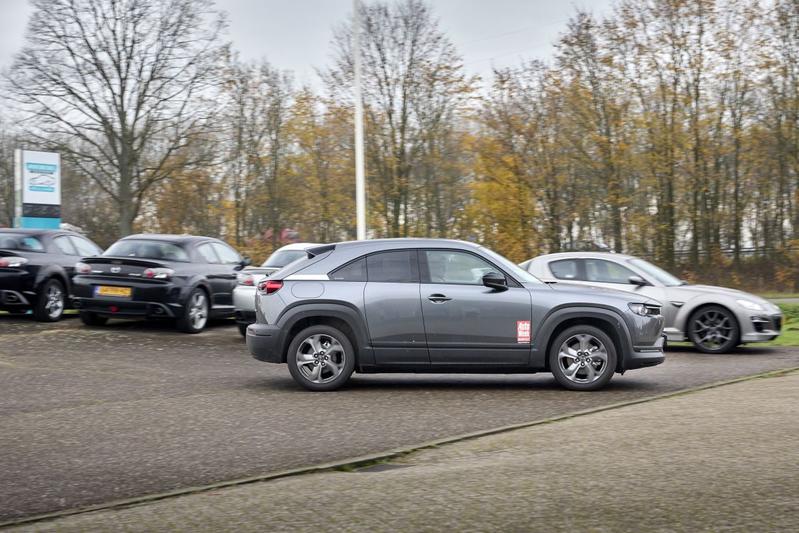 With the Mazda MX-30 we have an odd duck in our endurance test. Not only is it the first electric car from a brand that seemed to deny the transition for a long time, with its typical silhouette and suicide doors, it is also a special thing on the outside. And if you like special Mazdas, you should visit Kees Hoebeke from Rilland. The last ride as an endurance tester takes our MX-30 to the mecca for Mazda enthusiasts.

Rilland: it forms the umbilical cord that connects Walcheren with the rest of the Netherlands and if a landslide ever occurs, it does not even have to be that heavy to make Rilland end up in Belgium. But for lovers of special Mazdas, this Zeeland village has a completely different meaning. Because this should be the center of the Netherlands for them.

If you drive on the A58 to Middelburg, in the corner of your eye you may see a thousand-in-a-dozen garage company on a service road near Rilland. Hopefully your co-driver will take a closer look and he will hardly believe his eyes, because the showroom of car company Hoebeke is a real treasure chest for anyone who considers rare Mazdas to be jewels. An entire battery of RX-8s for the property is just the tip of the iceberg. Rilland is therefore a perfect destination for a day out with our Mazda MX-30 endurance tester.

Well, perfect: if there is one thing to criticize about the MX-30, it is its limited range. The route planner predicts I have 75 miles to go before rolling into Rilland. Of course the car has spent the night on the charger and yes, the on-board computer promises me 179 carefree kilometers. They effortlessly bring me to Rilland and beyond, but we also have to film there (the farewell video, because this is the last mission of this endurance tester) and photograph. Moreover, Rilland does not seem to be the epicenter of fast charging Netherlands. A challenge, but we like that.

Now I hate showing up too late for an appointment, so I always calculate a nice safety margin for the outward journey and then I use that, if it turns out not to be necessary, by hooking up to a fast charger just before the final destination . Unfortunately, the traffic around Rotterdam is a bit disappointing, so I don’t have that escape this time. Fortunately, Kees Hoebeke has already sold some MX-30s, so he knows the limitations and also knows that I come from far. Even before we sit down for coffee, the MX-30 is already on Kees’ charger behind the building. It is one of the trickle charger type, but every little bit helps and after a quick look in the showroom I suspect that I will be here for a while. 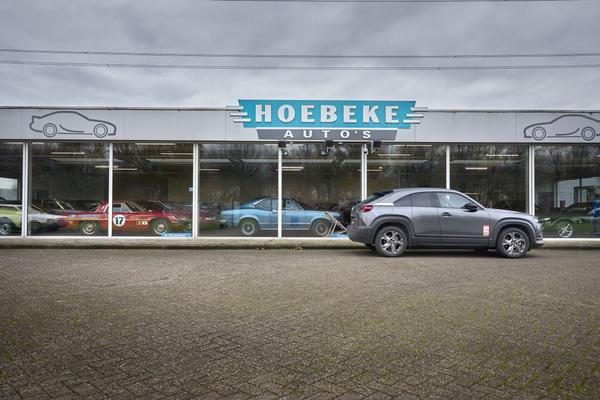 While Kees takes care of some business and the battery of the MX-30 painfully slowly consumes economical Zeeland kWh, I muse through the showroom between dozens of Mazda’s from the past, many of which I don’t even know. Well-known, but also rare – especially in these numbers – is the RX-8. Not only is there a whole row outside, several copies are also shining inside. This is also Kees’ speciality, he says. Other than its looks, what makes this car so special? “The emotion of an RX-8 is unique,” ​​says Kees. “The rotary engine combines little weight with a lot of power. In its day, the RX-8 had about thirty percent more power than a comparable car, combined with a vibration-free running.”

That’s great, but what about those ghost stories that you need a new one every thirty thousand kilometers with a Wankel engine? Kees does not completely contradict this, but does want to put it into perspective. “A lot of people didn’t understand the rotary engine,” he says. “Certainly, if used incorrectly, such an engine broke down earlier, but it was not as bad as was often thought. They are cars with a manual. From cold you have to let the engine warm up very slowly. At the time, the factory gave 15,000 km for the oil change, but that is far too long. I keep it at 7,000 km or after a year,” says Kees. He notices himself that his adjusted service interval is working. “I had a customer who had 220,000 km on his RX-8, which he bought new.” Partly for this reason, you have to be even more careful when purchasing a used RX-8 than with any other car, warns Kees: “A copy that has had several owners can be vulnerable. After all, you don’t know how they dealt with it.” 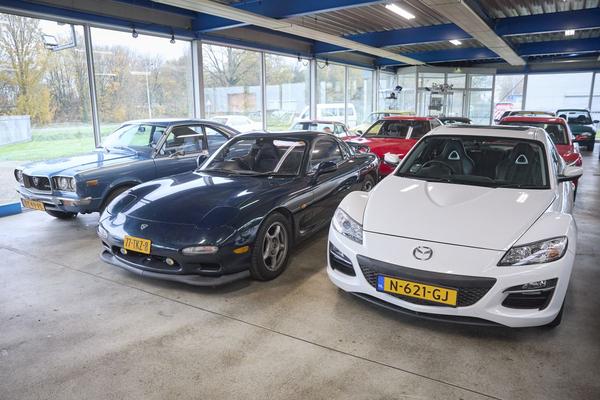 That is exactly what is so great about the burgeoning EV era, says Kees: “You don’t have those problems with an electric car. Everything works optimally right away; not just the engine, but even the heating. And you can also use it optimally from the start, without anything breaking.” Now our MX-30 certainly has similarities with the now quite legendary RX-8. To what extent is this comparison justified, according to Kees? “Of course it’s those rear doors – which Mazda calls Freestyle Doors – that wink at the RX-8, but thanks to the electric motor you also have that vibration-free feeling,” he explains. As a Mazda specialist, Kees has now also sold some MX-30s. What does he think of Mazda’s first real EV, especially the limited range? “Mazda has really developed it as a second car, whether for city traffic or in the region. You have to explain that to buyers. When they understand that, the disadvantage disappears. Other than that, it’s a very nice car to drive, nice and light-footed.”

The Rilland entrepreneur often sells the MX-30 to people who drive CX-30 and still buy a new one every few years, he explains. “Then it’s easy to get into an MX-30 once, provided they usually make shorter journeys. If they then have to go a little further, the inconvenience for that one time is also manageable.” However, he also has many caravan drivers among his customers and the MX-30 is obviously not an option for them. But the majority of the people he sold an MX-30 to are very positive about the car.

And then the inevitable question for a true Mazda enthusiast: what must a car have in it to be a Mazda? “It is a proven DNA”, says Kees. “And that is mainly in the chassis and the engine. At least the MX-30 has it.” But are we going to experience that Mazda is also definitively switching to electric drive? “In the end, of course, but I doubt that the combustion engine will really be phased out that quickly,” says Kees. “The Japanese brands in particular are like that. They sell their cars all over the world and, for example, in Africa they must also be able to continue driving. In addition, many people simply cannot afford an EV, and will continue to do so for years to come. Internal combustion engines are still not fully developed. Just look at the progress Mazda continues to make with its SkyActiv engines. We cannot do without diesels yet.” Besides rationality, there is also a lot of emotion in him. As far as he is concerned, driving is more fun the older the car is. “In a really old car you are still a driver; open the fuel tap, set pre-ignition and post-ignition, that sort of thing,” he says. And he should know: “I have about a dozen cars over forty years old to my name.” 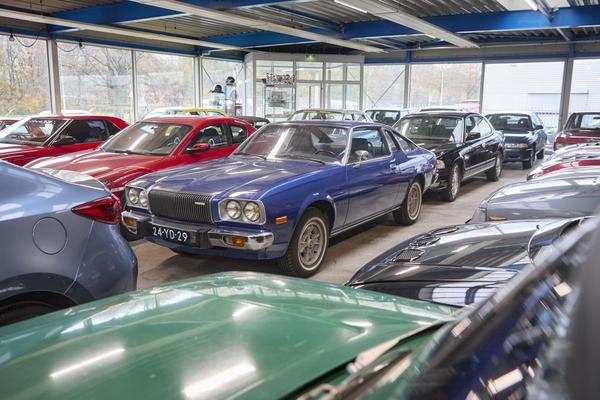 That said, Kees starts his tour. That brings us to a huge, fiery red sports coupe that almost literally splashes the nineties. While I’m still taking in the lines, Kees pulls open the hood of the Eunos Cosmo. “This was the first Mazda with a three-disc rotary engine. It is quite rare, as only about 3,500 were built. I have no idea how many are left, but I do know that quite a few have been stripped of their engines to fit them into an RX-7,” he says. Apart from its unique engine, the Cosmo was also special because it was the first Japanese car with factory navigation. “In fact, you could even order it with television.” At the other end of the spectrum is the 121 that Kees shows: “This bowler hat became a design example for many other brands. Still, it was not so suitable for the European market, but it was all the more popular in its own country. The Japanese loved small sedans.” 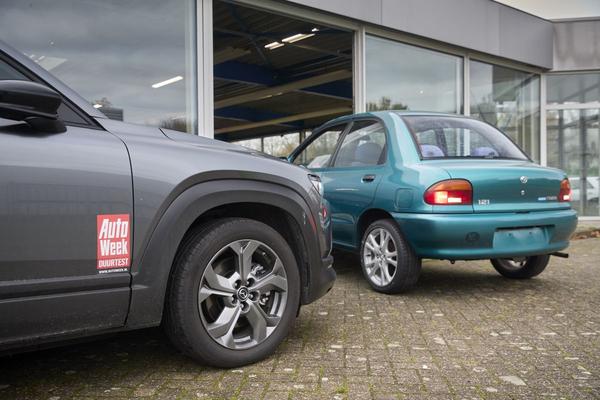 The question that you should naturally ask any avid collector is what his most special car is. Kees doesn’t have to think about that for a second, he walks straight towards a sports coupé, which is competing next to the Eunos ‘who is the reddest’. “This Cosmo 110S”, it sounds decidedly. “The Cosmo was shown at the Paris salon in 1968 and was so successful that Mazda came up with an export model, the 110S. They didn’t even bother to move the handlebars to the left. This is an early, short wheelbase. Only 343 of these were built, about a thousand of the version with the longer wheelbase,” says de Zeeuw. Here too Kees has a disc first. “This was the first Mazda with a two-disc rotary engine.” 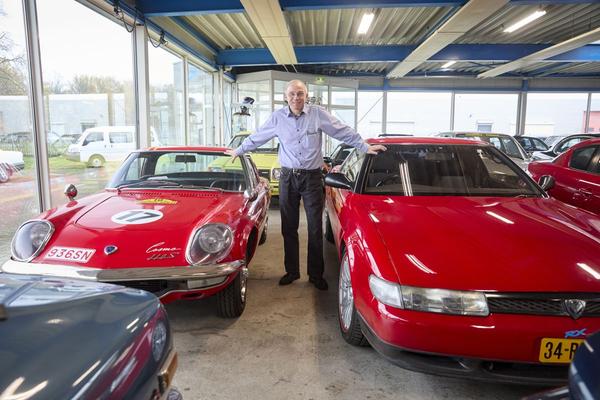 When we have seen and admired everything, it is time to say goodbye. Goodbye to Kees and his collection, but – with a long drive home that starts with a fast charger – also goodbye to our MX-30. It is ready for its first unknown owner and we hope he will enjoy his car as much as we did. And we also hope that we will be able to visit Kees Hoebeke again in a few decades, that we will ask him again what his most special Mazda is, that he will then walk to an old, lived-in, dark gray MX-30 and lovingly ride on the hood is correct. And then he says, “This one. It was not Mazda’s best car, but it was the very first without such an old combustion engine. And this example is extra special, because it started its life as an endurance tester for a car magazine.”

For the purist ...
Read more
Cars