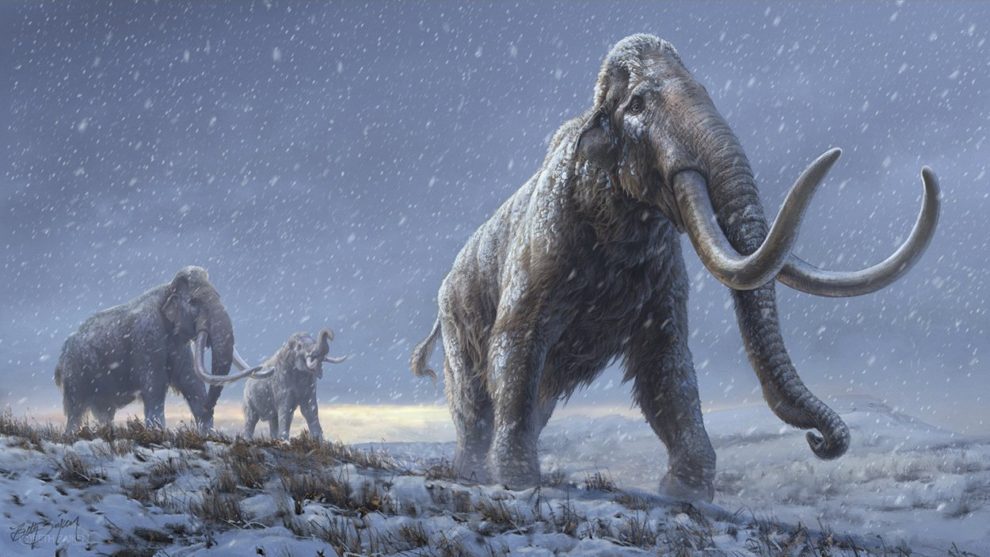 The frozen ground of the permafrost areas has once again proven to be an astonishingly good time capsule: Researchers have succeeded in extracting and sequencing genetic material from mammoth relics that are more than a million years old. The DNA of the animals is the oldest ever successfully examined. In addition, it also reveals news about the tribal history of the Ice Age proboscis. Because the oldest mammoth was not a woolly mammoth, but belonged to a previously unknown Eurasian species. The North American prairie mammoths could have emerged from this by crossing with the Siberian woolly mammoth.

The mammoths are the largest and probably best-known representatives of the Ice Age fauna. The predecessors of the hairy and cold-adapted proboscis probably originated in Africa around five million years ago before they spread northwards and finally colonized the entire northern hemisphere. Around 2.5 million years ago, the southern mammoth (Mammuthus meridionalis), which was still very elephant-like, first developed and then the steppe mammoth (Mammuthus trogontherii). According to popular theory, the steppe mammoths that immigrated to North America via the Bering Strait developed into the prairie mammoth (Mammuthus columbi) around 1.5 million years ago, while the woolly mammoth (Mammuthus primigenius) spread in Siberia and Northern Europe. These two species survived the Ice Age the longest and were particularly well adapted to the harsh climate of the Ice Age steppes and tundras thanks to their thick fur and their tolerance to cold.

First reconstruction of DNA over a million years old

However, how and when the prairie mammoth came into being and how it is related to the woolly mammoth has been unclear so far. To gain more clarity, Tom van der Valk from the Center for Paleogenetics in Stockholm and his colleagues have now tried to obtain primeval DNA from the fossilized teeth of three mammoths. These were found in the permafrost in northeast Siberia. Because this permanently frozen ground prevents cell components and molecules from decomposing, there was hope of being able to isolate and sequence fragments of genetic material from the tooth material. The oldest of the three mammoth relics, named “Krestovka” after the place where it was found, is between 1.2 and 1.6 million years old and shows the characteristics of a steppe mammoth. The second, Adycha, was also similar to the steppe mammoth and is around 1.3 million years old. The third tusk, Chukochya, on the other hand, comes from a woolly mammoth and is around 680,000 years old.

The researchers succeeded in isolating enough genetic material fragments from all three relics to sequence the almost complete mitochondrial DNA of these three mammoths. This type of DNA does not belong to the genome in the cell nucleus, but rather lies in the mitochondria, the power plants of the cell. Because these are only passed on through the maternal line, this DNA is particularly suitable for reconstructing family relationships. The extraction of this DNA from fossils more than a million years old is a first: the oldest sequenced DNA to date was isolated in 2013 from a 700,000-year-old ancient horse bone. The current study now shows that the permafrost can also preserve older genetic material sufficiently well. “One of the big questions is how far back we can go,” says van der Walk’s colleague Anders Götherström. “I suspect that we can restore DNA that is two million years old, probably even 2.6 million years ago.” Because there was no permafrost before, this is the ultimate limit.

Prairie mammoth was a hybrid

However, it is also interesting what the comparison of the three mammoth genomes revealed about the evolution of the Ice Age proboscis. Because he revealed that Krestovka, the oldest mammoth, belonged to a previously unknown tribal line of mammoths. This must have separated from the line of all other Siberian mammoths at least two million years ago. “That was a complete surprise for us,” says van der Walk. “All previous studies indicated that there was only the steppe mammoth in Siberia at that time. But our DNA analyzes show that two different genetic lines existed – it may even have been two different species of mammoth. ”According to genetic comparisons, it was the Krestovka mammoth and not the steppe mammoth that migrated from Siberia to North America around 1.5 million years ago . The first mammoths on this continent belonged to this recently discovered line – and it was from this line that the prairie mammoth later developed.

However, another actor was involved in the creation of the prairie mammoth, as the researchers report. According to this, around 40 percent of its genome comes from the Krestovka mammoth, while around 60 percent comes from the woolly mammoth. “This is an important discovery,” says co-author Patricia Pecnerova from the Swedish Museum of Natural History in Stockholm. “It seems that the prairie mammoth, one of the icons of the North American Ice Age fauna, developed through a hybridization that took place around 420,000 years ago.” Apparently woolly mammoths from Siberia migrated to North America via the Bering Strait, where they then moved with the there mated already living Krestovka mammoths.

The genome comparison of the three fossil mammoths also revealed that, contrary to previous assumptions, even the oldest mammoth forms were adapted for cold climates. Because the gene variants that gave the proboscis their thick coat, their insulating layers of fat, the cold tolerance and other adaptations to the arctic environment, already existed in Adycha, the mammoth fossil that still corresponded to the steppe mammoth type. “Our analyzes show that most cold adaptations were already present in the ancestors of the woolly mammoth,” says van der Walk’s colleague David Diez-del-Molino.