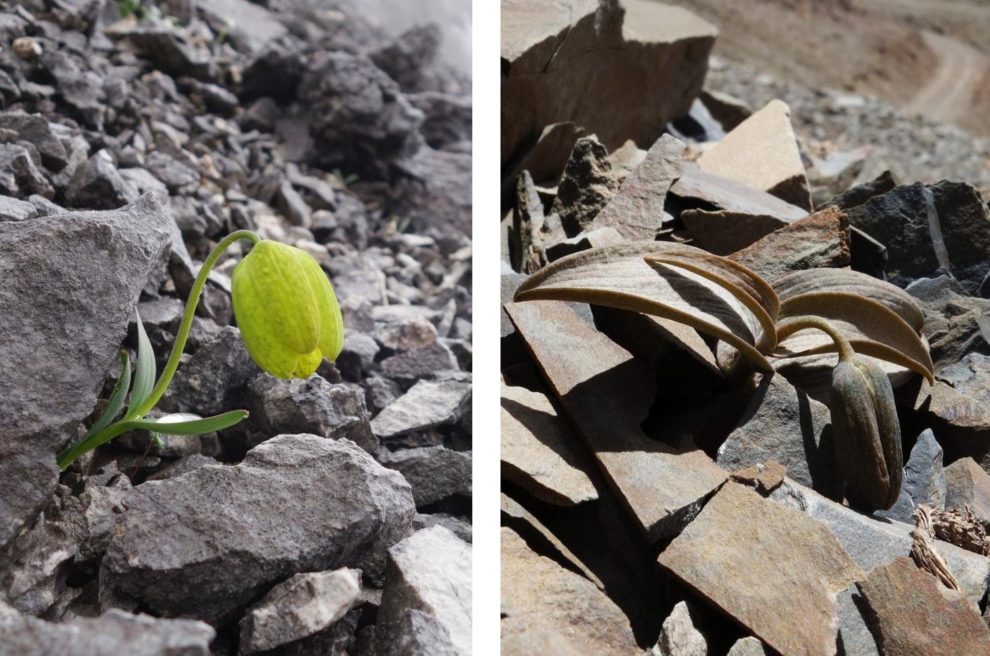 A special kind of evolution: humans have turned a medicinal herb from traditional Chinese medicine into stone, researchers report. In some locations in the Himalayan region, these plants have developed a camouflage that protects them from the eyes of foragers. Usually their leaves are green and the flowers are yellow. If you tear them up, however, they bring out different camouflage colors that match the respective appearance of the surrounding stones. This makes it difficult for people to see them, tests confirm.

Just don’t attract attention! In order to avoid the hungry glances of predators, many living things try to blend in with their environment using colors and patterns. For example, a green frog makes itself invisible in the grass. In addition to animals, there are also known plant species that have adapted their shapes and colors to the environment in order not to attract the attention of herbivores. These features are the result of the evolutionary principle of selection pressure: for example, a frog whose shade of green does not match the surrounding vegetation is more likely to end up in a stork’s beak than its colleague with a more harmonious camouflage color. Over generations, such a selection can lead to significant changes in characteristics or even to the formation of new species.

A Chinese medicinal herb in sight

The fact that not only animal enemies but also humans can change the characteristics of living beings through selection pressure has already been documented in some wild animals. But now the researchers led by Yang Niu from the Kunming Institute of Botany at the Chinese Academy of Sciences have also found the effect on a plant species. It is an Asian relative of our native material flower. Fritillaria delavayi is common in the Himalayan region and grows there on slopes between rocks and stones. The lily plant forms a bulb in the subsurface that collectors are after. Because F. delavayi has been used in Chinese medicine for over 2000 years. The plant’s bulb fetches high prices. This is why it is often pulled out of the ground in some areas of its range.

It was already known that F. delavayi occurs in different color variations, the scientists report: There are “normal” looking plants with green leaves and yellow flowers, but also amazingly “stone” looking variants in gray and brownish colors that go with the respective background seem to fit in with the location. As part of their study, the researchers examined what this is all about. “As with other camouflaged plants that we examined, we initially thought that the development of camouflage in F. delavayi was also driven by herbivores,” says Niu. “But we couldn’t find such animals”.

According to the researchers, there are no bite marks on F. delavayi. As they explain, the plant is avoided because it forms alkaloids as defense substances. Ironically, it is precisely these substances that are the reason why humans threaten the plant. Presumably, they form the basis of the medicinal properties that are said to be. Against this background, the suspicion arose that humans were the drivers of this development in camouflage colors. The scientists followed up on this trail through further research. To this end, they systematically recorded how well the plants from different populations matched their respective mountainous surroundings and how easy they were to collect there. They also evaluated further information and interviews with local residents to determine how much the plants were used at the various locations.

It was shown that the degree of camouflage of the plants correlated with the exposure to humans. In areas where the plants were difficult to access, they developed the apparently original green leaf and yellow flower color. Wherever they were collected a lot, however, the colors were adapted to the surrounding rock, the evaluations showed. Through tests, the researchers were also able to show that the color adjustments actually significantly limit the ability of test subjects to locate the plants on photos in the rubble.

The results show that humans “drive” the evolution of this species into new color forms because better camouflaged plants have a higher chance of survival, the researchers sum up. “It is interesting to see how humans can have such a direct and clear influence on the coloration of a wild plant – not only on its survival, but also on its evolution itself,” says co-author Martin Stevens of the University of Exeter.

“It is possible that humans have also advanced the evolution of defense strategies in other plant species. But little is known about this so far, ”says Stevens. He and his colleagues are therefore now encouraging other researchers to look for further examples. Senior author Hang Sun from the Kunming Institute for Botany concludes: “The development of biological diversity on earth is no longer only shaped by nature, but also in some cases intensively by humans”.

As a kind of advertisement for the cliffhanger: transmission tuning for the BMW 325 endurance tester. It is of course two huge blemishes: a diesel...
Read more

On the left an F. Delavayi plant with a "normal" appearance, on the right a specimen that can hardly be recognized due to the...
Read more

Volkswagen expects it to be easier to meet the European CO2 standard in 2021, CEO Herbert Diess reports. This is mainly because Volkswagen...
Read more

Subaru explains why the BRZ does not have a turbo

Subaru could easily have screwed a turbo to the BRZ, but did not want to do that. It was a common complaint about the BRZ...
Read more

Why do parent birds throw their young out of the nest?

Young bird of the willow yellow throat marked with a sensor. (Image: Todd Jones / University of Illinois) Many songbird parents throw their not...
Read more
Biology

Migrating geese. (Image: phalder / iStock) Many animal species migrate long distances year after year between the areas where they raise their offspring and...
Read more
Biology

Photosynthesis in the spotlight

Researchers want to make better and better use of the power of light. (Image: AzmanL / iStok) The light of the sun provides energy...
Read more
Biology

There are strong country differences in terms of fertilizer use and irrigation, as can be seen here on the border between Kazakhstan and China....
Read more
Biology

Female and young of the Popa langur (Trachypithecus popa). Photo: (Image: Thaung Win) The most species-rich genus of the long-tailed monkey and colobus monkey,...
Read more