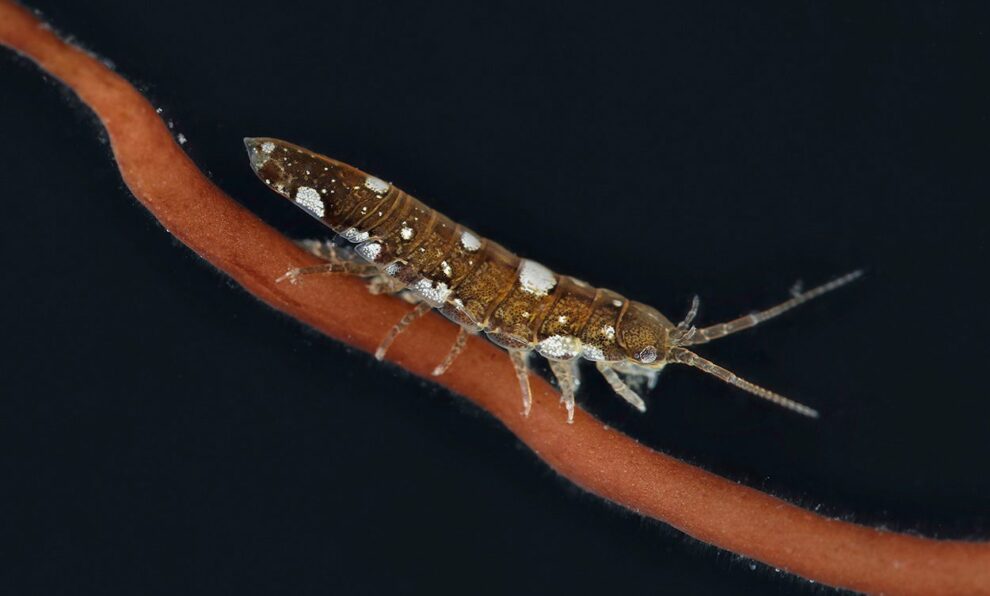 Most flowering plants on land are pollinated by insects. But apparently this type of reproduction is not reserved for land plants: researchers have now discovered that small sea crabs help to fertilize red algae. Similar to bees, they carry the sperm cells from the male plant to the female. While scientists have long assumed that animal-mediated pollination first evolved in land plants around 140 million years ago, the new results suggest a similar evolution took place millions of years earlier in water.

Pollination by animals is considered a typical feature of flowering plants on land: insects or small birds fly from flower to flower in search of food, spreading the pollen that gets caught on them. But apparently animals can also play a role in the reproduction of marine plants. In 2012, researchers discovered that small marine animals that live in seagrass pollinate it. So far, however, it was unclear whether this is a rare exception or whether animal-mediated pollination also plays a role for other aquatic plants.

Teamwork of red algae and crab

A team led by Emma Lavaut from the French Academy of Sciences has now found another example in which animals are crucial for the reproduction of marine plants: “In experiments with the red alga Gracilaria gracilis and the sea crabs Idotea balthica, we have shown that biotic interactions drastically increase the reproductive success of the algae,” the researchers report. The red alga, which resembles spaghetti, is found in all warm seas and plays an important role in Asia as a foodstuff and as a source of agar. Similar to pollen in flowering plants, the germ cells of Gracilaria gracilis cannot move of their own accord. So far, it has been assumed that they are spread passively via water currents.

To find out to what extent the small crustaceans that typically live on the algae also play a role, Lavaut and her colleagues placed male and female algae plants 15 centimeters apart in an aquarium – one with and one without Idoteen. The result: “In the presence of Idotea balthica, the fertilization success was about 20 times higher,” according to the researchers. Fertilization also worked in other experiments, in which they placed Idoteen, which had previously been attached to a male alga, into an aquarium containing only a female alga. Under the microscope, Lavaut and her colleagues demonstrated that sperm from the red algae were actually stuck to the body of the idoteen, attached with a sticky mucus.

The researchers suspect that the relationship between red algae and sea crab has advantages for both parties involved: the Idotea crabs can hide from predators in the algae and also feed on tiny diatoms that settle on the surface of the red algae. The red algae, in turn, benefit from the “pollination” by the crustaceans and can probably grow better because the idoteen free them from the diatom deposits.

“The study by Lavaut and colleagues extends the concept of pollination from terrestrial plants to algae and possibly traces it back to the earliest evolution of marine invertebrates,” write Jeff Ollerton and Zong-Xin Ren of the Chinese Academy of Sciences, who are not affiliated with the Chinese Academy of Sciences study, in a comment also published in the journal Science.