A quantum computer built from gigantic atoms, controlled by laser light, could be enough to mimic some functions of the brain, such as memory and decision-making.

physicist Rodrigo Araiza Bravoc from Harvard University and his colleagues have demonstrated with computer simulations that a new type of quantum computer can be built from rubidium Rydberg atoms. Such atoms have a large diameter because some of their electrons orbit the nucleus at great distances. They are very sensitive to light, so they can be precisely controlled with lasers. 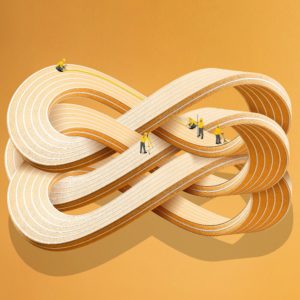 ALSO READ
Infinity has puzzled mathematicians for ages – but have we finally figured it out?

The researchers found in the simulations that lasers could make six Rydberg atoms work as a neural network, an artificially intelligent algorithm that mimics neurons and connections in the brain. In this theoretical quantum computer, the quantum states of the outermost electron in a Rydberg atom correspond to the states of a neuron in the brain, for example whether the neuron is firing or inactive.

The team showed that the quantum computer would be able to exhibit basic decision making and memory. To make decisions, the team exposed atoms in the simulation to two different laser pulses, and trained the neural network to choose which pulse was strongest. This is inspired by a task where trained monkeys observe a pattern of dots moving in two different directions, and then indicate which direction includes more dots.

For memory, the researchers repeated the decision task, but with a delay of one-tenth of a microsecond between the two lasers. This meant that in order to choose between the two, the simulated quantum computer had to learn to remember the first pulse until it saw the second.

Bravo wants to explore the benefits of combining machine learning with small quantum computers. It is realistic to consider creating a neural network with a few Rydberg atoms, he says, because now available quantum computers are also small.

In quantum systems like these, neural networks are more complex than in classical computers, so they may be able to accomplish more complicated tasks in less time or on a smaller scale, says Roberta Zambrinic from the University of the Balearic Islands in Spain.

“The brain is the best system we see around us in terms of processing capacity and energy consumption,” Zambrini says. “If you try to mimic functions of the brain with artificial systems, you may be able to perform better than with other approaches.”

Bravo’s team is now working on actually building the simulated quantum computer, and on versions with more atoms.

Will there be commercial flights without human pilots?

Many planes have automatic pilots, but...
Read more
Physics & Chemistry

Base math problems on social issues

By looking at paradoxes in this way, you start thinking more clearly

Do we need nuclear energy to cope with climate change?

Mysterious neutrino deficiency is not due to sterile neutrino