I will speak for Apple enthusiast opinion when I say that I was really looking forward to the AirPower, Apple’s first wireless charger. As Apple often does, the AirPower was not simply a regular wireless charger with an Apple logo. It had to do something special, charge your iPhone with no issues and precise placement and more. But the project turned out to be a bit too progressive, because the AirPower never materialized. That does not mean that Apple has been idle, because we now have a new wireless charger from Apple. The MagSafe Charger is specially made for the iPhone 12 series and its main twist is the magnetic attachment. Is the MagSafe Charger a must-have? Or is it better to ignore the new charger? In this review of the MagSafe Charger we provide the answer.

These are the main features of the MagSafe Charger:

For this MagSafe Charger review we tested the regular charger. Apple also comes with the MagSafe Duo Charger, a combination between the MagSafe charger and an Apple Watch dock. This model is expected to be available later this year for an as yet unknown price.

Charging with the MagSafe Charger

In the packaging of the MagSafe Charger we don’t find much more than just the charger itself. Apple has put some safety booklets in the box, but nothing more. This means that you must provide a suitable charger yourself. Apple recommends the 20W USB-C charger, which is such a € 25 cost. Other chargers are also suitable, as long as they have a USB-C input. The MagSafe Charger has a usc-c cable, which you cannot replace with another one. To use the full power of the MagSafe charger, the 20W charger is required. Do you have an 18W charger at home? Our charging test for the iPhone 12 shows that the charging with this charger is slightly slower, but in practice we do not think that makes much difference. 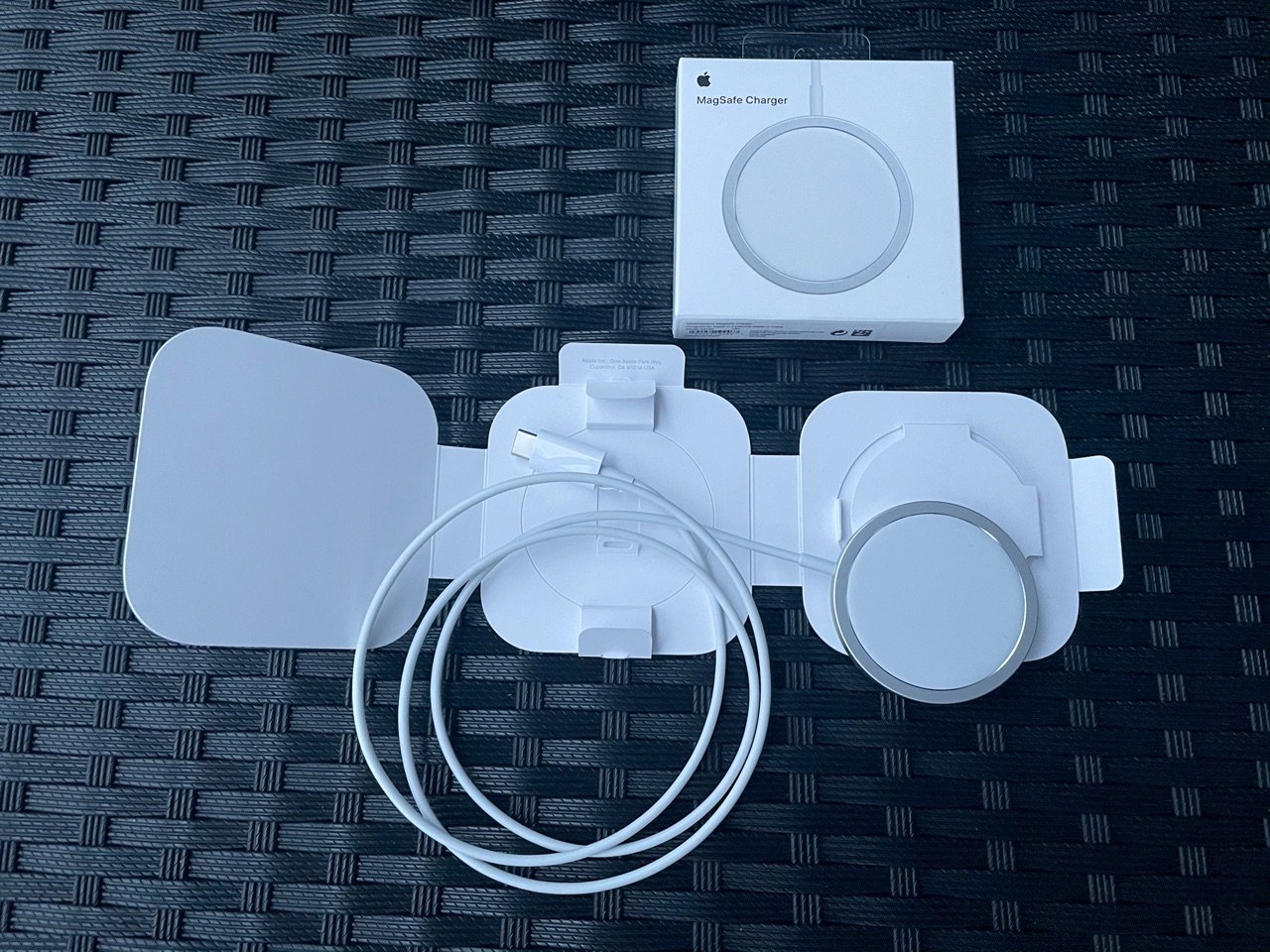 The big advantage of the MagSafe Charger is that the charger, as the name suggests, stays magnetically attached to the back of your iPhone. We have used various wireless chargers from different brands in recent years. With charging mats on which you place the iPhone, it often happens that the iPhone is not placed on it properly, so that it does not charge properly or not at all. That is why such chargers often have an indicator light. This is not necessary with the MagSafe Charger.

The MagSafe Charger also works through cases, but to take advantage of the magnetic attachment you need a special case that works with it. All Apple cases work with MagSafe, such as the silicone case for iPhone 12 (€ 55) or the clear case for iPhone 12 (€ 55). Some other iPhone 12 cases also have MagSafe built in, such as those from Otterbox. The charger stays on these covers just as well as without a cover. If you use another case, it is a matter of trying to see if MagSafe works on it. It is a shame that you basically need a special case for it, because the range is still limited.

There are reports that the charger eventually leaves a circle on the silicone case from Apple, but we have not yet noticed this in our test. We think it’s something to take into account. In any case, Apple warns itself with the leather case that the MagSafe can indeed leave circles. If you do not want that, it is best to choose to use the MagSafe without a case or to buy another wireless charger.

With regular wireless chargers you have the advantage that you can easily remove your iPhone from the charger with one hand. This is not so easy with the MagSafe charger, because it is not heavy enough to remain lying down. You can hold the cable with your finger, so that the charger still falls off. You can of course also glue the bottom to your bedside table yourself.

Speaking of bedside table: an advantage of the MagSafe charger is that you can charge wirelessly while using your iPhone. This can be useful if you are in bed and want to play a game, while your iPhone is almost empty at the end of the day. It doesn’t matter which way you let the MagSafe cable go, as long as it’s in the center of the iPhone. 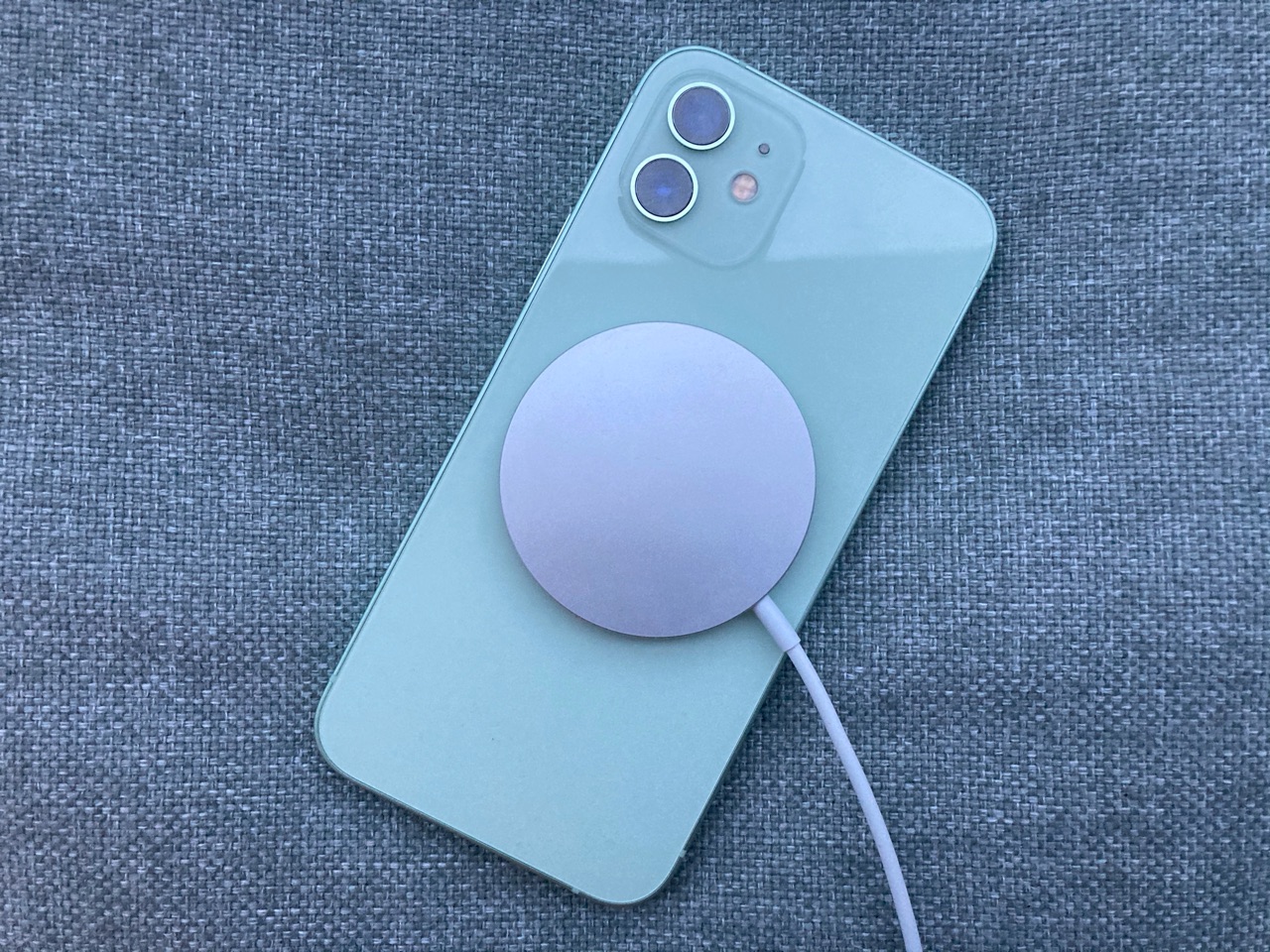 Because the MagSafe charger is so small, you can also use it more easily. If you are a hobbyist and like to craft your own bedside table, you could easily use the MagSafe Charger in it. The small size makes this easier than with the average wireless charger. Another useful application is in the car, where you can easily hide the charger.

We have tested the MagSafe Charger with various plugs. The performance is best with the 20W charger. We also tested the charging speed compared to a Belkin Boost Up 3-in-1 charging dock. This charging station supports up to 7.5W. In half an hour a completely empty iPhone charges to 23%, while with the MagSafe in combination with a 20W Apple charger this is 26%. That is therefore a bit faster, namely almost 13%. If you always charge your iPhone overnight, it’s not so bad that a regular wireless charger slows down a bit. If you want to recharge quickly, the MagSafe charger is a solution. You can read more tests in our article with the iPhone 12 charging test.

Also works with other devices with wireless charging

The MagSafe Charger can also be used with older iPhones that are suitable for wireless charging. But because these do not attach magnetically to the charger, in combination with other devices you actually hardly benefit from the MagSafe charger. Apple promises that other accessories will charge at a speed of 7.5W (just like regular wireless chargers), but from one test turns out that this is a lot slower with the MagSafe. We have also noticed that charging an older iPhone with the MagSafe is not worth it. In addition, placing your iPhone is rather inconvenient, because the charger is smaller than the iPhone itself. In combination with the AirPods, we find it useful, because that battery is very small. The MagSafe charger is about the same size as an AirPods charging case, so it’s easy to put your AirPods on it. 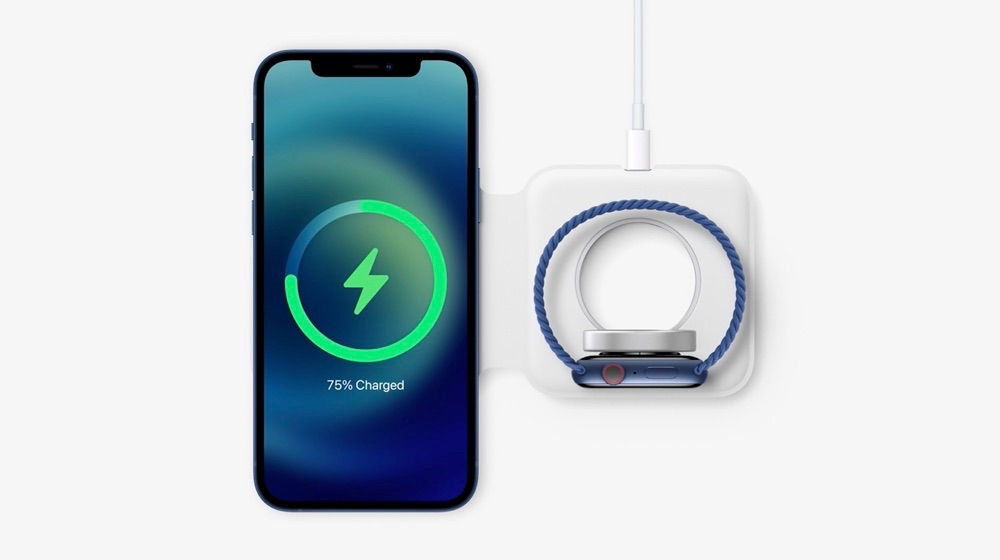 As we said, the MagSafe charger is very compact. It consists of an aluminum housing with a kind of soft silicone surface. You attach this softer part to the back of your iPhone, so that it does not scratch the glass back. The charger is about twice the width of a regular Apple Watch charger.

We think the charger looks nice and sleek. It has a very simplistic look, just what you are used to from Apple. We also like that there is no light or the like on it, because this can be quite disturbing, especially at night. Instead, you will see an animation on your iPhone as soon as you put it on the charger, but only when it is locked. This is comparable to the Apple Watch: a green (or red) ring showing the current charge percentage. Unfortunately, you will not see this ring while charging, because it only appears when you put the iPhone on it.

A disadvantage of the design is that the cable is attached to it. With a length of 1 meter, this is a bit on the short side in our opinion. Especially if you want to use your iPhone while it is charging via MagSafe, the one-meter cable limits your freedom of movement. That is a missed opportunity, especially because we also think that freedom of movement is an advantage.

What is also interesting to report is that MagSafe also opens the doors to an iPhone without a Lightning (or USB-C) port. At the moment the MagSafe is only for passing on power, but we wouldn’t be surprised if Apple has more plans in the future with, for example, passing on data via a later version of the MagSafe.

We think the MagSafe Charger for the iPhone 12 is a typical Apple product: it is wireless charging, but slightly different. The magnetic mounting solves at least one obvious problem of ordinary wireless chargers, namely the correct positioning of your device. The magnetic attachment makes it easy to place your iPhone on the charger and you always know that it is charging properly. Due to its small size, you can easily put it away and take it with you, for example when traveling. And with the right plug, your iPhone also charges even faster than with a regular wireless charger. We also find the freedom of movement an advantage, although the short cable limits this somewhat.

The short cable isn’t the only drawback. Although the price of the charger itself is quite reasonable, it is a shame that you still have to have a separate plug. Plus, for best results, you’re almost obligated to buy Apple’s 20W charger. If you have just bought a new iPad 2020 or iPad Air 2020, then you immediately have the right charger at home. Another drawback is that the charger does not work with all cases and that it may leave circles in combination with the leather case. Don’t have an iPhone 12, but are still considering getting this MagSafe charger? Then we actually advise against this, because you have little or no benefit from this charger in combination with older devices. It is therefore a pity that the Apple Watch is not supported.

All in all, with the MagSafe charger, Apple has developed a distinctive way of wireless charging. We are curious about what else Apple is planning with MagSafe in the coming years. In the near future we can at least expect the MagSafe Duo Charger, which if we are honest we find it a bit more interesting.

Do you want to buy the charger after reading this MagSafe Charger review? The charger is currently on sale from Apple for € 45. The corresponding silicone covers cost € 55 per Unit. The recommended 20W USB-C power adapter costs € 25.

You can now order the iPhone 12 and iPhone 12 Pro from the following providers:
T-Mobile | Tele2 | Mobiel.nl | KPN | Vodafone | Belsimpel.nl

The talks between the municipality of Amsterdam and Parking Alarm did not help, today they were brought to court. Parking in 2021 has become a...
Read more

All new Qashqai on the market next year ...
Read more

All fast Renault 5s in a row!

Especially for this beautiful Monday evening we take a closer look at all fast Renault 5s! It was the biggest news last week. Renault...
Read more

Tesla does not have to fear BMW in 2021 either

BMW has big plans and nice words, but in practice does not yet know how to keep up with 'underdog' Tesla. When it comes to...
Read more

Can you reuse FFP2 masks? What you need to know

Photo: Pixabay / CC0 / lifetesterdotnet As of today, FFP2 masks are mandatory in Bavaria. Here you can find out how to reuse the...
Read more

The new Zens Modular Series is a series...
Read more
Other Gadgets