The range of wireless chargers has become very large in recent years. This also makes it more difficult for manufacturers to distinguish themselves. Nevertheless, the Dutch Zens has succeeded in making something new: a modular charger. The Zens Modular Series consists of a series of chargers and docks, which you can connect magnetically. This means that you largely determine what your charging dock for your iPhone, AirPods and Apple Watch looks like. But how convenient is that? Is the Zens Modular Series worth the effort and investment? You can read about our test in this review of the Zens Modular.

These are the main features of the Zens Modular Series:

For this review we tested three parts: the standing wireless charger (base station), the single wireless extension and the USB extension. For the USB version, we also used the Apple Watch USB stick, which you can easily plug into the USB port. This is also suitable for the Zens Liberty. There is also a ready-made Apple Watch extension, but unfortunately we were unable to test it.

With the Zens Modular Series, you can create your own all-in-one charging dock for your Apple devices. You can therefore charge up to ten devices at the same time (depending on your setup), all with one cable. There are of course all kinds of ready-made charging docks, but we have often experienced that the layout is not exactly as you would like. With the Zens Modular Series you do not suffer from that, which is also the biggest advantage.

Each set starts with the base station, where you also plug the supplied power cable. This is a special round connection, so unfortunately you cannot use an existing cable with USB-C, for example. The cable is also attached to the power block itself, so you cannot replace it. The cable is 1.5 meters long enough to place the charger on your desk or bedside table. 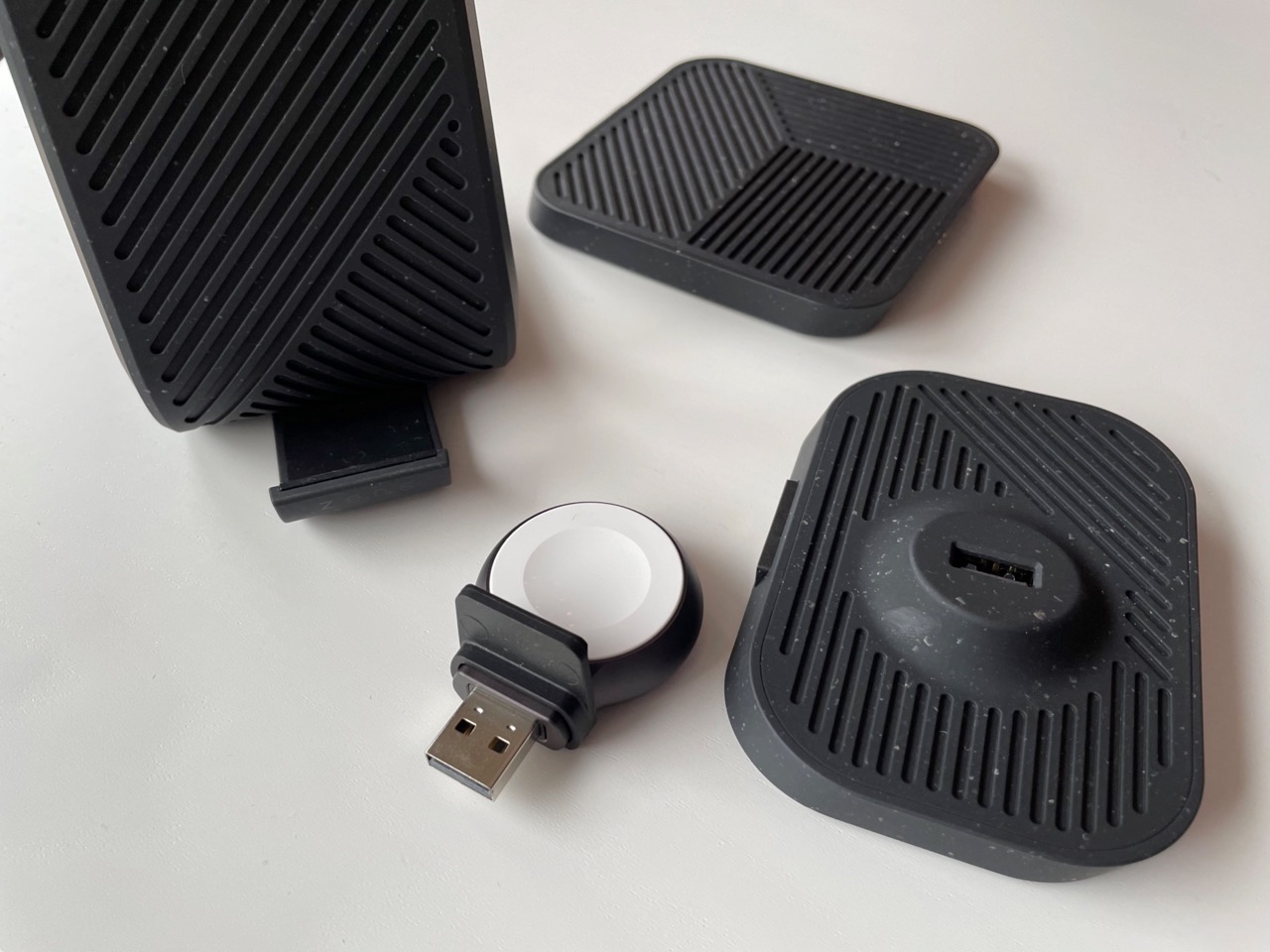 In the case of the upright version, the base station is always on the left, after which you have the freedom to choose which extensions to attach on the right. This is done with magnets, so it is very easy to connect everything. We find it easiest to place the single wireless charger next to the standing iPhone charger, with the USB extension with Apple Watch puck next to it. The single wireless charger is ideal for an extra iPhone or AirPods. You can connect up to four extensions. That is more than enough in our opinion.

Because the charger is modular, you can easily detach the base station if you go away for a weekend, for example. You do not have to bring the complete set, because you only take what you need.

The biggest advantage is that you have a lot more freedom. Setting up the wireless chargers and adjusting the setup to your preferences is a piece of cake. Yet there are also disadvantages, so that it is not as modular as you might want. This way you can use a maximum of one base station. So you cannot use two upright chargers. Moreover, in the case of the upright version, the base station is always on the left, with a connection for the other parts only on the right. We would have preferred the upright version to have an extension socket on both the left and right. For example, if you now have a nightstand to the right of your bed, your iPhone is the furthest away from you. The other two base stations have a connection on both sides. 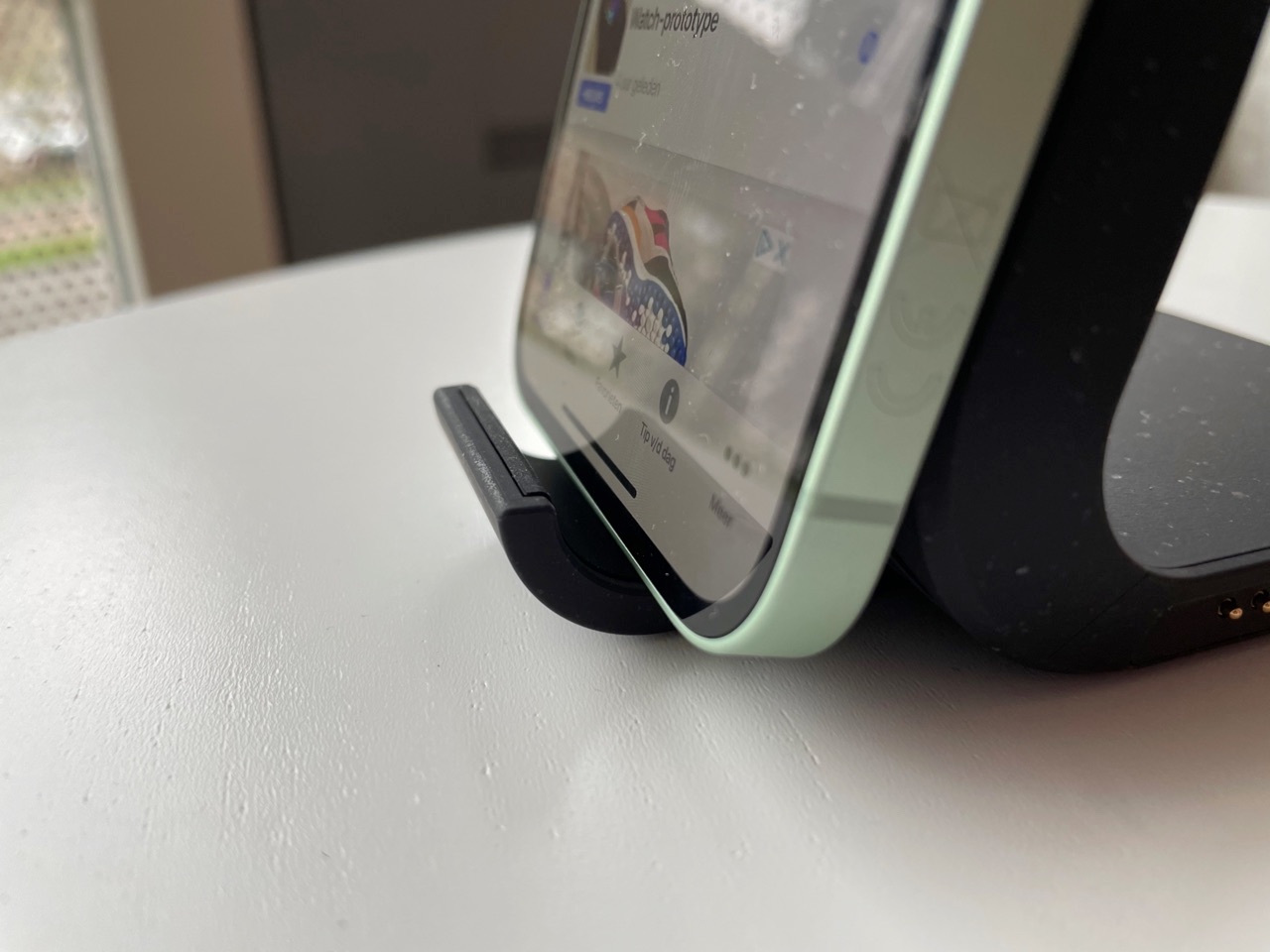 Another big disadvantage of the standing charger is that the holder on which your iPhone rests gets in the way. It is therefore almost impossible to unlock your iPhone while it is charging, as you can barely get to the bottom of the screen. The use of Touch ID on an iPhone with a home button is also very difficult due to the front holder. It is a mystery to us why this front piece sticks out so far up, because the iPhone does not rest on it at all. If you place the charger next to your bed, you will not be bothered by this. But if you want to put it on your desk and use your iPhone at the same time, that is extremely inconvenient.

The USB extension can therefore be used for your Apple Watch in combination with the separately available Apple Watch puck, but you can also use it for an iPad, extra iPhone or AirPods, for example. At the back is also a USB-C connection for an extra device. With the USB extension you can therefore immediately charge two additional devices, which makes this a very practical extension. 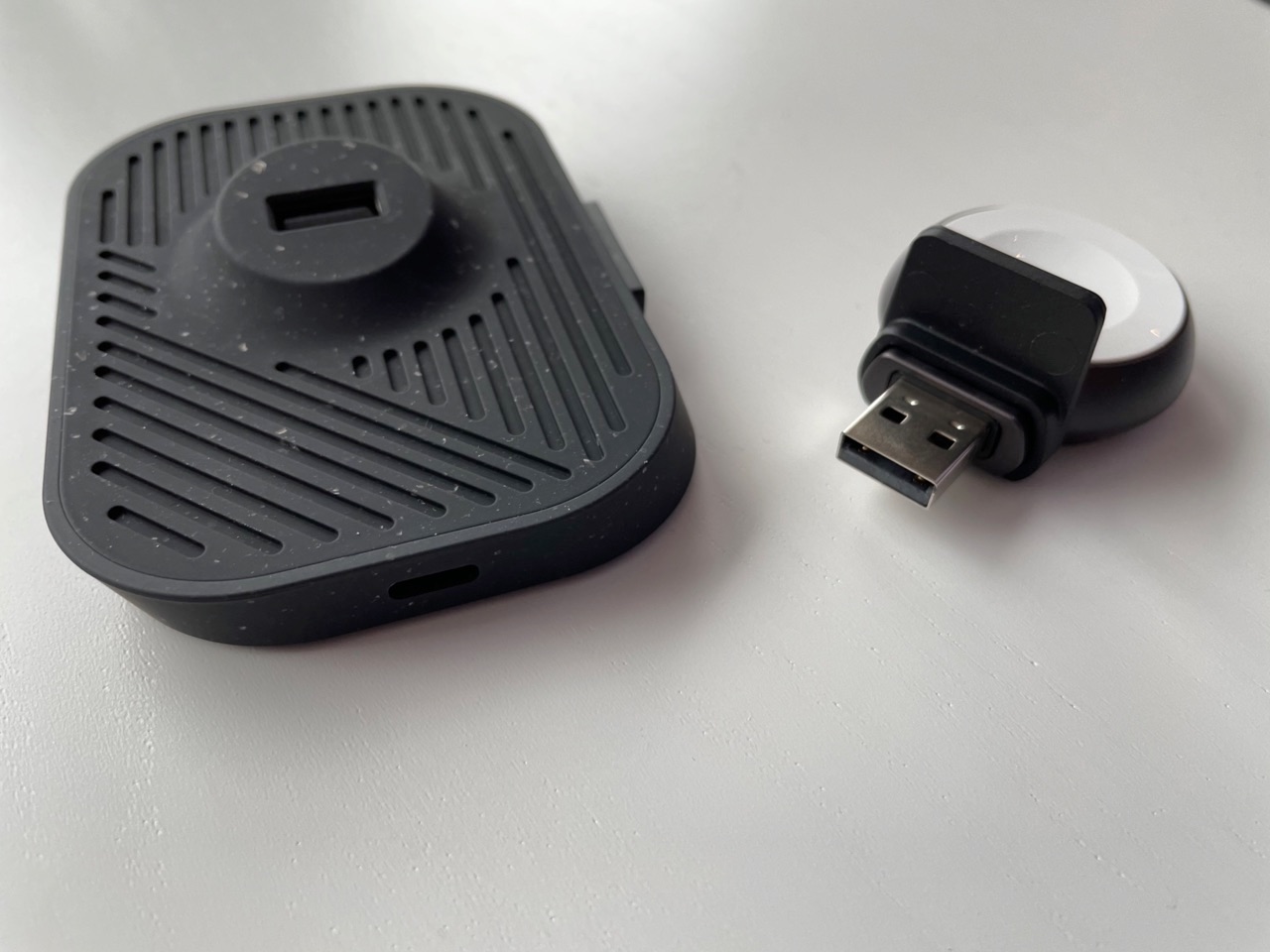 In terms of performance, the Zens Modular Series is not inferior to other wireless chargers and charging docks. The standing charger supports an output of up to 15W, while the single wireless charger gives 10W of power. Since Apple devices can charge wirelessly with up to 7.5W, this is more than fast enough. Keep in mind that the speed can decrease if you connect multiple extensions and charge the maximum number of devices at the same time.

The USB extension has a power of 10W at the USB-A connection and a maximum of 18W for the USB-C output. That is also enough to charge your iPhone, iPad or Apple Watch, although you do not use fast charging because of the lack of Power Delivery.

What’s good to know is that only the base station and the single wireless charger have a status light. This is located at the back, so you hardly have any problems in the bedroom, for example. 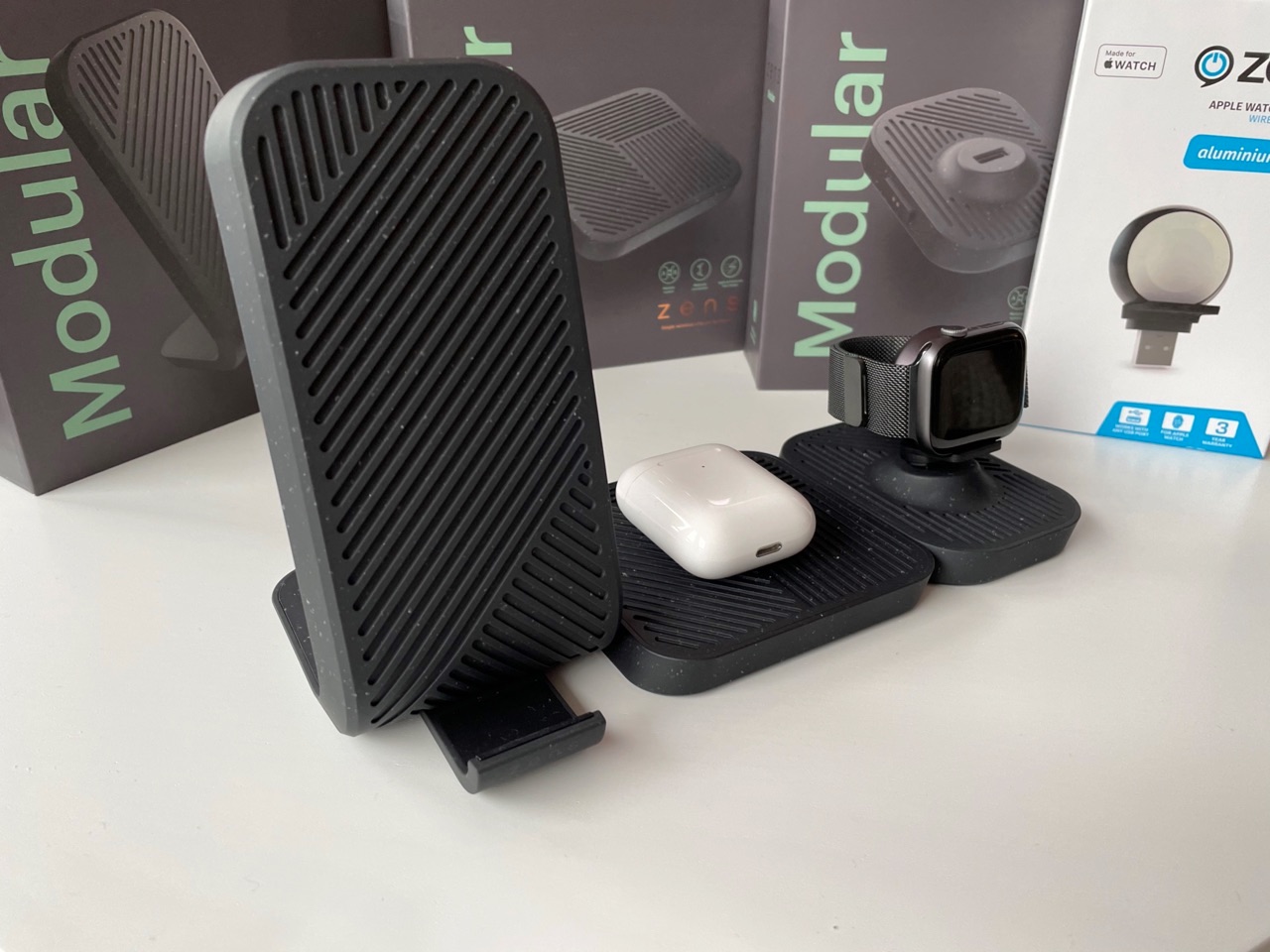 In terms of design, we are not very satisfied with the Zens Modular Series. All parts are made from recycled material. In terms of color, everything tends to dark gray, but it contains white dots, which makes everything look dirty quickly. As soon as you take the charger out of the box, it immediately looks like there is all dust on the charger. We would have liked it a lot better if everything was plain black or dark gray. Because of the choice of the white spots, everything quickly looks dirty. You quickly tend to wipe it clean until you realize that all those specks are in the material itself. 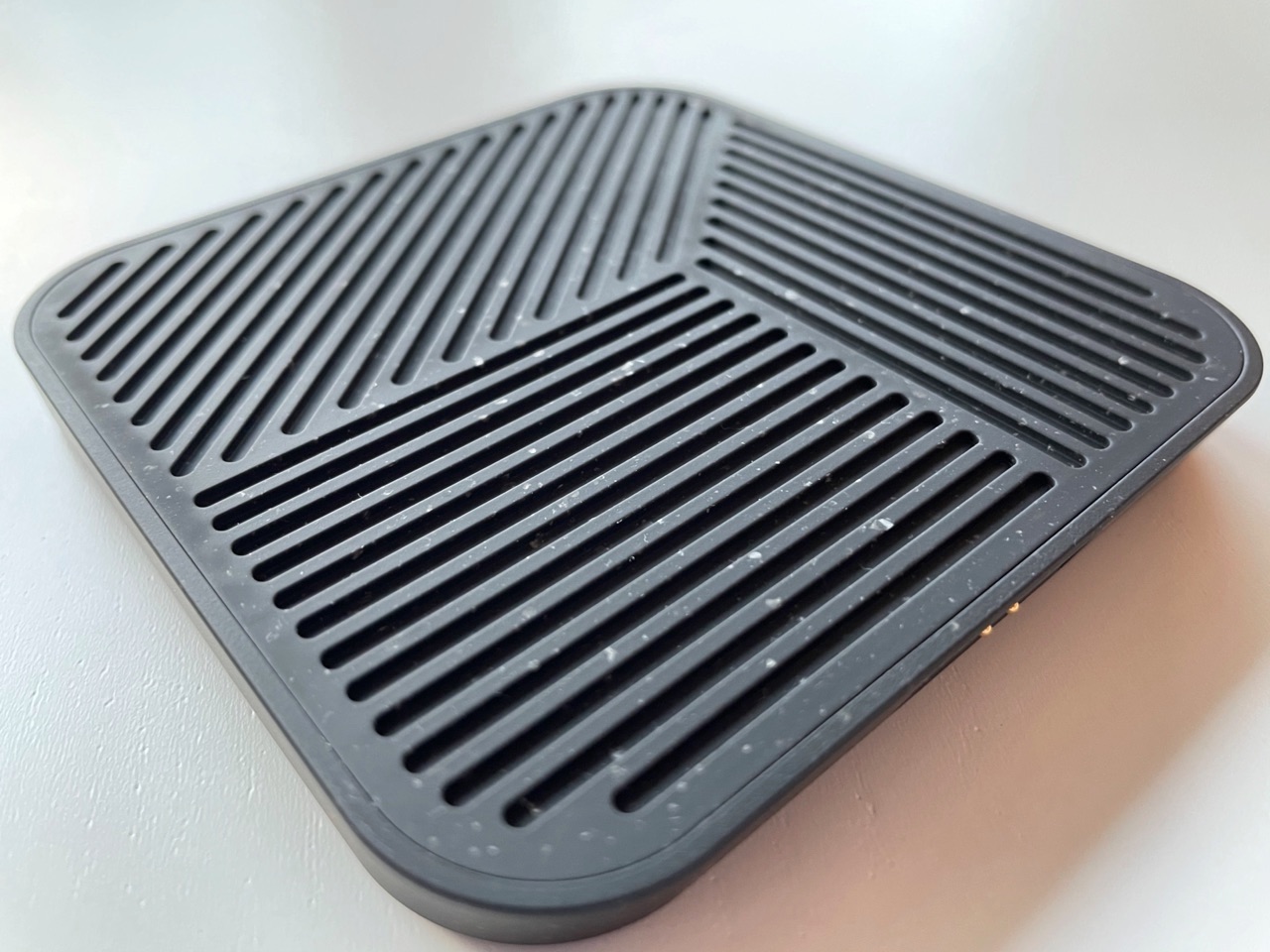 All chargers are made of plastic, with rubber feet at the bottom. We think it is a shame that Zens has not processed the rubber a bit more on the chargers themselves. An iPhone can now slide off a charger just too easily. There is a bit of grip on it, but in our opinion the material could have been more rubbery. For example, the foot of the standing charger on which the bottom of your iPhone rests is provided with a rubber layer. We would have liked to see this in more places on the chargers.

We are also not a big fan of the stripe pattern. The relief also makes it much easier for dust and other dirt to get stuck between the cracks, making cleaning less easy. You only have to wipe a charger with a flat surface with a cloth or duster, but the structure of the Zens Modular Series makes that not so easy.

The strength of the Zens Modular Series lies in the versatility of the chargers. You largely determine in which order you place the separate parts, so that you can almost create the perfect charging dock in terms of setup. Nevertheless, we think it is a pity that not all components are equally modular. The standing charger can only be placed on the left. Moreover, an entire set is limited to one base station and we think that’s a shame. We also do not understand a few design choices of mainly the standing charger, such as the raised edge so that you can hardly use your iPhone. We are also not a fan of the design of the chargers.

If you haven’t yet found your favorite charging dock for your Apple devices, the Zens Modular Series is worth considering. You can make it as expensive as you want and you only buy the parts you really need. The freedom to place the parts in your own desired order is without a doubt the biggest plus, although we had hoped for more freedom.

Do you want to buy the wireless chargers after reading this review of the Zens Modular Series? You can (soon) go to Coolblue and Amazon, among others.

Guess the cause of this accident, we do establish a relationship with the bottle in the driver's mouth. Also interesting! Video: Car loses cow Video - this...
Read more

Will Bisimoto build the thickest EV of 2021?

By the way, read the question as 'is it the thickest?', Because that Bisimoto will build this 935 EV seems to be confirmed. In 2019...
Read more

Swing out the old Fiat 500 with Pogea Racing Hercules

Who knows, the existence of the thickest Fiat 500 may come to an end: the Pogea Racing Hercules based on the Abarth 595 is...
Read more

Back to Basics: BMW iX3

The BMW iX3 is the second fully electric model from Munich after the i3. Unlike the other BMW i models, the design of...
Read more

If you work on your laptop (at home) for a long time, a separate screen and a...
Read more
Other Gadgets

Teufel Supreme On – Best of both worlds

The Teufel Supreme On is a pair of headphones that you can connect to both Bluetooth and...
Read more