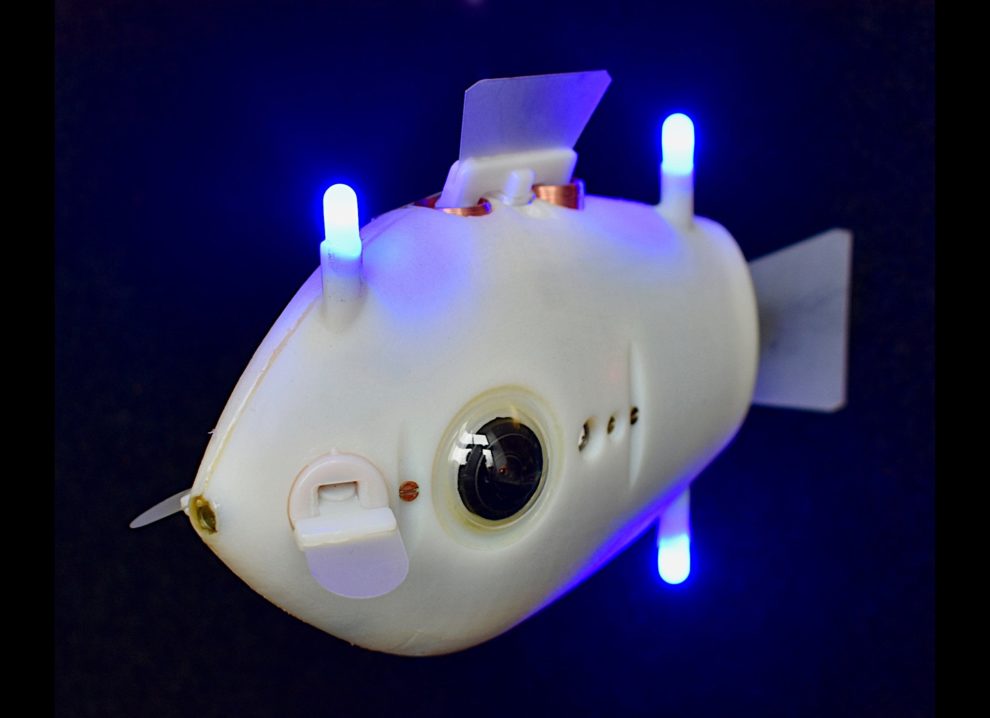 They are ingeniously oriented towards their neighbors: Researchers have developed underwater robots that can imitate the complex swarming behavior of fish. The “Bluebots” automatically synchronize movements without having to be controlled from outside. The concept could lead to the development of units made up of underwater robots that explore sensitive ecosystems in a gentle and flexible manner. As a model system, the fish robots could also be used to research swarm intelligence in animals, say the researchers.

From small groups to gigantic swarms and herds: In many animal species, the individuals form associations and develop an amazing collective behavior in the process: The groups show complex, synchronized reactions that help them find food, move around together, or attack predators escape. The schools of fish that move three-dimensionally in the water are the most impressive examples. The special thing about it is that not a single animal or a special group takes the lead and there is also no targeted communication. The sometimes astonishingly complex collective behavior, on the other hand, arises from so-called implicit coordination. The individual fish make their decisions based on what they see in their neighbors.

Refined units with sensors and “brains”

Subtle responses from individuals can lead to responses from the community that serve an important purpose for the common good. The corresponding behavioral phenomena are also referred to as swarm intelligence. This type of decentralized, autonomous self-organization and coordination has fascinated scientists for a long time, especially in the field of robotics. There have already been successful attempts to simulate swarm or group behavior using robots. However, these were units that moved on surfaces in a two-dimensional environment. The concept of the researchers led by Florian Berlinger from Harvard University is now conquering the three-dimensional space of water – it simulates the swarming behavior of fish.

When developing the units known as “bluebots”, which can form a swimming swarm of robots, the scientists based themselves on natural models: the robots have fins and drive systems that enable them to move in three dimensions in the water. The highlight of the system, however, is the sensor technology and the artificial “mind” of the Bluebots: The researchers developed a visual coordination system based on blue LED lamps. Each underwater robot is equipped with two cameras and three lights. The artificial “eyes” with fish lenses recognize the LEDs of the neighboring bluebots and then use a special algorithm to determine their distance, direction and course.

The researchers were able to show through experiments in water basins that the swarm can display complex self-organized behaviors through certain behavioral instructions, including clustering, loosening up the group and forming circles. “Every Bluebot reacts implicitly to the positions of its neighbors,” says Berlinger. “So if we want the robots to join forces, then each Bluebot calculates the position of each of its neighbors and moves towards the center. If the robots are desired to disperse, the bluebots can show the opposite reaction. And if we want them to swim as a swarm in a circle, they can be programmed to follow the lights directly in front of them in a clockwise direction, ”explains the scientist.

By programming interaction rules, the researchers also simulated a simple search mission with a red light in the test pool. With the help of the dispersion algorithm, the bluebots first swarmed out until someone came close enough to the light source to recognize it. After the find, the LEDs of this fish robot then started to flash, which triggered the aggregation algorithm in the rest of the school. Then all the Bluebots gathered around the signaling robot and the light to be found. “Our results with Blueswarm thus represent an important milestone in the research of self-organized collective behavior underwater,” sums up co-author Nagpal from Harvard University.

The researchers see the potential of the concept particularly in exploratory missions: “The findings from this research can help develop miniature underwater swarms that can carry out environmental monitoring and exploration in visually complex and sensitive environments such as coral reefs.” Berlinger adds: “Autonomous robot swarms can also be helpful in areas that are inaccessible or dangerous – in which human intervention may not be possible and where GPS and WiFi are not available,” says Berlinger. In addition, the concept also has potential for biological research, the scientists emphasize: The approach also paves a way to better understand schools of fish by artificially reproducing their behavior, ”says Nagpal.

After some grainy pictures, it is time for Volkswagens official announcement of the Golf GTI Clubsport 45. It is now a five-year tradition of Volkswagen....
Read more

New on Netflix: best films and series of March

https://www.youtube.com/watch?v=pF_5wrwRuUw What stresses are tunnel shells exposed to? German researchers are investigating this as part of the extension of underground line 5 in Frankfurt...
Read more
Computer & Phone

Clubhouse: what is it and how does it work?

Clubhouse is the latest trend in app land. And perhaps because as a user you do...
Read more
Computer & Phone

With green pips to the red planet

In June we can expect Apple's Worldwide Developers Conference again, the annual conference for software developers that...
Read more