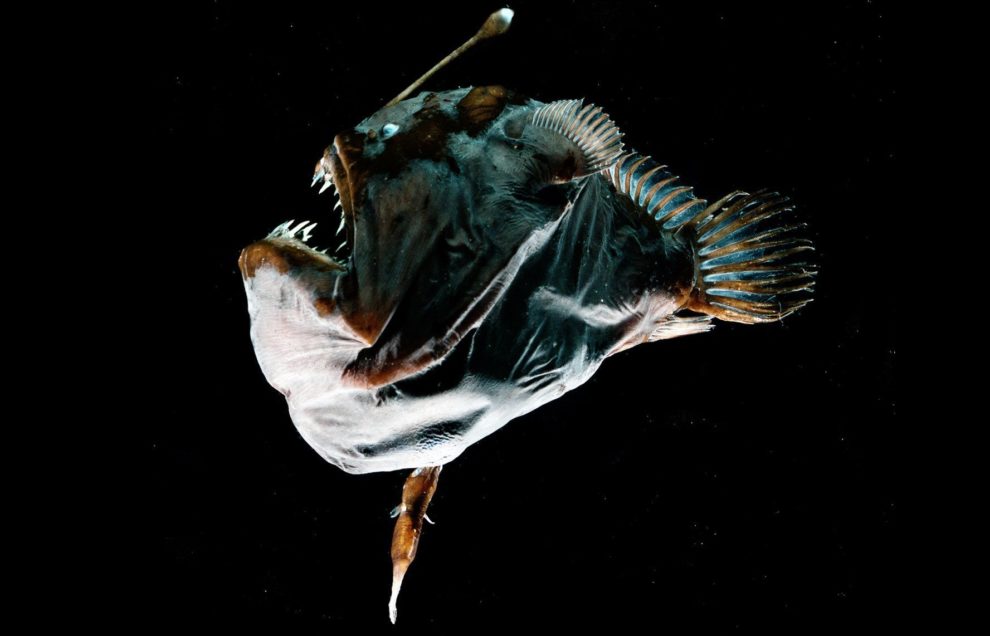 Their reproductive system is as bizarre as their appearance: in deep-sea frogfish, the males grow firmly on the females and a common bloodstream is created. Researchers have now clarified why this so-called sexual parasitism does not lead to rejection reactions like transplants. The frogfish have switched off certain immune functions without losing their resilience. The scientists say that more detailed studies of this ability could therefore be of interest to medicine.

They live in darkness and lure prey into their huge mouths with a shining angel. This bizarre combination of features of the frogfish, also called anglerfish, is surpassed by their reproductive strategy. Since partners rarely meet in the vastness of their deep-sea habitat, the males establish a literally binding contact with the females: after docking, the tiny things grow to their much larger ladies. The partners’ tissues connect and a common blood circulation is created, which supplies the stunted male with nutrients. This is why this reproductive strategy is also called sexual parasitism.

Why no tissue rejection?

From a biological and medical point of view, this connection is extremely astonishing. Defense reactions are usually to be expected in the event of close contact between genetically different tissues. The vertebrate immune system normally reacts to foreign cell structures as well as to pathogens. For this reason, defense reactions in organ transplants are suppressed by medication and the tissue properties of the donor and recipient must be coordinated as best as possible.

The research team headed by Jeremy Swann from the Max Planck Institute for Immunobiology and Epigenetics in Freiburg has now investigated the question of why individuals can bind together with the monkfish without causing tissue rejection. To do this, they examined the genomes of various anglerfish species. The focus was on hereditary systems that are responsible for the formation of the so-called main histocompatibility antigens (MHC). They sit on the surface of body cells and trigger an alarm in the immune system when pathogens are present. These antigens also play an important role in transplantation medicine: it is important to find similar forms of MHC in donors and recipients in order to ensure the lowest possible rejection reactions after organ transfer.

In their genetic analysis, the researchers now found that the anglerfish switched off the genes used to produce the MHC molecules. It seems like they have simply abolished this aspect of physical defense in favor of their bizarre reproductive system. “Apart from this unusual MHC constellation, we also discovered that the function of killer T cells is also severely limited if not completely lost in their effects. They usually eliminate infected cells or attack foreign tissue during the rejection reaction. These two surprising results show us that the immune system of anglerfish is extremely unusual among the tens of thousands of other vertebrate species, ”says Swann.

The researchers found further evidence that the frogfish’s immune system has amazing features. Some species apparently also do not form antibodies, which besides the killer T cells in our immune system play a crucial role for the so-called acquired immune defense, which can adapt to specific attackers. “For humans, the loss of such important functions of the acquired immune response would lead to a fatal deficiency,” emphasizes co-author Thomas Boehm from the MPI. Obviously, the frogfish can survive without the adaptive immune functions.

The researchers suggest that these vertebrate representatives have amazingly effective innate immune functions to protect themselves from infection. “We assume that previously unknown environmental conditions brought about changes in the immune system that were then used for the evolution of sexual parasitism,” says Boehm. Among the species of angler fish examined, the scientists have also discovered a representative whose immune system and mode of reproduction still seem to represent an intermediate stage. “The unusual system in this group of fish seems to have emerged independently several times in the course of evolution,” says co-author Ted Pietsch from the University of Washington.

As the scientists emphasize, it is now important to decode the frogfish’s immune system even more precisely. In addition to the biological significance, there is also considerable potential for medicine: Perhaps the bizarre fish can provide clues for the development of strategies to improve innate immunity in patients with inherited or acquired immunodeficiency, the researchers write.

Making Mistakes: Here’s How You Learn To Cope With It

Photo: CC0 / Pixabay / Pexels "It is human to make mistakes" - as the saying goes. But it is often difficult to deal...
Read more

Photo: Laura Müller We have four easy yoga exercises for two for you. You can try them out with your partner, with your friend...
Read more

Researchers have discovered a hell ant in an amber that snatched a prey about 99 million years ago. (Image: NJIT, Chinese Academy of...
Read more

Select the best hardware and many large drives and you can click together a NAS worth a...
Read more

In this video you can see the new Ford Bronco do what it was made for: work! Comments Techzle wrote: August 5, 2020 Euromaster tire...
Read more

Researchers have discovered a hell ant in an amber that snatched a prey about 99 million years ago. (Image: NJIT, Chinese Academy of...
Read more
Biology

New Guinea has the greatest diversity of plants in the world

View of forest and mountains in New Guinea. (Image: Zacky Ezedin) Not to be outdone: New Guinea is the island with the greatest diversity...
Read more
Biology

Enjoying ice cream at the expense of tropical forests

Escape through the gut

The water beetle Regimbartia attenuate, the frog Pelophylax nigromaculatus and the exit of the beetle from the friend. (Image: Kobe University) Usually being eaten...
Read more
Biology

Springtails like this are important helpers in the decomposition of organic materials. (Photo: Henrik_L / iStock) Climate change and intensive agriculture not only affect...
Read more