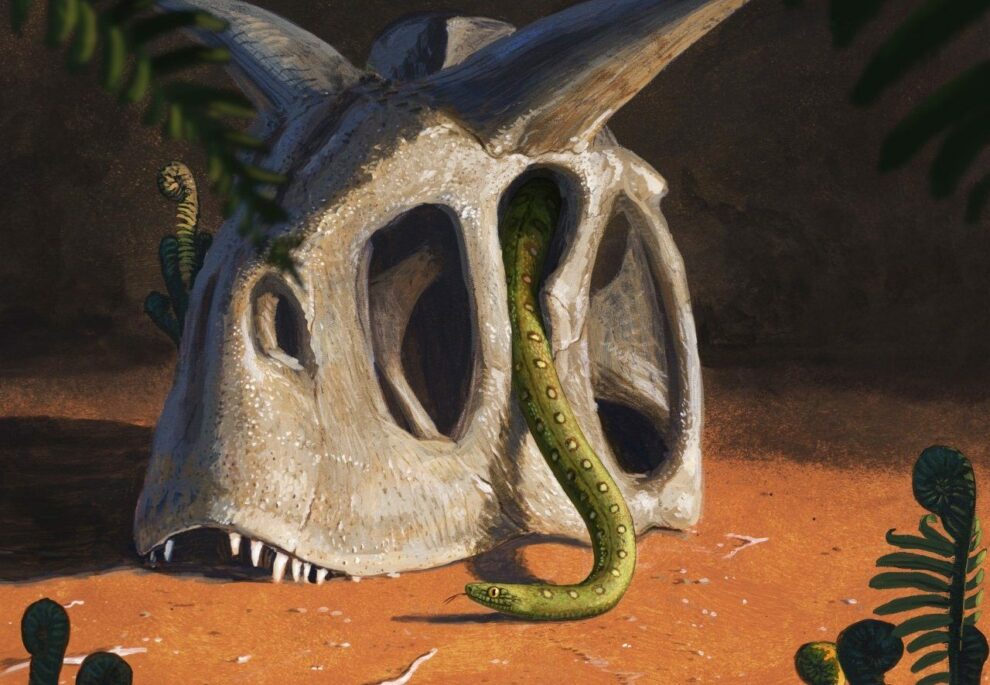 For the snakes, the asteroid impact 66 million years ago was a disaster with evolutionary ignition power, according to a study. The catastrophe that destroyed the dinosaurs, among other things, also hit the Cretaceous snakes – but the few survivors then apparently quickly became the basis of the biodiversity that characterizes these reptiles to this day. After mass extinction eliminated many competitors, the snakes were able to conquer many new ecological niches, the researchers explain.

It was one of the big bang in the history of evolution: about 66 million years ago, in the area of ​​today’s Mexican peninsula Yucatan, a huge asteroid crashed into the earth and plunged the Cretaceous world into a catastrophe. The consequences of the cosmic bomb led to abrupt environmental changes and a collapse of the food chains. The result was one of the worst mass extinctions in Earth’s history: About 76 percent of the Cretaceous animal species were swept off the stage of evolution – the most famous victims were the dinosaurs. Other lines of development also suffered major losses – but some species evidently managed to survive the catastrophe. They then became the ancestors of the representatives of today’s animal groups.

As part of their study, the scientists led by Catherine Klein from the University of Bath have now devoted themselves to the question of how the snakes survived the Cretaceous inferno and how they subsequently developed. Basically, it is known that the roots of the evolutionary history of these legless reptiles lie in the Cretaceous period. Findings suggest that the snakes had already produced various species at the time of the asteroid impact – but the group of reptiles was probably restricted to the southern hemisphere.

On the trail of snake evolution

In order to gain clues about the evolutionary fate of snakes, the scientists combined three sources of information: They evaluated data on the relationships between 115 current snake groups, recorded the geographical distribution of fossil and living snake species and carried out genetic analyzes. The so-called molecular clock method was used: Based on certain characteristics in the genetic material, conclusions can be drawn about when evolutionary splits have occurred.

As the team reports, the data and temporal information indicate that the nearly 4,000 species of snakes today ultimately go back to a handful of species that somehow managed to survive the catastrophic consequences of the asteroid impact 66 million years ago. The researchers suspect that the survivors benefited from the ability to hide in the earth and be able to do without food for a long time.

In addition, the evaluations show that the great mass extinction acted like a liberation for the survivors: The snakes then produced new lines of development comparatively quickly. “It is remarkable that the snakes not only survived the mass extinction that wiped out so many other animals, but that within a few million years they became innovative and used their habitats in new ways,” says Klein. In addition, the results of the study show that after the geological bang, the snakes began to spread across the globe. At first, Asia was apparently the target.

Successfully snaked out of the disaster

As the researchers explain, the post-apocalyptic career was probably made possible by the fact that the surviving snake species were no longer blocked by competitors. This included previously certain dinosaurs, but also the previously established Cretaceous snake species. “Our data suggests that the mass extinction was a creative destruction to the snakes: by wiping out ancient species, survivors could take advantage of the gaps in the ecosystem and experiment with new ways of life and habitats,” says senior author Nick Longrich of the University of Bath. After the mass extinction, the basic lines of development emerged relatively quickly – such as the vipers, cobras, garter snakes and strangler snakes, which were adapted to new habitats and prey animals.

The developmental patterns observed in snakes are thus similar to those that are also known from the evolutionary careers of mammals and birds after the Cretaceous mass extinction. In these animal groups, too, the survivors became the basis for a high degree of diversification. In other geological periods with strong environmental changes and extinction, such patterns also emerge in certain living beings. “This seems to be a general feature of evolution – especially in the periods immediately after major extinction events it is most experimental and innovative,” says Longrich.

Is the woolly mammoth the solution to our climate problem?

A new company plans to bring the woolly mammoth to life and use it to combat some of the most worrying impacts of climate...
Read more
Earth & Climate

New company aims to bring woolly mammoth to life – but can it?

If it's up to the Colossal company, woolly mammoths will soon be stomping the earth again. And if you look at the slick...
Read more
Earth & Climate

Microchips can now fly too

Scientists have created a flying microchip, making it the smallest flying device in the world. The flying microchip is not much bigger than a grain...
Read more
Earth & Climate

It has now been scientifically proven: men are sometimes really superfluous

An international team of researchers shows that some species can survive for a long time even in the complete absence of males. Many species –...
Read more
Earth & Climate

The amount of hydrogen gas in the atmosphere increased from 330 to 550 parts per billion between 1852 and 2003. And researchers can't...
Read more
Earth & Climate

How cold-tolerant was Homo sapiens?