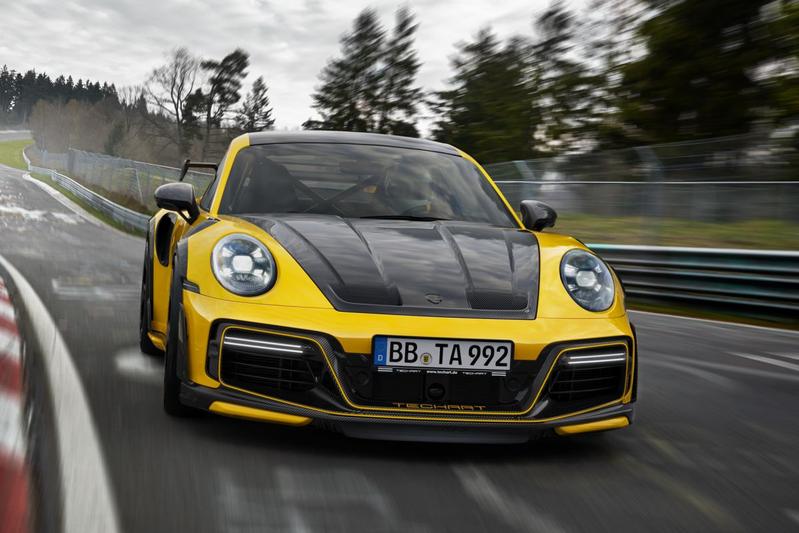 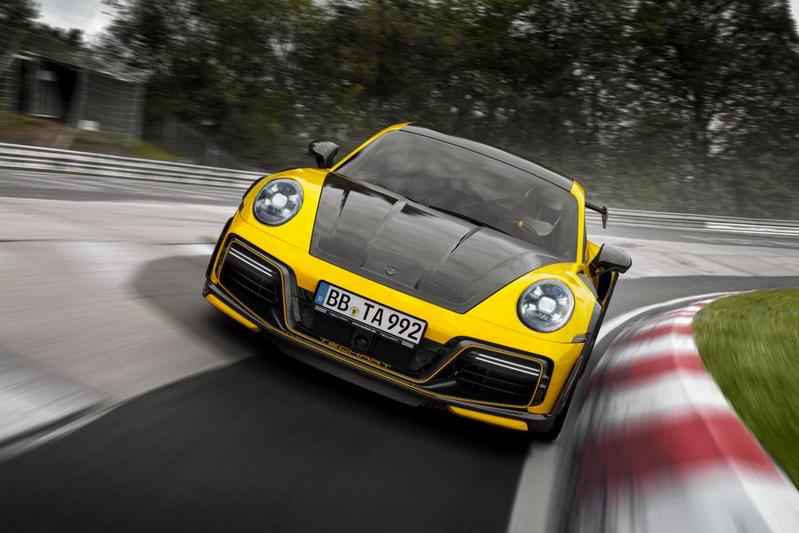 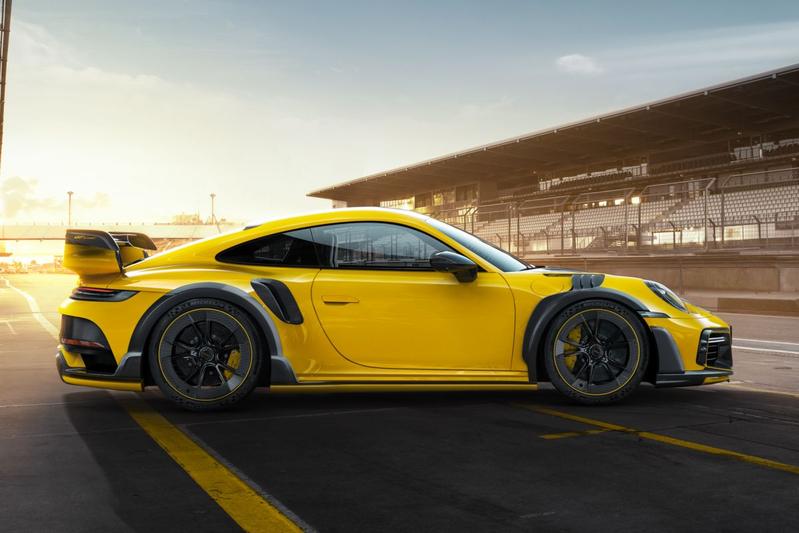 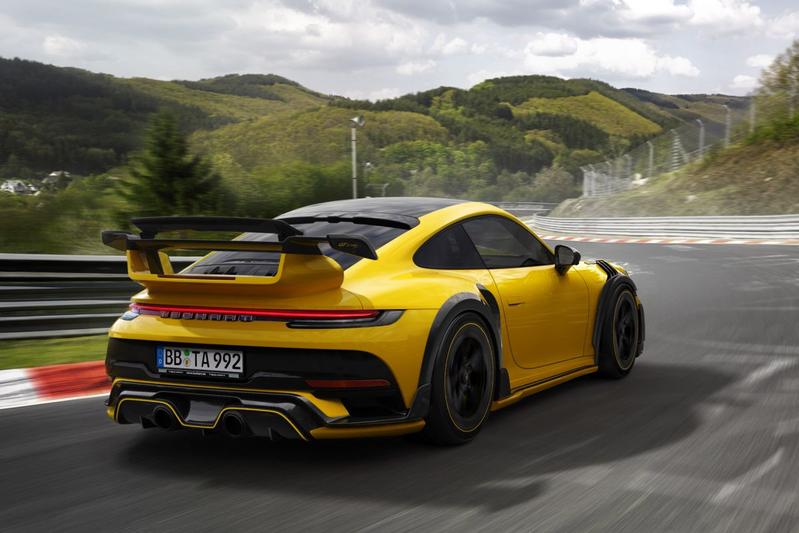 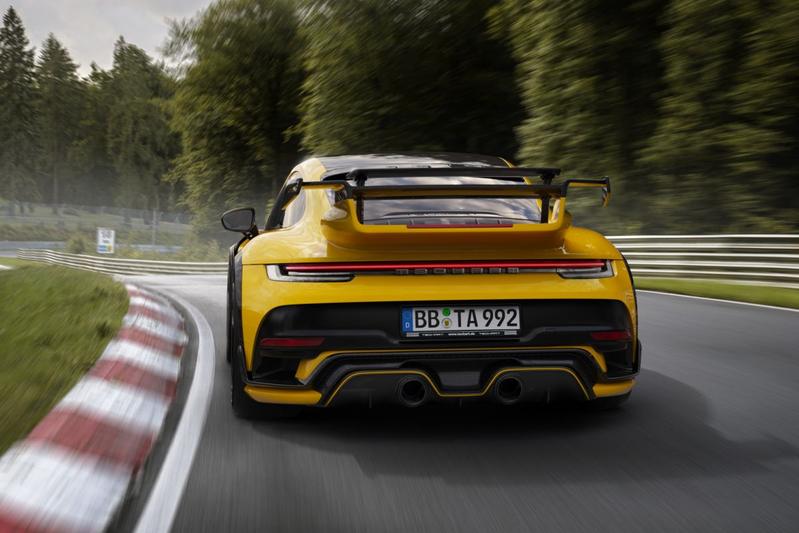 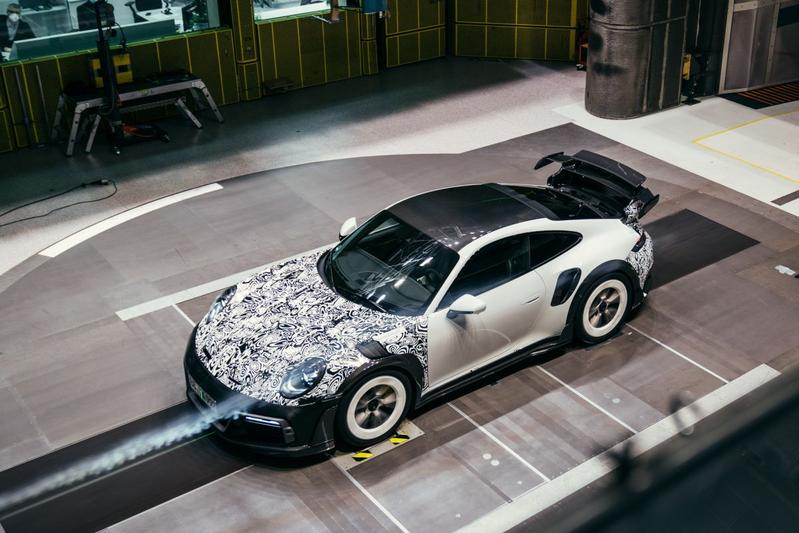 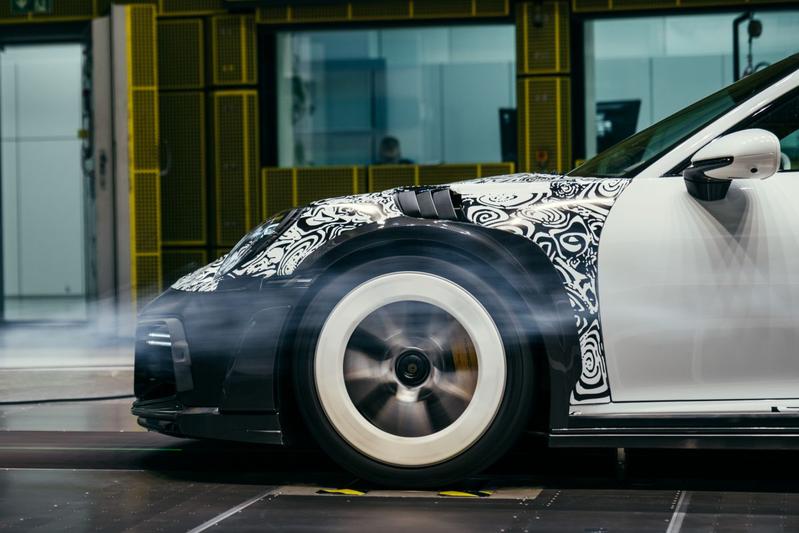 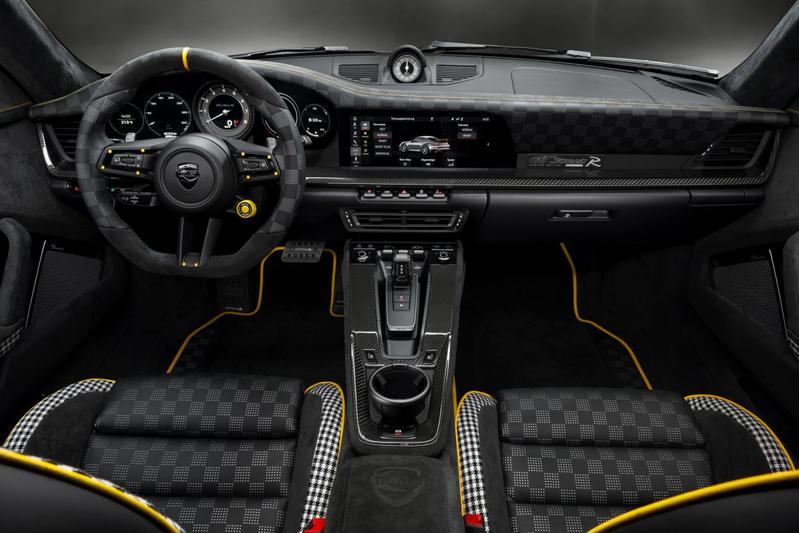 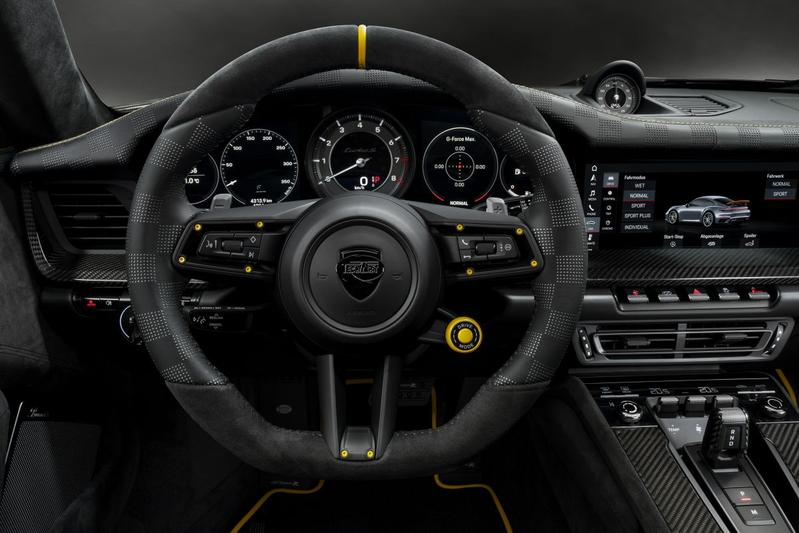 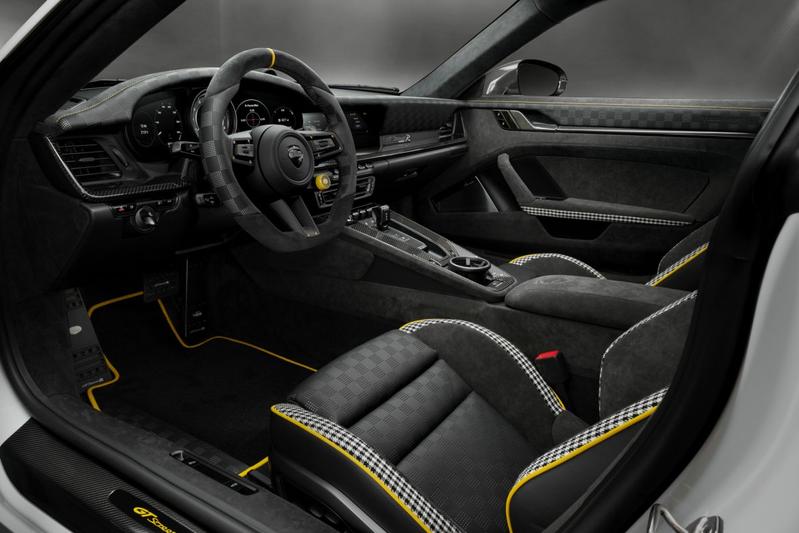 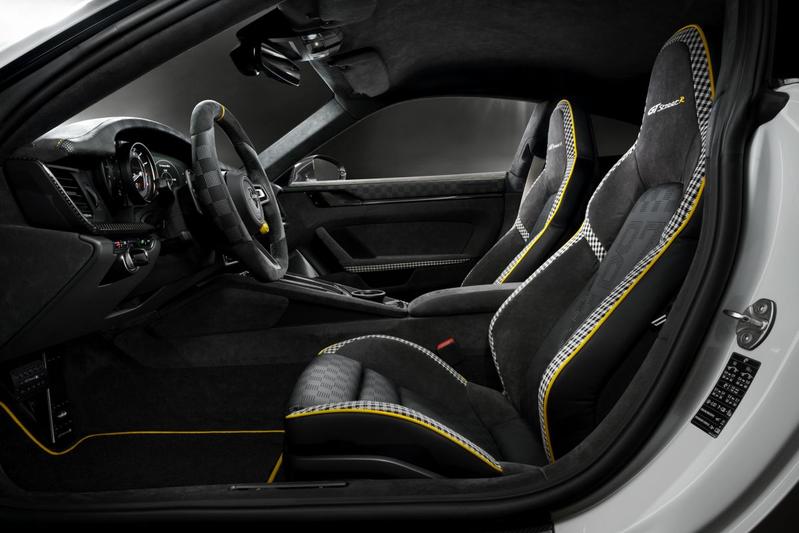 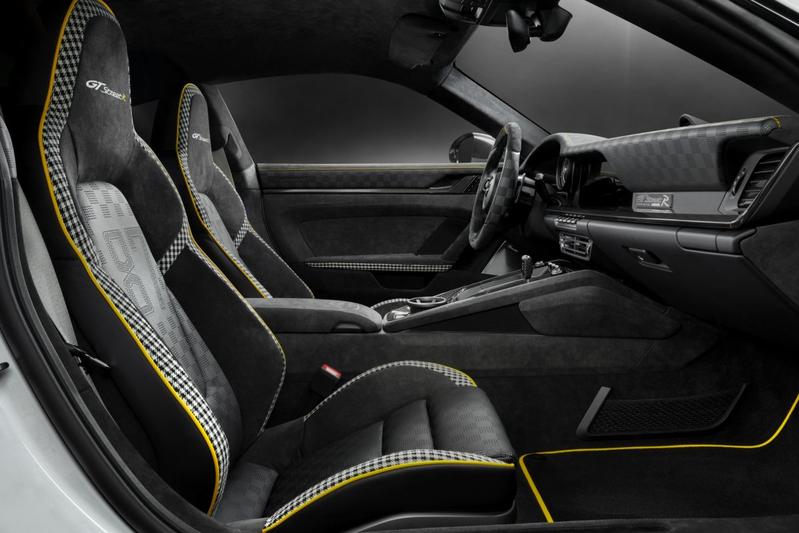 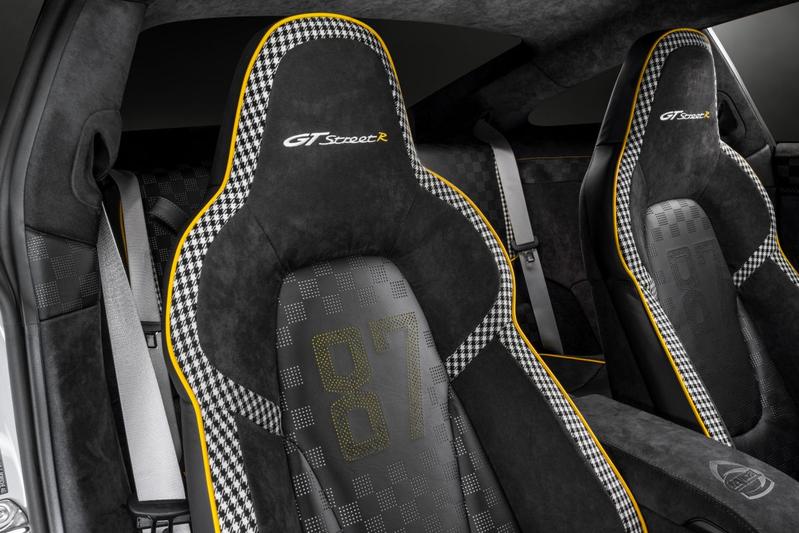 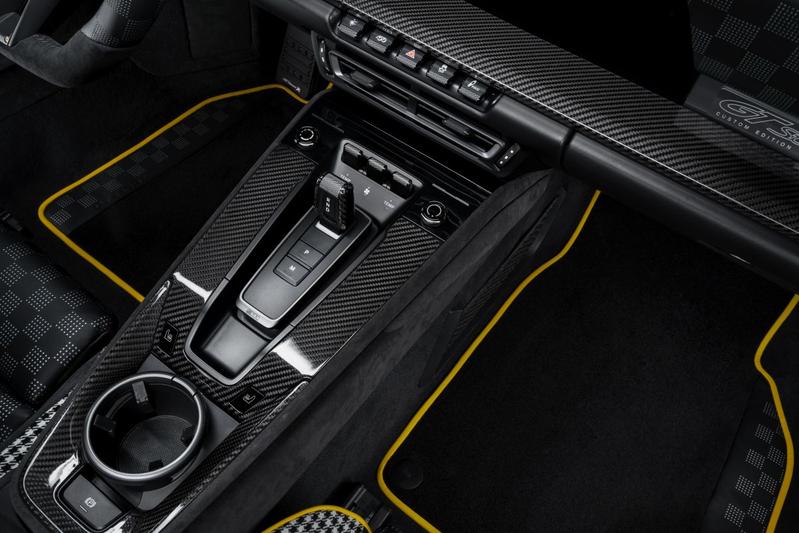 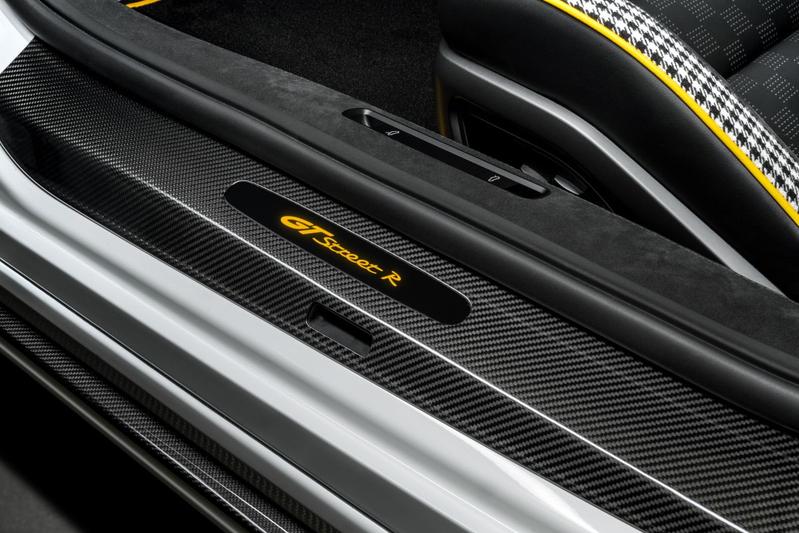 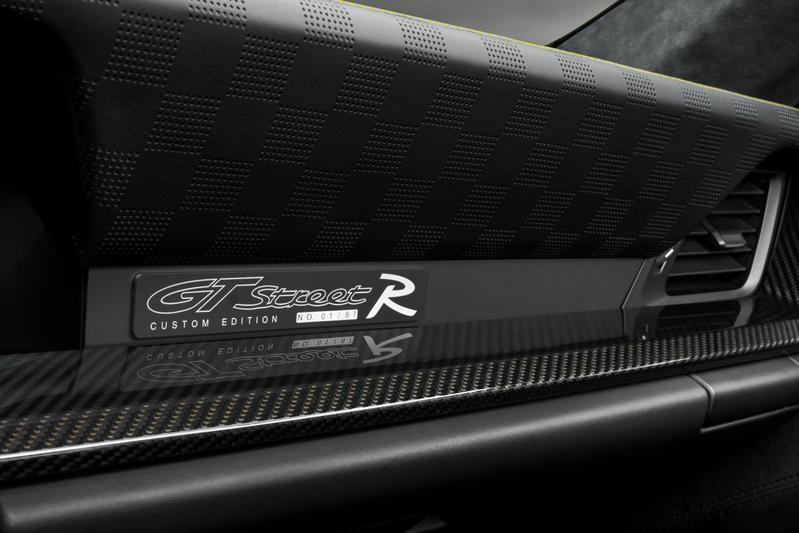 In fact, Porsche has something for everyone in the range of the 911. For a bloody fast and relatively comfortable variant you have to go to the Turbo S, if you want to hit the track then a GT3 (RS) offers solace. Combine those two variants and add a touch of extremism to it, and you get the Techart GTstreet R.

The heavily spoilered GTstreet R had already been caught on the street in camouflage outfit. What we predicted back then, now appears to be correct: the GTstreet R, based on the 911 Turbo S, does indeed get 800 hp under its spoiler. The maximum torque is no less than 950 Nm. It didn’t take Techart particularly much to achieve that ability. The six-cylinder boxer has new turbos and modified software for engine management and transmission. That’s it. Thanks to that extra bonk of primal power, the GTstreet R continues to a top speed of 350 km/h. Techart does not mention the acceleration time, but the standard Turbo S has already reached 100 km/h in 2.7 seconds. You will probably come a long way in keeping up with a Model S Plaid with the GTstreet R.

In addition to the turbos and the software, Techart mounts a sports exhaust with a valve system so that the boxer engine can be heard better. 800 hp is a bit too much of a good thing, isn’t it? Then you can also omit the modified turbos and settle for 710 hp and 900 Nm of torque. To keep all that power on the road, the GTstreet R has the necessary spoiler work and carbon fiber. In the front bumper are larger air intakes and a modified splitter, the fenders are slightly wider, increasing the track width by 30 mm, and at the rear a large diffuser is visible with two exhausts placed more towards the center. The huge rear spoiler is of course not to be missed. Techart emphasizes that the active aerodynamics of the Turbo S will be preserved. This can be seen, for example, in the central part of the rear spoiler, which rises under certain conditions.

Techart put the GTstreet R in a wind tunnel and came to the conclusion that the aerokit generates four times as much downforce as a standard 911 Turbo S. In addition, the lift on the front axle at 140 km/h has decreased by 45 percent. The upgrades are therefore not purely stylistic in nature. Another striking style element are the ‘aero discs’ on the forged wheels, which should also contribute to better airflow. Furthermore, Techart mounts a screw set and the GTstreet R is 15 to 25 millimeters lower to the ground. You can also only order lowering springs.

As a customer, you can go all out in the interior when it comes to personalization. Techart retains the more comfortable nature of the Turbo S here, but the tuner indicates that it is also working on a more track-oriented Clubsport package. The example in the photos is larded with a diamond pattern, Alcantara, lots of carbon fiber and yellow details. Of course GTstreet R logos should not be missing. Techart only builds 87 copies of this Turbo S on steroids. Each copy is individually numbered with a plaque on the dashboard.

The price of the conversion to a GTstreet R is at least € 73,000, excluding taxes. That price will of course go up depending on the options chosen. Oh yes, and you have to deliver a 911 Turbo S yourself for € 279,824.