Techzle Check Out: Speck Presidio Cases for iPhone 12 (and iPhone 11)

Speck Presidio cases for iPhone 11 and 12

Speck’s full line for the iPhone 12 consists of quite a few cases. We have emphasized these two models: 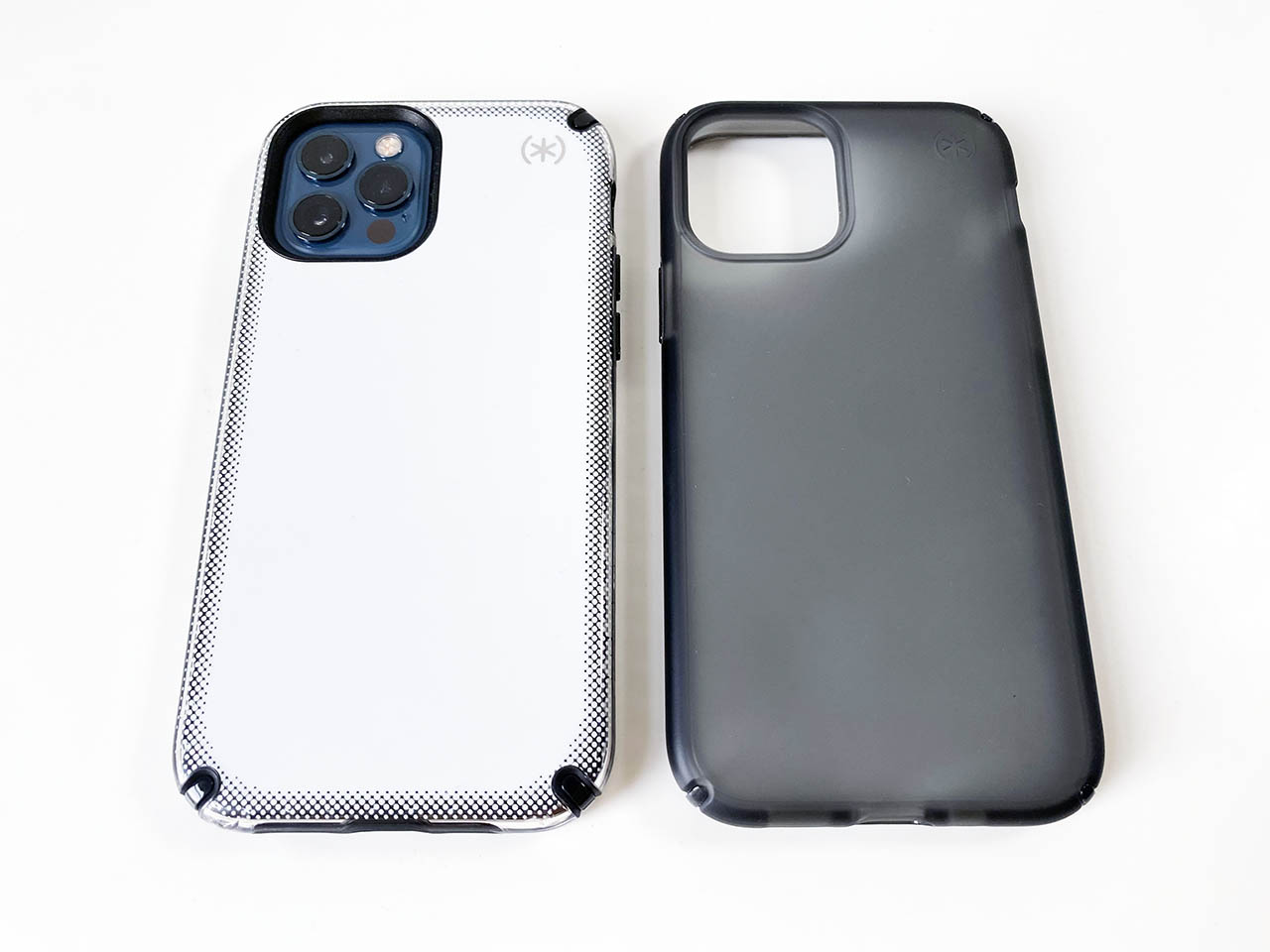 In addition, we received the Perfect-Clear (transparent, discolours less quickly), Grip (non-slip rubber fins) and Pro (also equipped with Armor Cloud but a bit more minimalistic in appearance). Each case therefore has a different property. What they all have in common is that they are provided with an antimicrobial treatment, thanks to a collaboration with Microban. As a result, according to the manufacturer, there is 99% less bacteria formation. 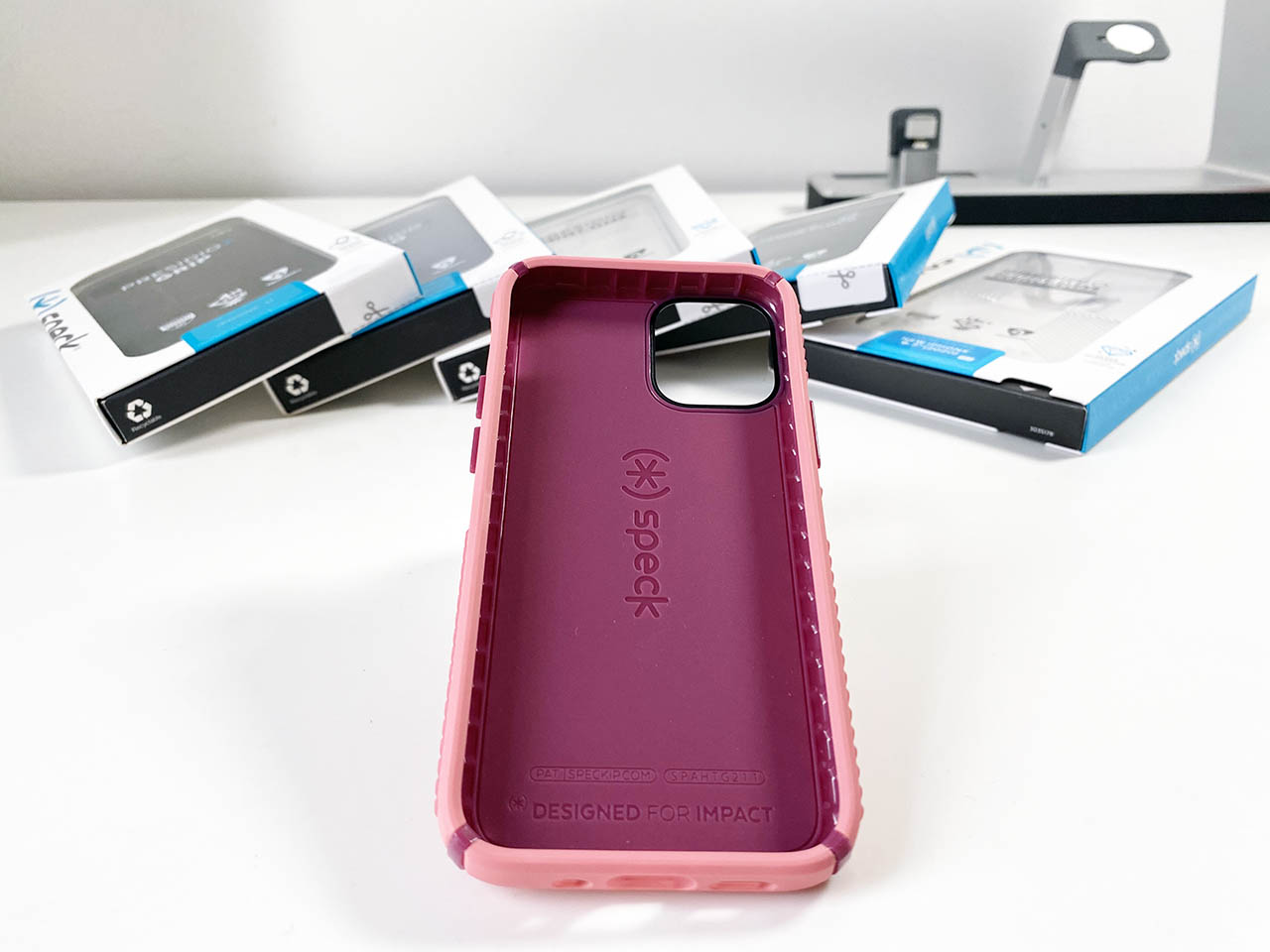 Speck’s covers also protect your phone against drops of up to 4 meters high. Of course, we wanted to test the latter, only in a somewhat more realistic scenario where the iPhone falls out of your hand. An experiment with the Presidio2 Armor Cloud (the most expensive protective cover in the list) seemed the safest to us, because it promises fall protection up to 4.8 meters. So nothing can go wrong there. Although…

The Speck Presidio cases all look different, as you can see in the photo above. In addition to serious looking cases, there are also models with glitter and color gradient. Also striking are the Grip cases that have rubber ribs. Our test sample in pink is a striking appearance and it is actually a shame that we don’t have an iPhone 12 mini yet to test it. 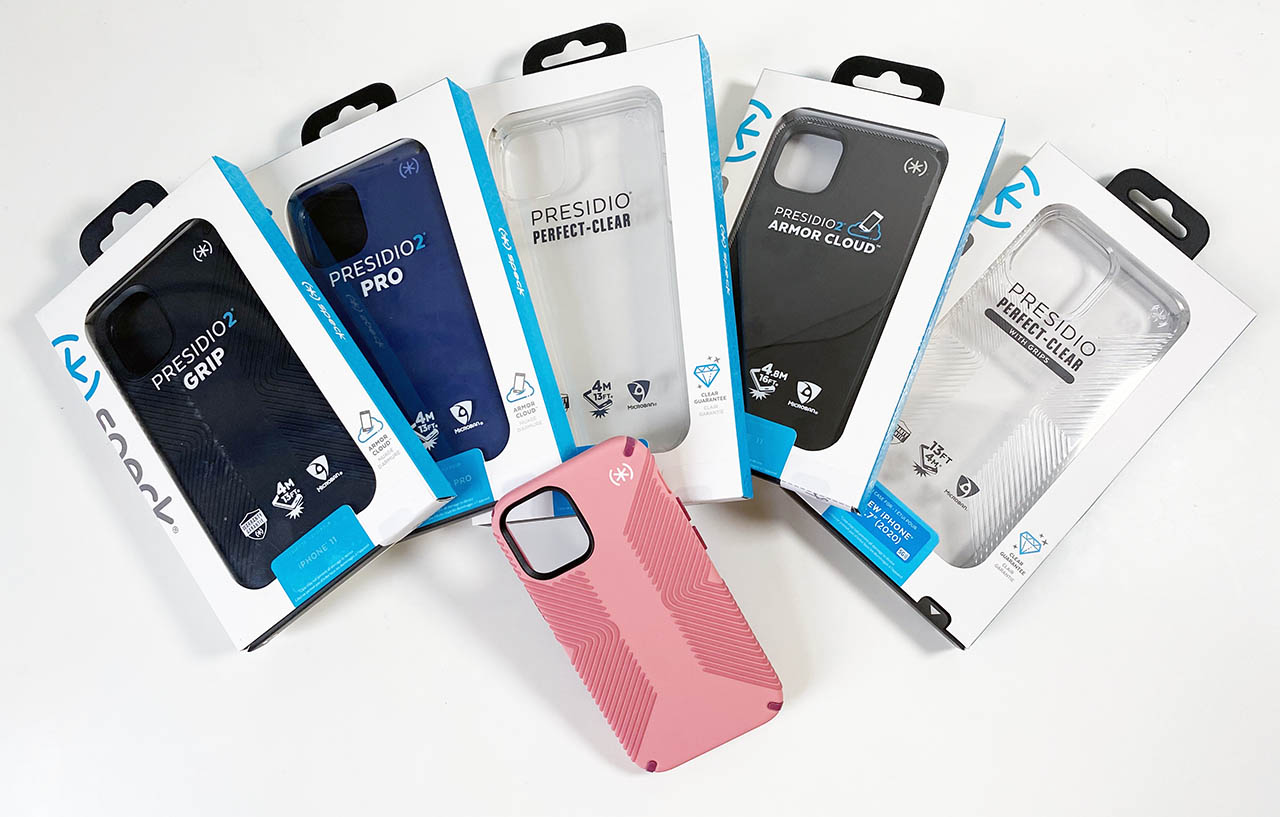 One characteristic is that all covers are not really thin – and that can also be explained when you consider that they are all drop resistant. Especially the Armor Cloud is on the thick side. There is also something special in it. According to Speck, it is a breakthrough in protection, where individual air capsules prevent damage on impact. The air capsules are aligned around the circumference of the cover. In the event of a fall, the capsules bend and the aircraft lands on an air cushion, such as an airbag. 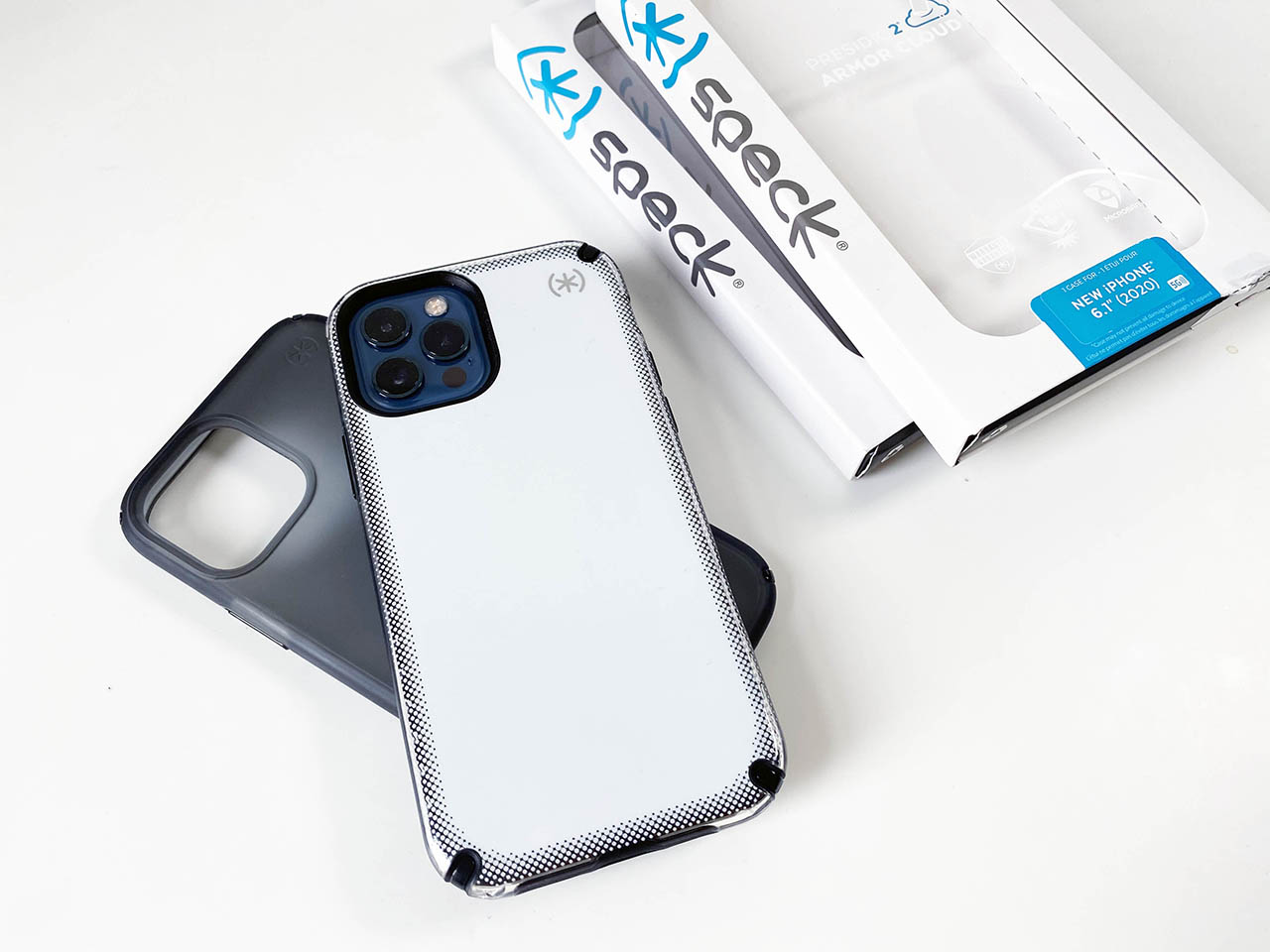 Speck Presidio in use

The Speck cases do not feature MagSafe technology. With the Perfect-Mist, however, the material is thin enough to attach your iPhone magnetically to the MagSafe Charger and to charge your device. With the Armor Cloud cover (the one with the airbags) that doesn’t work completely. You can charge, but the magnet does not pick it up properly, so your device can slide off again. That slipping is just a problem that Apple wanted to prevent with MagSafe.

Of course, a drop test cannot be missed with these cases. On our Instagram channel you can see a story where we drop the cover. Because I’m careful with my devices (and don’t just trust manufacturers when they say a 4.8 meter drop is fine), I tested it in a more realistic way: by dropping it from just over a meter. In most cases, the iPhone will fall from your hands or a table, not the balcony. 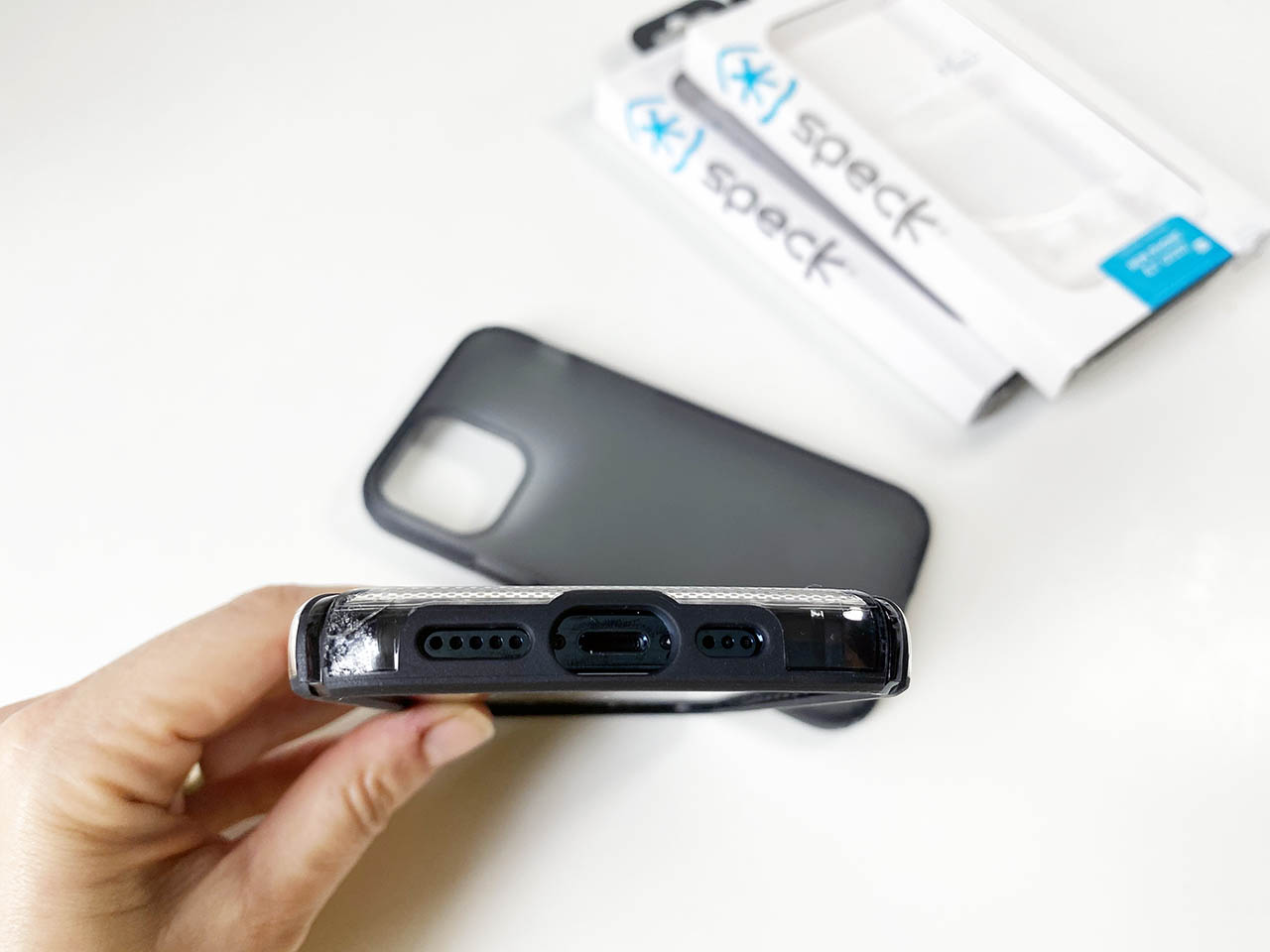 In short, the iPhone survived. But the cover did not come off unscathed. After two drops, the Armor Cloud cover had cracks and scratches on two corners. So your iPhone is safe, but the cover itself is not drop resistant. I can still use the Armor Cloud case for a while, but the protection with frequent drops will be a little less. That in itself is not bad, because spending a few bucks for a new cover is not as bad as glass damage on your new iPhone. But I still expected that the case itself would be more robust (and I should know, because I regularly drop my iPhone, fortunately with a case around it). 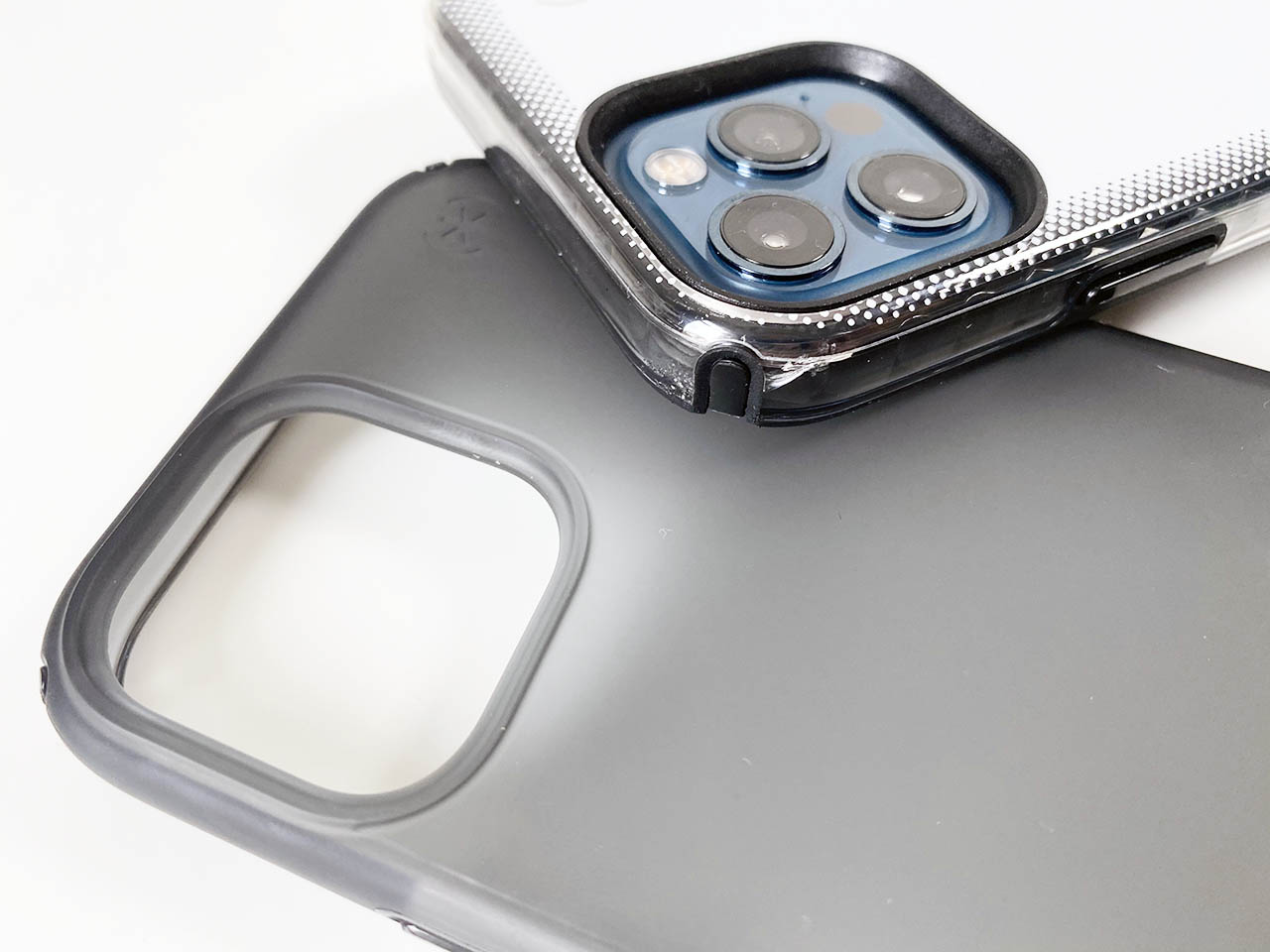 Finally, I tested how easy you can put the Speck Presidio covers on and remove them again. We had less good experiences with the AirPods cases from Speck: they were almost impossible to remove.

Doing it on and taking it off is a bit more difficult than with Apple’s own covers. It’s because the Speck covers partially protrude over the screen. There are no magnets, so the only way to keep the cover in place is to provide an extra edge on top of the screen. That edge is so narrow that it doesn’t bother you. So it is not the case that content on your screen is covered. Taking it off is therefore a matter of tugging and pulling. It is best to press hard on the camera, because the cover has a hole at that point and is the least rigid. All in all, I found removing the cover a more difficult job than throwing my iPhone in the street.

The Speck Presidio cases have the advantage that they are available in many variants, both for the iPhone 11 and 12. They are all treated antibacterial and protect your iPhone against drops, but otherwise they all have different properties, such as extra transparency, extra fall protection or extra grip.

However, the case itself is not drop resistant: our copy is damaged on two points after dropping and has a crack. Fortunately, the case took the first blows and our iPhone remained unharmed.

The Speck Presidio covers are available in the Benelux at Appelhoes, Phone House, Telecombinatie, BCC, Office Center, RR Commerce and GSMpunt. The prices vary from € 29.95 to € 39.95.

Wolff: Russell makes too many mistakes for Mercedes seat

Russell does not have to count on a quick switch to a Mercedes seat, he makes just too many mistakes for Wolff. At the Sakhir...
Read more

The ambitious brand-new manufacturer Byton has a new concept car behind the scenes, of which Techzle can show you the first images exclusively. For the...
Read more

Audi and the Chinese FAW are further tightening their ties. From 2024, the two parties will jointly build electric Audis in the higher...
Read more

The nose of the Aston Martin Vantage remains a bit controversial, luckily the British car manufacturer now lets you choose which one you want. although...
Read more

With a Ferrari F8 Tributo you don't have to worry that you won't stand out. If you send it past Novitec, it can...
Read more

The new Zens Modular Series is a series...
Read more
Other Gadgets