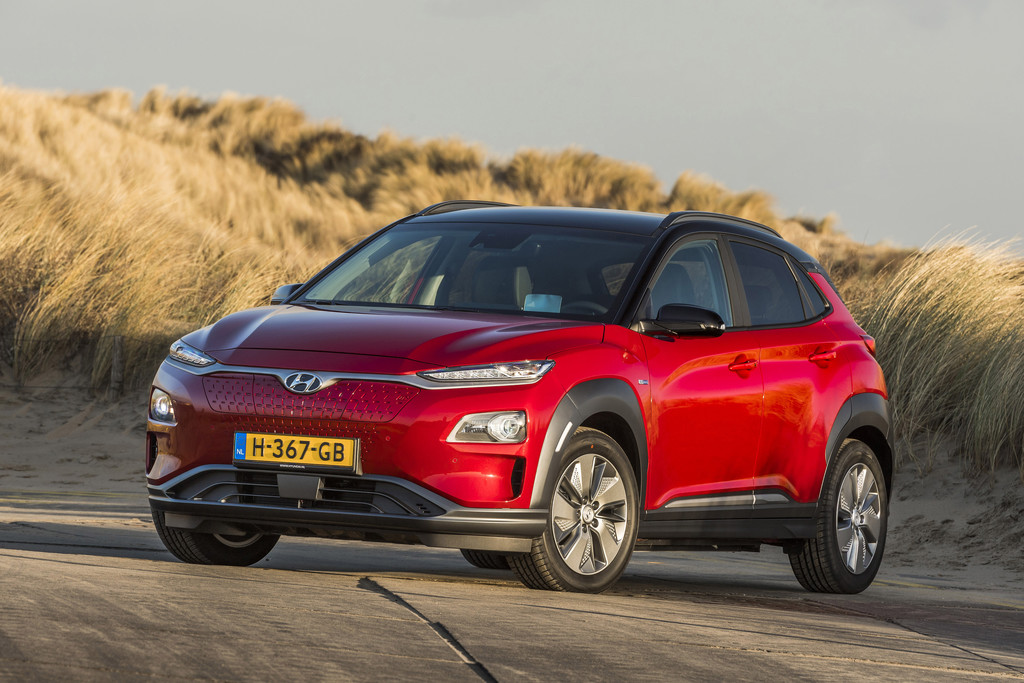 The updated Hyundai Kona Electric can now be ordered. In addition to the three-phase charging system, there are more improvements, including a larger action radius. Thanks to a new factory, the delivery time is also shorter than before.

Earlier Hyundai announced the renewal of the Kona Electric. The car can now be ordered. The SUV will be built from April. From now on, this will also happen in the Czech Republic, where a new factory will open next month. As a result, the popular electric car will be delivered faster than before. Hyundai Netherlands director Berend Jan Hoekman: “Whoever orders now, will drive before the summer.” The starting price is 36.795 euros, but larger battery pack from 41.595 euros.

Although the European type approval is not yet fully completed, the brand already gives provisional WLTP figures about the extended range. In the electric Kona with 64 kWh battery pack, the range increases from 449 to around 480 kilometers, with the 39 kWh battery from 289 to about 305 kilometers. For this Hyundai has adjusted the engine management and the Kona Electric gets different tires.

Whoever orders now, drives before the summer

The decrease in charging time at public charging stations or a charging point at home is, thanks to the three-phase 11 kW AC system, at around 20 percent. Specifically, this means that charging the 64 kWh-Kona takes just under 7.5 hours, with the 39 kWh version you will be ready in less than 5 hours. Charging at a 100 kW (DC) fast charging station takes only 54 minutes more for both versions.

In addition to the new charging system, the Kona Electric is now standard equipped with an eCall safety feature, Hyundai Bluelink (remote car operation and information, including Find my Car function), 5 years of Live Services and a new 7-inch supervision cluster in the instrument cluster. Optionally available is the new infotainment system with 10.25 inch touchscreen. Apple CarPlay and (preparation of) Android Auto are part of this.

Sustainable forestry could enable a material revolution. (Image: Sabine Hortebusch / iStock) Instead of using cement and steel, we should rely on a tried-and-tested natural...
Read more

View of the Red Sea coast. (Image: Konoplytska / iSTock) Much of the world's natural gas and oil is extracted in the Middle East -...
Read more

This may have led to the discovery of the fossil. (Image: Christian Klug and Beat Scheffold) In the age of the dinosaurs, the pterosaurs were...
Read more

Leaked: the new Hyundai i20

The third generation of the i20 is a sporty appearance. Before Hyundai has the opportunity to present the car itself, the new i20 has...
Read more
Cars

These are the 15 thickest sports sedans of the 90s

The thickest, coolest and coolest Autobahn guns, with room for the family. These are the thickest sports sedans of the 90s. The Lotus Omega has...
Read more
Cars

Until the German court has passed judgment in any case. Although Tesla is a lot greener than most other car manufacturers, they too are struggling...
Read more
Cars

The stock market follows the example of the China GP. In the car world, coronavirus is not only experiencing serious inconvenience in terms of production....
Read more
Cars

This is the new Racing Point car

Pink still dominates, but there is a new title sponsor. It is now largely known what the field of participants for the coming season will...
Read more