Using the iPhone as a flashlight: this is how you do it

You can turn the iPhone into a flashlight or a flashlight. To do this, use the camera’s flash light or a brightly lit screen. In this tip you can read how to turn on and use your iPhone flashlight.

With the iPhone, you always have a flashlight at hand, making it easier to find the keyhole of the front door or car door in the dark. Or check in the cinema whether you really didn’t miss anything at the end of the film. There are two ways to use the iPhone as a flashlight: with the camera’s built-in flash or by making the screen as bright as possible. This tip explains it.

On the lock screen of iPhones with Face ID you will find a button for the flashlight. The button is at the bottom left. By briefly putting your finger on it, you switch the flashlight on and off again. You can find this button on the iPhone X and later.

iPhone as a flashlight: quick method via the Control Center

In the Control Panel you will find all kinds of frequently used functions. Control Center becomes visible when you swipe up from the bottom of the screen or on iPhone X, swipe down from the top right corner.

You use the flashlight in the Control Panel as follows: 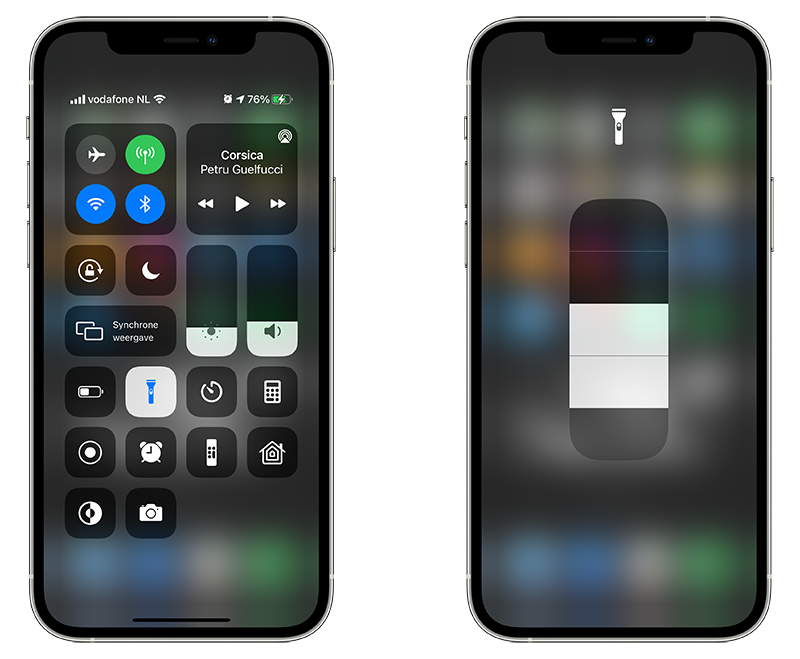 Adjust the brightness of the flashlight

Turn on iPhone flashlight via Siri

iPhone as a flashlight: via the Camera app

You can also turn on the flashlight via the Camera app. This works as follows:

You could also turn on the flash by taking a photo, but the flash will only be active for a very short time.

Flashlight apps for your iPhone

There are all kinds of apps that make it easier to start the flash. You tap an app icon and the flash lights up immediately. An example of this is the Flashlight app (link), which also has an Apple Watch app. Most flashlight apps date back to the time when the option was not yet present by default. Many apps are therefore outdated and offer little or no extra options.

But you may find a separate app with only one function a bit too much. In that case, we recommend the Launch Center Pro app (link). This app has a shortcut to the flashlight (‘flashlight’), but you can also create all kinds of shortcuts to apps and activities. This way you can quickly post a message on Twitter, start a new iMessage or call a contact. Useful!

Use iPhone screen as light

Is the flashlight inconvenient for you? Then you can also use the screen as a flashlight. This also works with iOS devices without a flash, such as an iPad. You do this as follows:

For this method, we prefer to adjust the brightness via the Settings, because the screen is then immediately light in color.

The brightness slider is also accessible from the aforementioned Control Panel. Do you want an extra boost in your screen brightness? Then you scroll to an empty webpage or a screen that is mostly white.

You can also use the Apple Watch as a flashlight, but because there is no flash light in it, you will also have to use the screen.

Honda wants to drag racing with the Honda e

This Honda e-Drag is no joke. Or we don't understand Japanese humor. One of the advantages of electric cars is that they can usually...
Read more

This genius exotic with V16 is going under the hammer

This Cizeta V16T was intended for the Sultan of Brunei (who else?), But luckily never arrived. There is one legendary car collection that eclipses all...
Read more

With this X5 you are lord and master on the Autobahn. We can talk long and short about the sense and nonsense of sporty SUVs...
Read more

This panda is not to be trifled with. Understated is not the right word, but a Bugatti Chiron has a different look than most other...
Read more

What is the thickest very expensive young timer for 20 grand? Everyone does it sometimes. No, not on Second Love to see how you...
Read more

Use Face ID with a mouth mask? That’s how you set it up

A face mask is now indispensable in the...
Read more
Apps & Software

How do you prevent Facebook from knowing everything...
Read more
Apps & Software

Repair your Mac and your software

Fortunately, it almost never happens, but something can also go seriously wrong on a Mac. For...
Read more
Apps & Software

Activity trends: this is how trends work in the Fitness app

On the iPhone, you get better insights into...
Read more
Apps & Software

Would you prefer your favorite app in English...
Read more