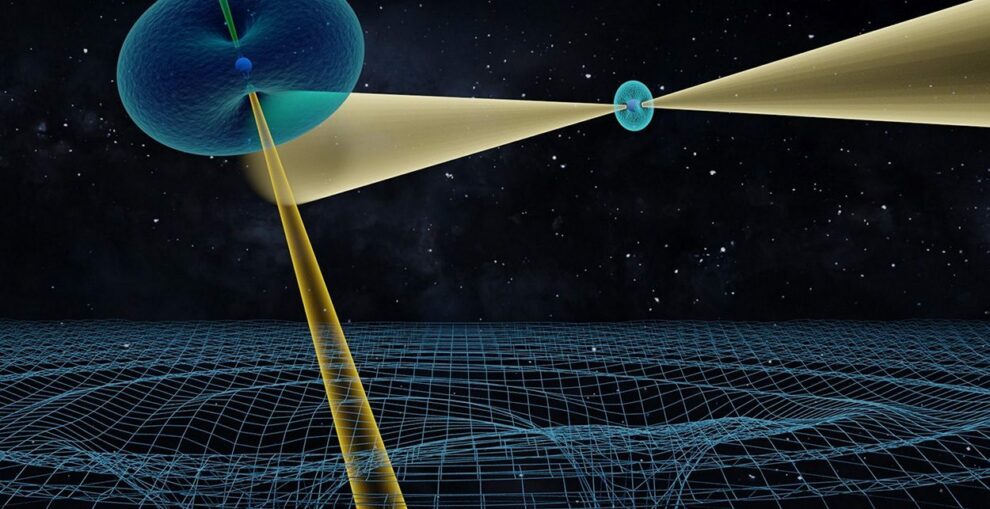 Albert Einstein’s general theory of relativity forms the foundation of our physical worldview. Now the 100 year old predictions of the famous physicist have passed one of their most comprehensive tests. A system of two orbiting pulsars has enabled astronomers to check seven key statements of general relativity. To do this, the researchers observed the unique system over a period of 16 years with seven radio telescopes distributed around the world. The result: Einstein’s theories were once again confirmed in all aspects.

It has been more than 100 years since Albert Einstein’s general theory of relativity overturned some of the basic assumptions of physics at the time and established a completely new concept of gravity with space-time. Since then, its laws have formed the foundation of the physical worldview. Among other things, they explain why light is deflected and stretched in the vicinity of large masses, why time runs slower under the influence of gravity and that mass can be converted into energy. However, there are some phenomena in the cosmos that cannot be explained by Einstein’s theories alone. For this reason, among other things, scientists try to sound out possible limits of the general theory of relativity. Observing a deviation from the predictions of this theory would be an important discovery that would open a window to new physics. So far, however, the theory of relativity has withstood all tests and verifications.

Astronomers working with Michael Kramer from the Max Planck Institute for Radio Astronomy have now published the results of one of the most comprehensive tests to date. To do this, the team observed a unique system of two closely orbiting radio pulsars with seven linked radio telescopes for 16 years. The neutron stars, which emit strong radio waves, are more massive than the sun, but only around 24 kilometers in size. They circle each other at around a million kilometers per hour and turn around themselves. The double pulsar PSR J0737-3039 A / B combines enormous masses in a small space and also brings movement into the game. “Such a rapid orbital motion of such compact objects enables us to test a number of predictions of general relativity – there are seven in total,” explains co-author Dick Manchester of the Australian research organization CSIRO.

The first basic assumption checked on the double pulsar is the loss of energy that the system suffers from the radiation of gravitational waves. This leads to the orbits of the two neutron stars becoming narrower over time, which in turn shortens their orbital times. The astronomers were able to observe this shortening on the basis of the pulsed radio radiation from the two pulsars. “To our delight, we were able to test this cornerstone of Einstein’s theory with an accuracy that is 25 times better than the Nobel Prize-winning Hulse-Taylor pulsar and 1000 times better than is currently possible with gravitational wave detectors on Earth” , reports Kramer.

The regular pulses of the two star remnants also made it possible to detect the gravitational precession of the pulsar orbits with an accuracy of one in a million. This relativistic effect is also known from Mercury’s orbit. In the case of the planet, it ensures that the points of the orbit closest to and furthest from the sun shift in the course of time like a rosette. The research team was also able to confirm the time expansion caused by gravity, another basic assumption of the theory of relativity.

Several effects of gravity on the light were also confirmed: The radio waves emitted by the pulsars showed the expected redshift and thus expansion due to the enormous force of gravity of the pulsars. The team was also able to demonstrate what is known as the Shapiro delay – the additional time that the radio waves need to get out of the deep space-time sink. The astronomers have also demonstrated for the first time a completely new effect predicted by the theory of relativity: “We see for the first time that the light is not only delayed due to a strong curvature of space-time around the companion, but that the light is also delayed by a small angle of 0 .04 degrees, ”explains co-author Ingrid Stairs from the University of British Columbia in Vancouver. “Never before has such an experiment been carried out with such a strong space-time curvature.”

The rotation of the pulsars – one rotates around 44 times per second, the second once every 2.8 seconds – enabled further tests. This made it possible to determine how much mass the rapidly rotating neutron star is losing due to its intense electromagnetic radiation: “This radiation corresponds to a mass loss of eight million tons per second,” reports Manchester. “That may seem like a lot, but it is only a tiny fraction of the total mass of the pulsar.” Another effect predicted by Einstein is the effect of the pulsar’s rotation on the surrounding space-time: it is slightly dragged along with it. “Physicists refer to this as the Lense Thirring Effect or Frame Dragging,” explains Kramer’s colleague Norbert Wex. Measuring this effect provides valuable information about the size and composition of the neutron star.

Overall, these measurements represent a particularly precise and comprehensive test of general relativity under cosmic conditions. “We have achieved a level of precision that is unprecedented,” says Kramer. His colleague Paulo Freire explains: “Our results are a good addition to other experimental studies that test gravity under different conditions or observe different effects, such as gravitational wave detectors or the Event Horizon telescope.” That was more than a hundred years ago Albert Einstein once again proven the principles established by Albert Einstein.

Nevertheless, physicists will continue to look for gaps and deviations, because there are some phenomena in the cosmos that cannot be explained by Einstein alone. These include dark energy and the accelerated expansion of space. “Future experiments with even larger telescopes can and will go even further,” says Kramer. “Our work has shown how exactly such experiments have to be carried out and what subtle effects have to be taken into account. And maybe one day we will really find a deviation from the general theory of relativity … “

Planets can “rejuvenate” their stars

Artist's rendering of a hot Jupiter orbiting its host star closely. The "twin star" of the double system can be seen in the...
Read more
Astronomy

The peak of volcanism on Mars was three to four billion years ago. But signals point to continued unrest. © ESA/DLR/FU (G. Neukum) ...
Read more
Astronomy