Electricity from the air 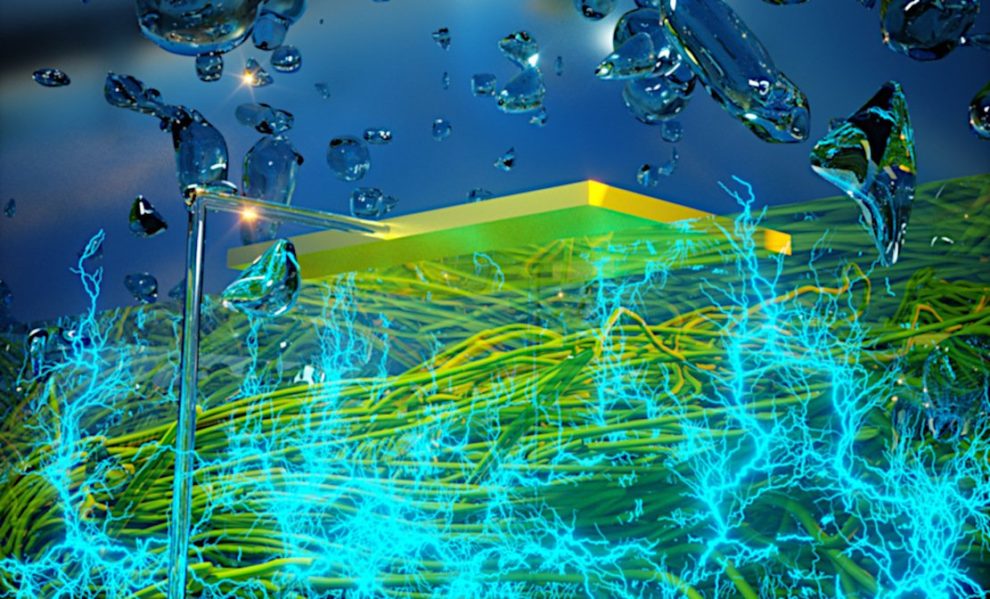 Tapping energy from the air – that sounds like an illusory dream – but it is possible, as a study now shows: Researchers have developed a device that can extract electrical energy from the air humidity. The key element of their “air generator” is a bacterial protein that strongly binds water vapor and conducts electricity. The prototype of the device can continuously supply electrical energy and thereby operate devices, tests show. There is literally exciting potential in the environmentally friendly concept.

Obtaining clean energy from the environment or from simple processes has long been a goal of research. Known technologies such as solar cells, thermoelectric devices and mechanical generators, however, have a catch: A sustained power supply is usually not possible because the energy source is not continuously available. There have already been attempts to use the energy contained in the air in the form of ionization processes. Previous technologies, however, could only provide electrical energy for a short time because there was no continuous subsequent delivery process. But as the researchers led by Derek Lovley from the University of Massachusetts in Amherst report, they have now developed a concept for sustainable power supply from the air.

The basis of the technology is a discovery that dates back 30 years: Lovley had discovered an unusual type of bacteria in the mud of a river. Studies have shown that Geobacter sulfoaducens gains energy through electrical processes. For this purpose, this microbe is wired to its environment via special proteins. Since these discoveries, Lovley and his colleagues have been exploring the technical potential of these exciting bacteria and their electrically conductive protein nanowires. The team found that when layers of the protein are brought into contact with electrodes in a certain way, voltage is created. Subsequent studies then showed that this effect is based on the strong absorption power of the Geobacter proteins against air humidity. The researchers have now succeeded in making this effect technically usable.

As they explain, their device called “Air-Gen” consists of a ten micron thick layer of protein nanowires. This component is completely covered from below with a flat gold electrode. From the top, the layer is connected to another electrode that seals only a small part of the protein surface. There, protein nanowires are directly exposed to atmospheric moisture and bind them intensively. In the lower area, however, this is not the case due to the shielding effect of the flat electrode. This creates a self-sustaining gradient of water saturation, which creates tension, the scientists explain: Through processes in binding air humidity, the upper area of ​​the element becomes the negative pole and the lower area becomes the positive pole.

As the researchers report, an Air-Gen unit can provide a sustained voltage of approximately 0.5 volts and a current of approximately 17 microamps per square centimeter. By linking several units, higher voltages and currents can be achieved that supply devices with energy. For example, the researchers lit an LED lamp – with the energy from the air.

Lovley and his colleagues now see considerable potential in the concept: the technology is environmentally friendly, renewable and inexpensive and can deliver energy around the clock. The researchers emphasize that this does not require a particularly high level of humidity: Even in desert areas, it is sufficient to create the saturation gradient in the generator. According to them, bacterial proteins can now also be mass-produced: Scientists no longer harvest them from the difficult-to-grow Geobacter – they have equipped laboratory bacteria with the genetic program for producing the substance. “We turned E. coli bacteria into protein nanowire factories,” says Lovley.

The researchers believe that their invention may soon become commercially available. They are currently working on small air-gene patches that could be used to operate portable electronics such as health and fitness monitors and smartwatches. “However, the ultimate goal is to develop even more powerful systems,” says the lead author of the Jun Yao study. “For example, the technology could be integrated into wall surfaces that contribute to the power supply to buildings. As soon as we can produce the proteins on an industrial scale, large systems are conceivable that can contribute to sustainable energy generation, ”says the scientist.

Buy Office: What you want to know about Microsoft 365

There are several ways to buy Office. The offer can be confusing, which is why Microsoft is...
Read more
Computer & Phone

A mixture of moon dust, water and astronaut urine could be used to build lunar stations. (Image: ESA, Foster and Partners) A golden resource for...
Read more
Computer & Phone

There are three ways to reset Windows 10

While Windows 10 is a reliable operating system, things can sometimes go wrong. Sometimes then the only...
Read more
Computer & Phone

At a time when we all need to stay indoors as much as possible, you may be...
Read more
Computer & Phone

AI systems can convert brain signals into speech. (Photo: Andreus iStock) When a person loses the ability to speak, it is a drastic cut in...
Read more
Computer & Phone

Synology of Qnap: Differences and Similarities

A nas provides central storage space in a network, with the advantage that you can access the...
Read more