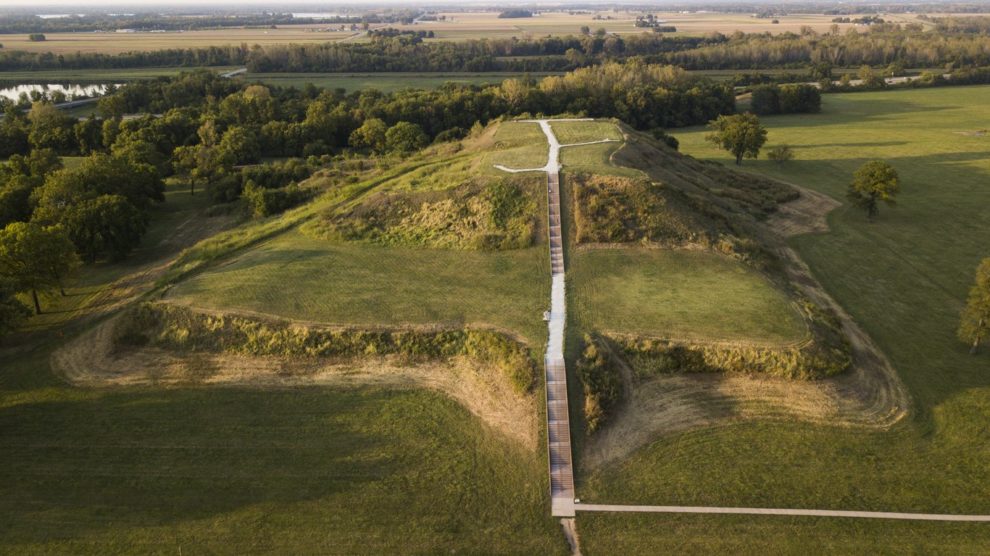 The mysterious North American Indian metropolis of Cahokia was abandoned around 1400 AD, it was previously believed. But a study now documents that the place did not remain deserted after the end of the Mississippi culture: From the 16th to the 17th century, settled Indians once again populated the former urban area. But before the arrival of the Europeans in Cahokia, this settlement history had already ended, is becoming apparent.

Monumental ritual mounds, extensive residential areas and defenses: the Indian city of Cahokia on the banks of the Mississippi was the largest pre-Columbian city north of Mexico in its heyday in the 11th century. The impressive settlement is considered the main center of the so-called Mississippi culture, which at that time shaped the valley of the mighty river. In addition to hunting and fishing, the cultivation of maize on the fertile alluvial land formed the food basis for the inhabitants of Cahokia. The abundant food supply at the peak of development enabled a population of tens of thousands of people to live together in a highly developed society. However, as was evident in earlier investigation results, a slow decline began, which culminated in around 1400 in the complete abandonment of the settlement.

It is unclear what exactly caused the end. However, climatic factors probably played an important role: a study last year showed that the decline and abandonment of Cahokia was accompanied by climatic fluctuations and frequent flooding of the cultural land by the nearby Mississippi. “Based on the archaeological finds, it was previously assumed that Cahokia would subsequently become a ghost town,” says A.J. White from the University of California at Berkeley. That created the myth of a place abandoned forever by Native Americans. But as White and his colleagues were now able to show, the exodus around 1400 was not the end of the Indian settlement history at the legendary place.

In addition to other sources of information, their results are based on the analysis of sediment core. They come from the nearby Horseshoe Lake, where the sewage from the settlement area once landed. In order to draw conclusions about the development of Cahokia, the scientists recorded so-called faecal stanols in the deposits. These are stable organic molecules that are formed in our intestines when we digest food. The researchers were able to draw conclusions about the local settlement history by examining and chronologically arranging these remains from the human shops.

Do not leave permanently

The results show that the region of Cahokia, according to archaeological finds, reached a population minimum around 1400 AD. But the place did not remain deserted forever: From around 1500 there was a renewed settlement, is evident in the analysis results. This means that after the abandonment of Cahokia and a period of depopulation, Indians again populated the area of ​​the former city in the 16th century. They lived there until the 17th century and lived on the cultivation of corn in the surrounding fields but also on the bison hunt, according to the information.

According to the researchers, it was apparently people from the Illinois ethnic group, whose tribal areas extended over large parts of today’s Midwest at the beginning of the 17th century. Although they were also sedentary, they did not develop such complex social structures as the people of the Mississippi culture did before. That is why they did not leave such clear archaeological traces, the scientists explain.

It is now becoming apparent that the decline of the Mississippi culture did not mean the end of the presence of Native Americans in the Cahokia region: in the 1500s and 1600s, the area of ​​the once impressive complex was once again a settlement area. But even before the first Europeans spread to the region, this story had already ended, the researchers say: Wars among the Indian tribes that were linked to European colonization and introduced diseases had the Indian population in the region in the early stages 18th century already drastically reduced. When the first European settlers arrived, the area with the remains of the monumental buildings therefore seemed deserted.

Volkswagen announces that it will leave the German factories inactive for a longer period of time. The situation with the coronavirus does not yet...
Read more