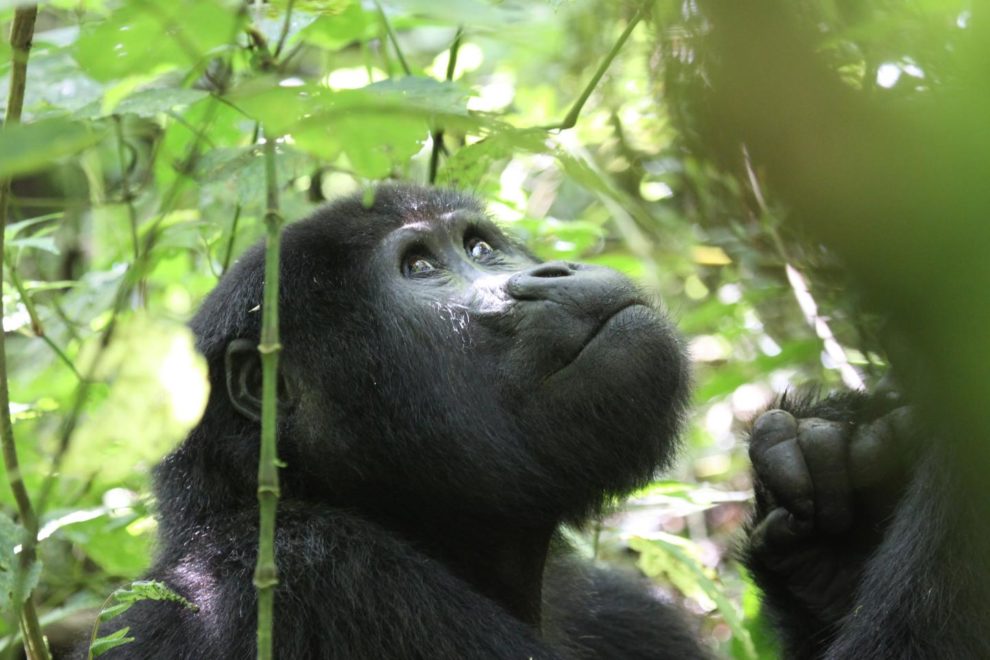 A lot of people are currently suffering from colds or the flu – but these diseases are even more dangerous for our relatives from the animal kingdom than for us: Tourists pose a high risk of transmitting infections to the endangered mountain gorillas. For this reason, this applies to guided tours Rule: keep seven meters away from the animals. But do the visitors follow this rule? A study now documents almost never. To protect the animals, a more consistent implementation of the separation regulations or other measures are therefore in order.

The story of behavioral scientist Dian Fossey made the “Gorillas in the Mist” famous. The mountain gorillas (Gorilla beringei beringei) only occur in East Africa and are still threatened with extinction despite intensive protection efforts. Their population is estimated at around 1000 individuals. Around 40 percent of them live in
Bwindi Impenetrable National Park in southwestern Uganda. They are at the center of a growing tourism industry: visitor groups are led to the animals to experience them “almost up close”.

This tourism is both a curse and a blessing for the mountain gorillas: the lucrative source of income promotes protection efforts, but the small population is exposed to enormous danger due to the proximity of humans: infectious diseases that infect humans can easily spread to gorillas – with them however, they often have far worse consequences and can be fatal.

For this reason, protective regulations have been in place for a long time: tourists should always keep a distance of at least seven meters from the animals. This is considered a safe distance to avoid droplet infections. However, by getting used to humans, the animals also tolerate greater closeness. An international team of researchers has now carried out a study to determine the extent to which the safety distances are maintained. They evaluated data from surveillance cameras. The focus was on 53 gorilla visits during the high season in the Bwindi Impenetrable National Park.

It turned out that the guides emphasize that they should keep a distance of more than seven meters before the tour, but unfortunately this rule is usually not implemented: the seven-meter distance rule was broken in 52 of the 53 tours. Almost 70 percent of the encounters took place less than or equal to seven meters. In 14 percent of the observations, the distance between human and gorilla was only three meters.

“Although it seemed clear that tourists often get too close to the gorillas, I was surprised at the extent of the problem,” said co-author Annalisa Weber of Emory University in Atlanta. Her colleague Gladys Kalema-Zikusoka from the organization Conservation Through Public Health in Uganda adds: “There is a growing threat that gives cause for concern about the maintenance of long-term tourism for the observation of gorillas. Measures are needed to limit the risk of disease from tourists, ”said Kalema-Zikusoka.

However, as she and her colleagues continue to report, there is potential for this and, according to surveys, most tourists also advocate stricter precautions. The wearing of face masks could possibly be introduced, and the importance of adhering to the distance rules could also be taught more. “Many stakeholders are ready to take better measures to protect gorilla health,” said co-author Nancy Stevens of Ohio University in Athens. So there is hope that gorilla tourism can become more a blessing than a curse for the endangered great ape species.

Among other things, crows have shown their ability to compare quantities. (Image: Andreas Nieder) More, less or the same amount? Not only humans, but also...
Read more
Biology

The bizarre relatives of our silverfish can grow up to seven centimeters long. (Photo: Alvaro Zúñiga-Reinoso, University of Cologne) It is considered the driest desert...
Read more
Biology

A filter system for sampling in the Arctic Framstrasse is launched. (Photo: Alfred Wegener Institute / Melanie Bergmann) Microplastics have long been found in all...
Read more
Biology