How the hexagon of Saturn is created 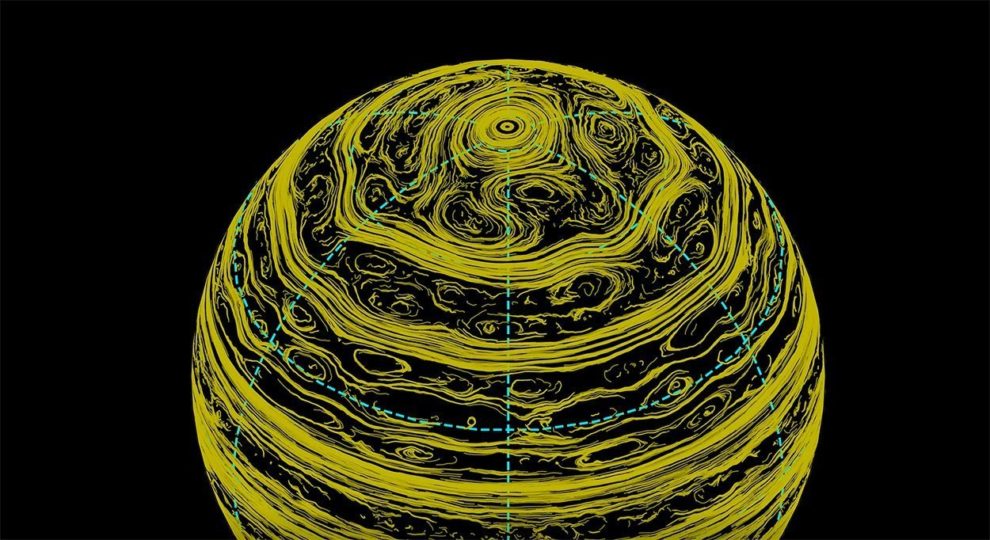 The hexagonal flow vortex at the north pole of Saturn is one of the most striking and strange phenomena in the solar system. Now a simulation sheds new light on how this structure is created from clouds and storms. Accordingly, the roots of the flow pattern lie at a greater depth than long thought – which could explain the decades-long stability of the hexagon. In the simulation, interactions between zonal flow bands were sufficient to form the central vortex surrounded by cyclones rotating in opposite directions. Superficial turbulence in the Saturn atmosphere changes its arrangement slightly, but the basic pattern remains, as the researchers report.

The strange, hexagonal flow pattern was discovered in the 1980s when researchers were evaluating the data from the Voyager 2 space probe. These showed a striking geometric cloud pattern at the north pole of the gas planet, which was not observed on any other planet in the solar system. This pattern consists of a central vortex, which is surrounded by a hexagonal, relatively sharply delineated flow band up to around 15 degrees from the North Pole. This wind band moves in the direction of rotation around the planet and has been largely unchanged in shape and position for around 40 years. But why this structure is so distinctly hexagonal, why only Saturn has such a hexagon and what physical laws are behind it has so far remained unclear. There have already been some considerations. “But there was no model for how such large-scale polygonal flows could arise in the highly turbulent atmosphere of Saturn,” explains Radesh Yadav and Jeremy Boxham from Harvard University.

How deep does the hexagon go?

Most planetary researchers assume that this hexagonal pattern is based on a variant of the Rossby waves – a large-scale wave in gas or liquid that is created by the interaction of planetary rotation with the so-called Coriolis force. This occurs because the planet rotates faster at the equator than at the poles. In the earth’s atmosphere, for example, this ensures that air masses and winds are deflected towards the poles. On Saturn, it is commonly assumed that local turbulence in the wind band near the pole combined with this Coriolis effect could create the corners in the polar flow pattern. However, the depth of this hexagon and where its roots lie has so far been controversial: “There are two basic theories: in one the hexagon is flat and only extends ten to hundreds of kilometers in depth, in the other it extends for thousands of kilometers down, ”say Yadav and Boxham.

In order to trace the roots of the hexgon, they have developed and run through a model simulation that also includes the processes in deep layers. To do this, they constructed a virtual Saturn, the deeper, stable inner layers of which are surrounded by an atmospheric layer from around 90 percent of the Saturn radius. This outer layer consisted of shells of decreasing fluid density. The researchers then set this virtual gas planet in rotation and observed how the fluids behaved under the influence of the rotation and convection between the differences.

Shape-forming vertebrae only visible in depth

It was shown: “In the course of the simulation, strong zonal currents gradually develop from the rotating turbulent convection,” the researchers said. Similar to Saturn and also to observe Jupiter, wind bands arise that move alternately with and against the direction of rotation. “But the dynamics of this system include more than just the zonal currents,” report Yadav and Boxham. “At the same time as the currents, well-defined, large-scale eddies are created in the middle and high latitudes.” And like the real Saturn, a large eddy formed directly on the North Pole in the simulation. Immediately south of it was framed by three smaller, counter-rotating cyclones, which in turn were followed by a whole set of even smaller cyclones. These structures resulted in a pattern that resembled a polygon with nine corners. All of these structures appeared most clearly at around 95 percent of Saturn’s radius – corresponding to a great depth.

According to the researchers, this demonstrates that the Saturn hexagon must have deep roots – and that simple interactions between rotation, Coriolis force and fluid density can generate these polygonal patterns. The simulation also revealed that as the depth decreased, the turbulence and wind speeds in the gas envelope of virtual Saturn increased. Because the central vortex above the pole is strong and energetic enough to withstand these interferences, it remains up to the surface. The smaller cyclones, which contribute to the shaping in depth, are covered by the turbulence near the surface. “Similarly, we can imagine the scenario on Saturn, where the hexagonal shape of the jet is stabilized by six neighboring vortices,” explain Yadav and Boxham. “But they are hidden by the more chaotic convection of the layers near the surface.”

Making Mistakes: Here’s How You Learn To Cope With It

Photo: CC0 / Pixabay / Pexels "It is human to make mistakes" - as the saying goes. But it is often difficult to deal...
Read more

Photo: Laura Müller We have four easy yoga exercises for two for you. You can try them out with your partner, with your friend...
Read more

Researchers have discovered a hell ant in an amber that snatched a prey about 99 million years ago. (Image: NJIT, Chinese Academy of...
Read more

Select the best hardware and many large drives and you can click together a NAS worth a...
Read more

In this video you can see the new Ford Bronco do what it was made for: work! Comments Techzle wrote: August 5, 2020 Euromaster tire...
Read more

Rolling moon rocks on the trail

Example of an approximately 13 meter wide trace of a rock fall on the moon. The chunk broke away from a ledge (right)...
Read more
Astronomy

Exoplanet turns out to be a collision cloud

Artist's impression of the collision in the system of the star Fomalhaut. (Image: ESA, NASA and M. Kornmesser) It was considered to be one of...
Read more
Astronomy

This image of the Mars Reconnaissance Orbiter shows the former river delta in the Jezero crater. (Image: NASA / JPL-Caltech / ASU) Today it is...
Read more
Astronomy

Aiming at the heart of the Milky Way

Why Einstein is right: The astrophysicist Reinhard Genzel explains the Schwarzschild precession - an effect of general relativity that arises around the black hole...
Read more