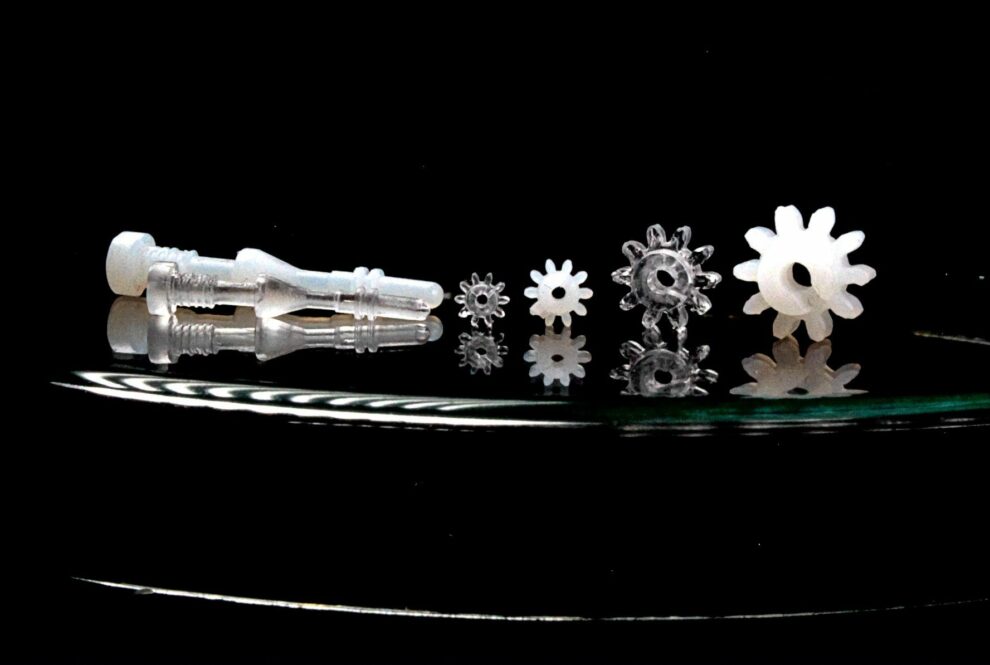 Glass is an ingenious material – compared to plastic, however, its processing is complex. But thanks to an innovative concept, shaped glass objects could now be produced as easily as plastic parts: German researchers have succeeded in transferring the injection molding process to the production of glass. By using a special composite granulate as a starting material, you can produce objects made of pure glass and in almost any shape. The process is simple, quick and environmentally friendly, say the developers.

Due to its practical properties, glass is known to be one of the most important useful materials for humans: In addition to everyday objects such as bottles and windows, many high-tech products in the fields of optics, telecommunications, chemistry and medicine are made of the shimmering material. The application potential would actually be even greater – but in many cases plastics are used as an alternative. Giving glass shape is comparatively difficult. To do this, it sometimes has to be heated up to 2000 degrees Celsius and then laboriously shaped by drawing or blowing.

In contrast to this energy-intensive and time-consuming process, plastics can be shaped relatively easily using the so-called injection molding process. The respective plastic is first liquefied at low temperatures in an injection molding machine and then injected into a mold. There, the material returns to its solid state by cooling and the finished part can then be removed. In this way, plastic objects can be produced industrially in almost any shape and size at high throughput.

So far, glasses have not been able to be formed by this process, which has limited their use. “For decades, glasses have often been the second choice when it comes to materials in manufacturing processes, because their shape is too complicated, energy-intensive and unsuitable for producing high-resolution structures,” explains Bastian Rapp from the University of Freiburg. “Plastics, on the other hand, allow all of this – but their physical, optical, chemical and thermal properties are inferior to glasses. But we have now succeeded in combining plastics and glass processing, ”says Rapp.

This was made possible by using a raw material developed by the researchers in the form of granules. It is a mixture of around 60 percent glass nanoparticles with special plastics. This so-called glassomer composite material can be used like the usual plastics when used in injection molding machines, the scientists report. The granulate is liquefied at only 130 degrees Celsius and injected into shape. In this way, blanks are first created, which can then be transformed into pure glass objects by heating.

Glasses are baked from blanks

“Our glasses are initially plastic objects – we initially do the entire shaping in this way because only low temperatures are required and normal injection molding machines can be used,” explains Rapp. The blanks are then bathed, heated and finally baked at 1300 degrees Celsius. The process removes all plastic components from the material and leaves a transparent glass object in the desired shape.

The entire process requires less energy than conventional glass manufacturing concepts, which means that considerable amounts of energy can be saved, say the researchers. According to them, the quality of the glass structures is also high: they have a high surface quality so that post-treatment steps, such as polishing, are not required. The developers say that this opens up many possible uses for the objects manufactured using Glassomer glass injection molding technology. They see great potential, especially in data technology, optics and solar technology, as well as in medical technology.

“In particular, the production of small high-tech glass components with complicated geometries is possible using this process. In addition to its transparency, quartz glass is also interesting because of its low expansion coefficient: sensors and optics work reliably at any temperature if the key components are made of glass, ”says co-author Frederik Kotz. “We have already shown that micro-optical glass coatings can increase the efficiency of solar cells. With the new technology, inexpensive high-tech coatings with high thermal stability can now be produced. There are a multitude of possibilities for this in industry, ”emphasizes the scientist in conclusion, in order to illustrate the potential of the new process.

What do the three points in the Mercedes...
Read more

With the Mazda MX-30 we have an odd duck in our endurance test. Not only is it the first electric car from a...
Read more

Chrome, Edge, Firefox, Safari: Which is the fastest web browser on Windows and macOS?

The publishers of the various web browsers on the market all claim their superiority over their competitors. But what is it really? ...
Read more

All rumors and details at a glance We can also expect a new iPad Pro in 2022, but what are the innovations. If we...
Read more

If you switch from an Android phone to an iPhone, it is difficult to take your old conversations in Whatsapp with you. That...
Read more

All rumors and details at a glance We can also expect a new iPad Pro in 2022, but what are the innovations. If we...
Read more
Computer & Phone

Those in possession of the AirPods Pro or AirPods Max can enjoy the music undisturbed thanks to active noise cancellation. Sounds from outside...
Read more
Computer & Phone

Prime Video is Amazon's video streaming service and is on the rise in the Netherlands. For $2.99 ​​a month, you can stream thousands...
Read more
Computer & Phone

On pcactive.nl you will find a new giveaway every week with which you can win a nice prize or even prizes. We recently...
Read more
Computer & Phone

Banks that support Apple Pay in the Netherlands and Belgium