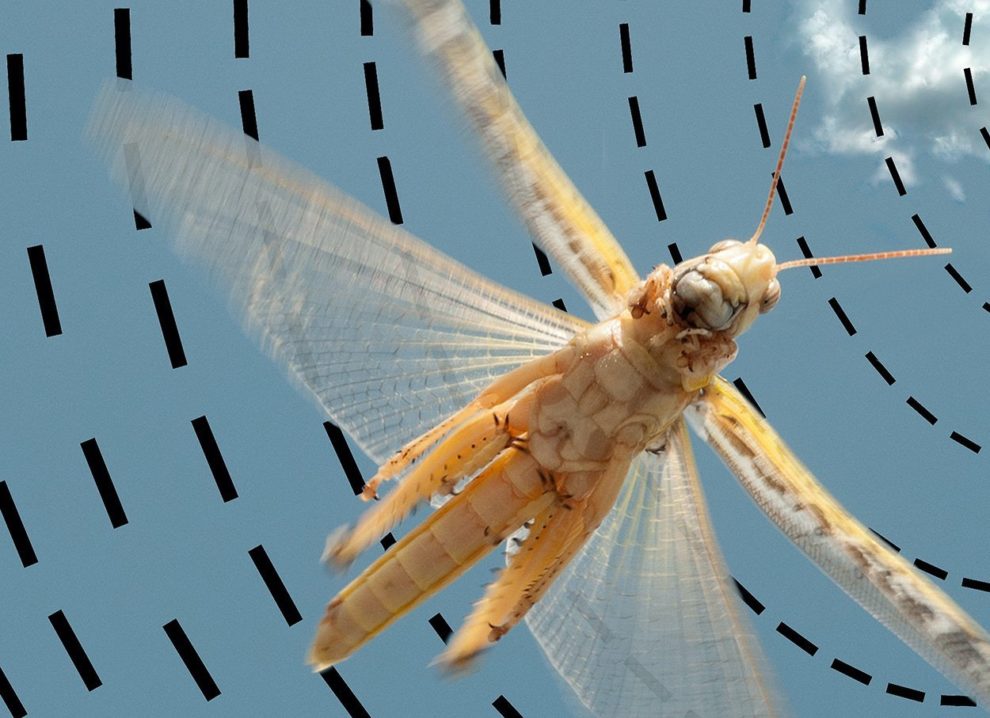 Desert locusts sometimes migrate several hundred kilometers. As researchers have now shown, they combine two different navigation systems: on the one hand, they orient themselves directly to the position of the sun, on the other hand, they process the polarization of light in the sky. This is done with the help of brain cells, each of which reacts to certain directions of oscillation of the light. This results in an inner compass that represents the sky in a 360 ° view.

If desert locusts become too cramped in their original habitat, they go on a migration. They move across the country in huge swarms and often cause considerable agricultural damage. But how do they orientate themselves on their hike? As early as 2007, researchers found that they couldn’t let themselves be carried away by the wind. Rather, they adjust their direction depending on the sun. They not only pay attention to the position of the sun, but also to the polarization – the direction of oscillation – of the light. It changes due to atmospheric scattering depending on the angle of incidence of the sun. Unlike humans, insects can perceive polarized light and thus orientate themselves when the sky is cloudy or they can only see a small section of the sky through the tall grass.

Sky map in the locust brain

So far, however, it was unclear whether and how grasshoppers combine the two navigation systems. Uwe Homberg from the University of Marburg and his team have now investigated. To do this, the researchers stimulated African grasshoppers of the species Schistocerca gregaria with polarized blue light and examined the insects’ brain activity while the light source was moving. “We measured the electrical activity with which nerve cells react to the direction in which the light oscillates,” explains Homberg’s colleague and first author Frederick Zittrell. “We took these measurements at up to 33 points in a virtual sky.”

It was found that certain orientations of polarized light trigger maximum activity of the neurons; “This orientation varies, depending on the origin of the light in the sky,” adds Homberg. “The orientations across the whole sky correspond to polarization patterns as they occur at certain positions of the sun. These are coded in a kind of compass in the central complex of the locust’s brain. ”According to this, certain neurons only react to certain directions of light oscillation. They are arranged in the so-called protocerebral bridge of the locusts like in a compass rose. This compass in the locust’s brain is a neural representation of the sky, “an expected polarization pattern, so to speak, that the animals can compare with the actual pattern,” explains co-author Keram Pfeiffer from the University of Würzburg. As the scientists found out, the cells represent a very large section of the sky – the central complex is like a compass that covers a full 360 degrees.

Under natural conditions, the polarization pattern of light in the sky depends directly on the position of the sun. However, previous studies have shown that the nerve cells in the insect brain respond differently to direct sunlight and polarized light. The signals appeared partly contradictory. Homberg’s group has now been able to show that the signals complement each other and are processed into an overall picture in the locusts’ brain. “The insect brain is thus able to clearly deduce its position from the polarization pattern of the sky without looking at the sun,” says Pfeiffer. According to Homberg, the central complex of the locust brain functions as a control center for navigation: “It combines all the available clues from the sky to merge them into a compass signal.”

Mitsubishi has released the first images of the thoroughly redesigned Eclipse Cross. The SUV presented in 2017 will get a new nose, a...
Read more

Where is that Golf 8 R? Volkswagen answers

Volkswagen has announced when they will pull the curtain on the all-new Golf 8 R. We've had the GTI and this week suddenly there was...
Read more

You already wanted to test drive the Polestar 2: now you can!

You already wanted to test drive the Polestar 2: now you can!
Read more

Video – The top 5 Porsche GT models (according to Porsche)

They from WC duck choose their top 5 themselves, but in this case they actually have a point, right? .
Read more

This is the most expensive occasion on Marktplaats

If spending a lot of money is your hobby, then you're in the right place: this is the most expensive used occasion currently on...
Read more

Bloodsuckers: on the trail of taste

Only after a female mosquito has sensed the taste of blood does she suck herself full. (Image: Alex Wild, used by permission) Delicious...
Read more
Biology

This time it is time to take part in the election for Bird of the Year. (Image: NABU) So far, a committee has chosen...
Read more
Biology

On the trail of intersexuality in moles

Researchers have sequenced the genome of the Iberian mole and uncovered the basis of the masculinization of females. (Photo: David Carmona, University of...
Read more
Biology

Gray squirrels are an invasive species. (Image: Tim Blackburn) Due to global trade, plant and animal species are getting more and more easily into...
Read more
Biology

How does the variety of shapes in cells come about?

Early experiences of hunger increase the willingness to take risks

Blacktip reef shark in the middle of a school of fish. (Image: Oliver Krüger) Hunger makes you reckless: if animals grow up under difficult...
Read more