Tesla has not only put the electric car on the map, but has also been a true pioneer in over-the-air software updates from the start. To see what this will have in practice, we list all the updates to the Tesla Model 3.

With the more traditional cars you always had to go to the dealer for an update, but Tesla does not want to know about it. Just like telephone manufacturers, the brand prefers to ensure that its products download and install the new software fully automatically. Fortunately, that good example is now increasingly being followed by other manufacturers. Nevertheless, Tesla is still lord and master of the ‘OTA update’, partly because functions are regularly added. So it’s not just about updating the map or fixing a previously made error, but can actually mean that cars can suddenly do things they couldn’t do before.

To provide insight into what those updates have brought with them since the Model 3 was launched, Tesla sent us a handy overview. In the US, the Model 3 had been around much earlier, but the timeline for the Netherlands starts in the first quarter of 2019. Then sales started here, although of course no one could estimate that the car would be such a resounding success. .

It goes too far to cover all updates in this article. There are too many for that, but not all updates are equally interesting. That is why we only mention the remarkable things. 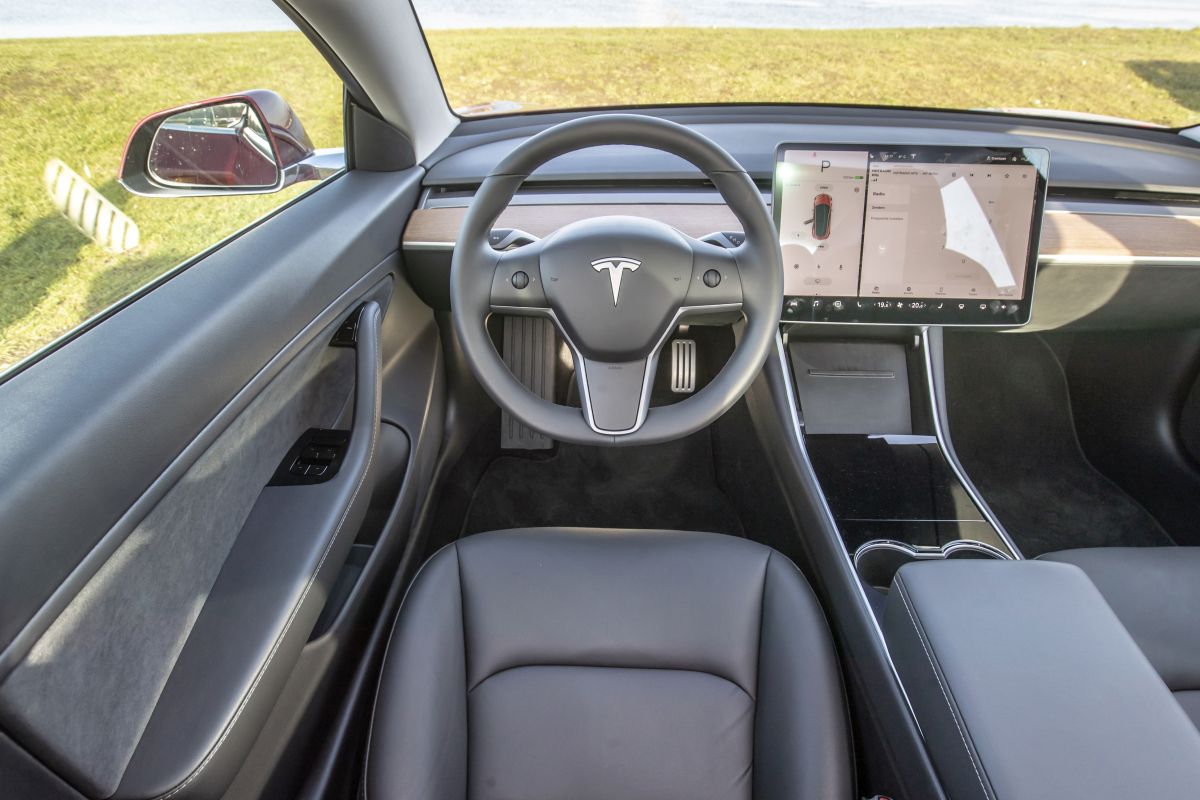 However, that immediately starts in the first quarter, when Sentry Mode was added, among other things. This function, which is called ‘surveillance mode’ in Dutch, means that the car can use its surrounding cameras as a security camera. If a Model 3 flashes its headlights when you walk by, it is kind enough to have a laugh: you insist! Dog Mode is also being launched now. This is a function that not only keeps the climate control working after the car has been exited, but also prevents passers-by from trying to free a dog that has been left in the car. On the central screen, the indoor temperature is displayed in an unmissable font, along with the text ‘Don’t worry, my owner will be back soon’. Another small thing: it is now possible to automatically fold the mirrors at a location of your choice. Handy in the car wash or in a tight garage.

In the second quarter, more games will be added, yes. Perhaps more useful is the function ‘automatic high beam’, or automatic high beam. Tesla does not have smart matrix LED headlights yet, but the high beam must in any case be switched off automatically when an oncoming vehicle looms. Bigger news comes in the form of the (fast) charging speed, which increases for the Long Range from 150 to 200 kW. Anyone who finds a Tesla V3 charger themselves can even charge up to 250 kW from June 2019. To ensure that the cars actually reach this speed, the battery is now automatically heated when navigating to a Supercharger. The famous Beach Buggy Racing 2, a racing game with which the user races with his or her specific Tesla over a Mario Kart-like track, also dates from this period.

More pastime will appear in Q3 in the form of Netflix and YouTube apps, which, of course, like the game, can only be used when stationary. A Karaoke function – or ‘car-aoke’, yes – conjures up the lyrics of a wide variety of music life-size on your screen, so that your passengers can sing along the way. ‘Camp Mode’ ensures that the car stays awake and the climate control continues to work for a longer period of time when the car is in ‘P’, so that you can sleep in the car if necessary. That is less nonsensical than it seems, because YouTube proves that there are actually people who try that. Finally, there is a novelty for the ‘small, but useful’ category: the dashcam now automatically saves images when the horn is used.

In the last quarter of 2019, the various Model 3 versions will just get 5 percent more power. Just think about that with an Audi or BMW. During this period, a better integration of your digital agenda with the Model 3 will also follow, so that the car can automatically navigate to work or another appointment if necessary. 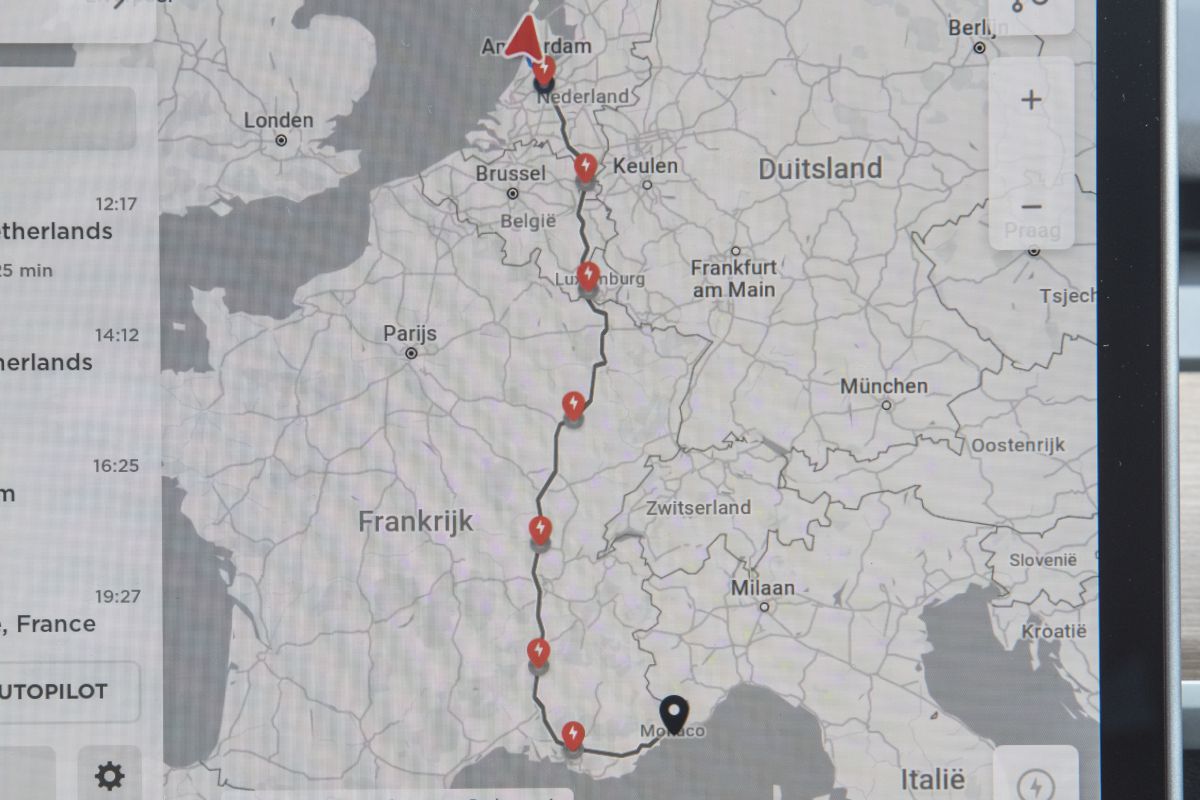 The biggest news in the first quarter of 2020 is without a doubt the addition of fast chargers from parties other than Tesla on the central navigation screen. This is not immediately the case worldwide, but it is in Belgium and the Netherlands, among others. On the car visualization on the left of the screen – on which you see yourself driving – from now on, traffic lights and stop signs are visible. That seems unimportant, but for those who have ticked the option ‘Full-Self Driving’ (FDS, or ‘fully self-driving steering’ in Dutch), this is the first step towards a car that actually stops for the aforementioned things.

The reversing camera on the back of the car will be joined by the cameras directly behind the front wheels in the second quarter of this year. Those ‘look’ to the rear, which should make it a lot easier to prevent the rim from hitting the curb. The interior-facing camera can now be activated. Whoever does this ensures that the car automatically sends a clip to Tesla in the event of an accident.

Where the maximum speed displayed until now was purely based on navigation maps, the Model 3 can now also ‘read’ signs itself and determine a maximum speed on that basis. The adaptive cruise control still switches on at that predicted maximum speed. If you want, you can now command the car to assume the current speed with a tap on the speedometer. From the fourth quarter this situation has improved again and it is possible to indicate in the menu that the car must always adopt the current speed for cruise control and Autopilot. Cars with FSD can automatically stop for stop signs and traffic lights from Q3.

The most recent update rounds for the Tesla Model 3 not only brought the cruise control update mentioned in the paragraph above, but also – yes – the possibility to secure your glove compartment with a pin code that can be opened via the screen anyway. The built-in Spotify app is being improved, so that a larger part of the user’s music can now actually be found. Podcasts are now also part of this.

In more than a year and a half, Tesla’s smallest model has become faster, the loading speed has increased, the driver aids have been considerably improved and the cars have all been given a series of fun gimmicks as a gift. It is not clear what will be added to this in the future. Tesla rarely if ever makes a concrete statement about what else can be expected in the field of updates. Hints, on the other hand, are clearly a different story for ‘Twitter king’ and CEO Elon Musk. In a recent tweet, Musk promises a pretty exciting ‘software release’, without going into further detail. So these are exciting times for Tesla drivers …

Just like architecture, the car has to move with the times. And nothing is more 'in 2020' than hybridisation. Even in the...
Read more

Max Emilian Verstappen is once again following in the footsteps of F1 greats. This time by buying his own private jet. Life has a...
Read more

Ban or not, the above Audi RS3 fell victim to fireworks. True gasoline heads have many affectionate names for cars like the Audi RS3. ...
Read more

Tesla has not only put the electric car on the map, but has also been a true pioneer in over-the-air software updates from the...
Read more

A dying piece of the market: the sporty three-door hatchback is in danger of extinction. But can you still track down a nice...
Read more

Just like architecture, the car has to move with the times. And nothing is more 'in 2020' than hybridisation. Even in the...
Read more
Cars

Max Emilian Verstappen is once again following in the footsteps of F1 greats. This time by buying his own private jet. Life has a...
Read more
Cars

Ban or not, the above Audi RS3 fell victim to fireworks. True gasoline heads have many affectionate names for cars like the Audi RS3. ...
Read more
Cars

A dying piece of the market: the sporty three-door hatchback is in danger of extinction. But can you still track down a nice...
Read more
Cars

A lawsuit between Hamilton and Hamilton is one of the things Lewis Hamilton has not won. And again. Who is the real...
Read more
Cars