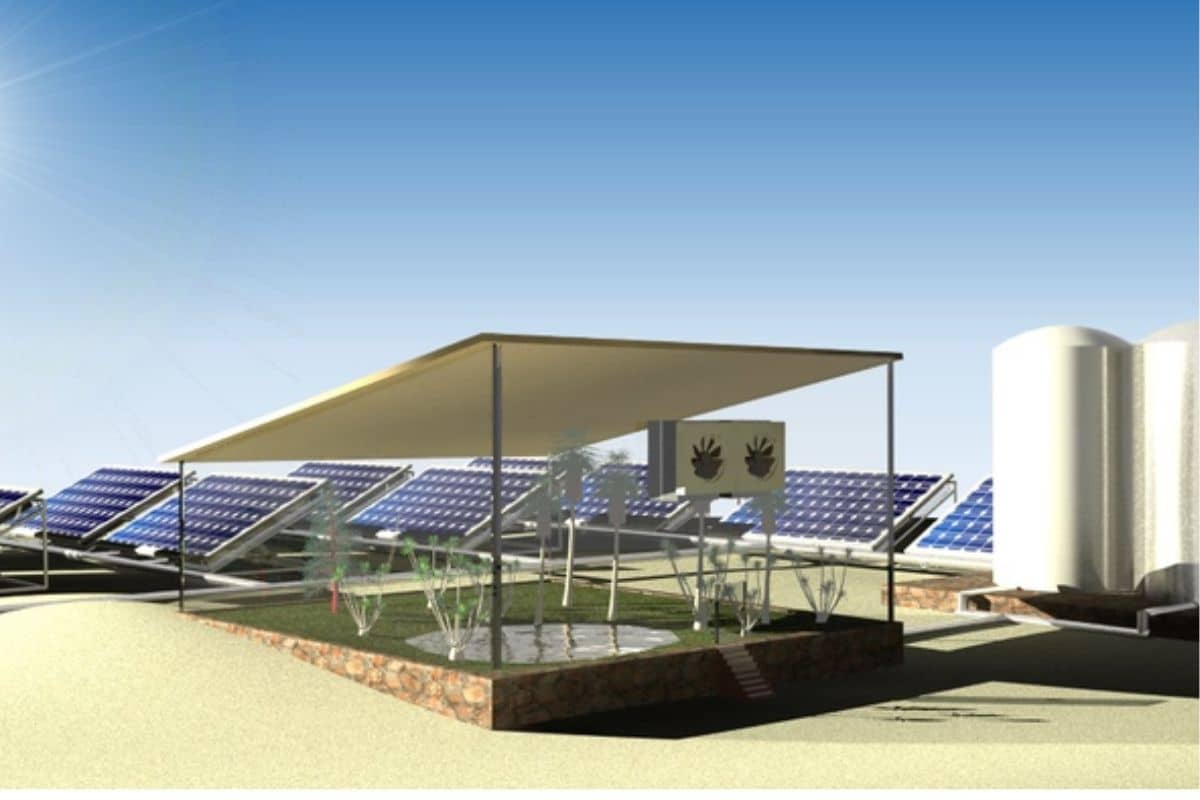 The clever invention is a sustainable and cheap way to provide people who live in arid desert areas with sufficient food and water.

Most of us have water running out of the tap at home. You can also just walk to the local supermarket to get food. And if you plug your smartphone into the socket, it charges. However, this is not self-evident for everyone on earth. “Part of the world’s population still does not have access to clean water, sufficient food and electricity,” said researcher Peng Wang in an interview with Scientias.nl† But now he and his team have come up with something more ingenious.

In remote desert areas, residents often lack electricity and enough irrigation to grow their own crops. But a newly developed system, called WEC2P, now makes this possible. “The system extracts water vapor from the air,” Wang explains. “It then uses the waste heat from the solar panels to produce fresh water. As a result, conventional water sources, such as river water, groundwater or seawater, have become redundant.”

That is how it works

To elaborate on that, the system works like this: WEC2P consists of a series of connected photovoltaic solar panels, with each panel placed on top of a layer of hydrogel. The hydrogel attracts water vapor from the surrounding air and then releases its water content when it heats up. The waste heat from the solar panels generated when generating electricity is used to drive the absorbed water out of the hydrogel.

This photo shows the photovoltaic solar panels, which use the water-absorbing hydrogel underneath to stay cool and increase efficiency. Image: Renyuan Li

A large metal container is then mounted under the solar panel and the hydrogel, which collects the water vapor and converts the gas into liquid water. The whole system is efficient too. The hydrogel increases the efficiency of the photovoltaic solar panels by about nine percent by absorbing heat, which cools the panels.

To see if the system is functioning properly, the researchers in Saudi Arabia decided to test WEC2P during the scorching month of June. Using the moisture extracted from the air thanks to the system, they attempted to water 60 spinach seeds planted in a plastic nursery tray. Over the course of the experiment, the solar panel — which is about the size of a desk — generated a total of 1,519 watt-hours of electricity. In addition, a total of approximately two liters of water was condensed from the hydrogel over the two week period.

The researchers couldn’t believe their luck. Because to their delight they saw that 57 of the 60 spinach seeds sprouted. They were even about 18 centimeters long.

“We were very excited about the healthy growth of the spinach for two reasons,” says Peng. “First, we conducted our experiments during the summer in Saudi Arabia, when it is very hot. Second, the spinach seeds sprouted and shot up. And that solely on the basis of the water that was produced from the vapor in the air. This was important as it demonstrated the feasibility of the concept of our design.”

According to the researcher, WEC2P has more than proven itself. “WEC2P produces solar electricity, generates water from the air and can grow crops,” Peng sums up. “And that completely on clean energy. It is therefore particularly suitable for supporting small communities living in remote areas with limited access to conventional water sources.” According to Peng, WEC2P is a sustainable and cheap way to provide people living in arid desert areas with sufficient food and water.

There’s work to be done

Despite the promising results, there is still plenty of work to be done. “WEC2P is still in its infancy,” said Peng. “The dimensions of the prototypes are approximately 0.6×0.3 m2. In addition, we want to further improve the performance of the system while at the same time scaling it up gradually and economically. Our team is currently working hard to further optimize the system.”

This means that it may still take some time before WEC2P actually appears on the market. “We look forward to working with potential industry partners to accelerate this process,” said Peng. But the ingenious invention is certainly promising. “We are proving for the first time the success of an integrated water-electricity-crop system,” he says. “The system is very energy efficient and is completely powered by solar energy. It therefore brings the Sustainable Development Goals drawn up by the United Nations, which state that everyone on earth should have access to clean water and affordable clean energy.”

†These solar panels pull in water vapor to grow crops in the desert– Cell Press (via EurekAlert)
Interview with Peng Wang
Image at the top of this article: Renyuan Li

Adult ants have placed larvae on pupae where they can ingest their milk-like secretions. © Daniel Kronauer ...
Read more
Earth & Climate