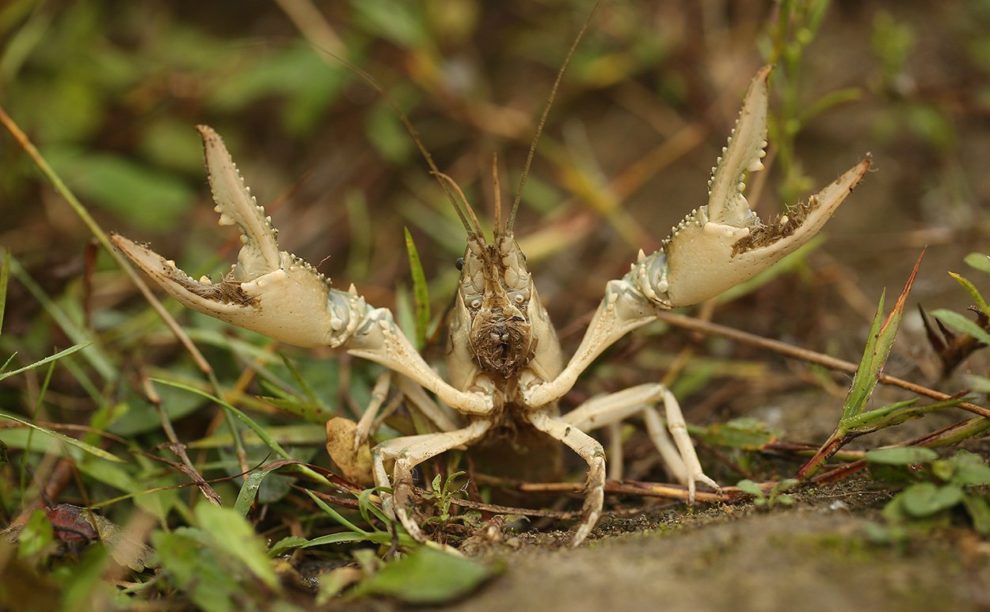 An example of hope: On the Upper Rhine, biologists have succeeded for the first time in pushing back an invasive animal species from a body of water. After the imported calico cancer became a threat to native crayfish, frogs as well as dragonflies and other insects, control has now been successful. Barriers and habitat changes keep invasive cancer at bay and have contributed to the recovery of the ecosystem.

Potassium crayfish (Faxonius immunis) originally comes from North America – like some river crayfish that have now been introduced to Europe. Probably due to exposure to aquariums, this cancer has spread to the Upper Rhine since 1934. Because a female can lay up to 495 eggs, these crabs reproduce rapidly and can then develop mass populations with 45 animals per square meter of water. The pressure on the stocks of their prey animals is correspondingly great: especially for endangered amphibians and dragonfly species, calico cancer is considered an acute threat.

The problem: these crabs are difficult to stop. Because to colonize new waters, the animals also go overland. In spring, egg-bearing females can reach isolated small waters and build up a new population there. As a result, old arms of the Rhine, quarry ponds and canals are also populated by the calico crabs in the Upper Rhine region. To combat this, biologists led by Andreas Stephan from the University of Education in Karlsruhe tested methods in a research project to remove invasive cancer from water and keep it away.

The first test area was the “Dreizack”, a body of water near Rheinstetten in Baden-Württemberg. “For me the situation seemed almost hopeless,” says Martin Reuter, environmental officer of the city of Rheinstetten. Because the cancer had already spread widely in the water. But for the first time, the biologists managed to completely free the water from calico cancer and successfully rehabilitate it – it is the first success of its kind against calico cancer. “There are clearly no more calico crabs in the trident now,” reports Stephan. “We have not caught calico crabs in the 25 catchstones we use to monitor the water for months. The species is definitely no longer there. “

This success was made possible, among other things, by a targeted redesign of the bank area: a tree trunk barrier around the water prevents crabs migrating overland from reaching the water. In addition, a broad layer of gravel on the bank ensures that the crabs do not build protective tubes. They can usually survive the drying out of water in these tubes, but without them their drought tolerance is severely restricted. “We are very pleased that a first success in the fight against invasive calico cancer can be recorded by a combination of measures on the trident in Rheinstetten and that domestic amphibians and dragonflies can use the water again as a habitat,” says Stephanie Rebsch from the Foundation for Nature Conservation Baden-Wuerttemberg.

And the success can be heard and seen: In the meantime, the Great Dragonfly shows its flying skills again and in the evening the loud concert of the tree frogs is heard. Because now there are no more calico crabs there that could cause tadpoles, spawning or larvae. “From the end of April to mid-June, we found around 260 larval skins of the great dragonfly on the trident,” says Stephan’s colleague Andreas Martens. With the “Dreizack”, the most important water for the tree frog in Rheinstetten could be rehabilitated. Overall, the researchers see their measures as a promising approach for other small waters affected by calico cancer.

This is the cheapest car with seat ventilation on Marktplaats

For only 1,550 Euro you can step into the cool seat of the cheapest car with seat ventilation on Marktplaats. It is summer and nice...
Read more

Who will put his car on P3 today, for the Grand Prix of the 70th Anniversary GP? F1 is celebrating this weekend, because it has...
Read more

Back school: what’s behind it and 3 exercises

Photo: CC0 / Pixabay / happyveganfit The back school helps you relieve back pain and prevent it. We'll explain how she does this and...
Read more

Why Hamilton may not be champion in 2021

There is still hope for Jean Todt and other people who hope Hamilton does not become the Rekordmeister. For years, the F1 has had a...
Read more

We are looking for a crossover for European road trips for a large budget. Mind you, it must be a new car! We often...
Read more

New Guinea has the greatest diversity of plants in the world

View of forest and mountains in New Guinea. (Image: Zacky Ezedin) Not to be outdone: New Guinea is the island with the greatest diversity...
Read more
Biology

Enjoying ice cream at the expense of tropical forests

Escape through the gut

The water beetle Regimbartia attenuate, the frog Pelophylax nigromaculatus and the exit of the beetle from the friend. (Image: Kobe University) Usually being eaten...
Read more
Biology

A female deep-sea angler fish has grown together on the belly with a tiny male. (Image: Edith A. Widder) Their reproductive system is as...
Read more
Biology

Springtails like this are important helpers in the decomposition of organic materials. (Photo: Henrik_L / iStock) Climate change and intensive agriculture not only affect...
Read more
Biology