Triumph Motorcycles confirms its plans to compete in the prestigious FIM Motocross World Championship in 2024, with a factory-supported racing program under the new Triumph Racing banner. 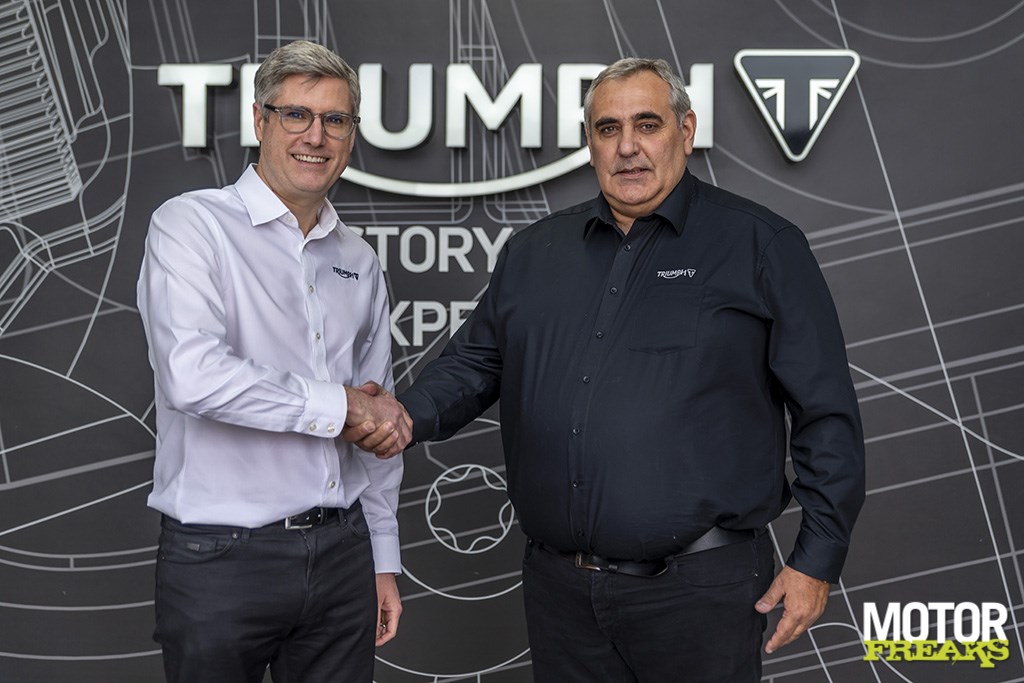 This groundbreaking new Triumph Racing Team has been created in partnership with Thierry Chizat-Suzzoni, one of the sport’s most experienced and successful team owners, who will be running two of Triumph’s brand new 250cc 4-stroke MX motorcycles in the 2024 MX2 class and will compete in the 450cc MXGP in 2025.

Under the new banner of Triumph Racing, which will now encompass all of Triumph’s racing activities, including Moto2 and Supersport, the partnership between Triumph and Thierry will be housed in its well-established and highly successful team structure and facilities.

Triumph emphasizes the ambition and drive for profit at the heart of this new partnership and is pleased to announce that its longtime team manager, Vincent Bereni, will continue to lead the team. This with a full team of highly experienced technical staff all focused on taking Triumph to the pinnacle of motocross.

The new long-term partnership between Triumph and Thierry reflects a shared purpose and commitment to bring depth and success to Triumph Racing’s competitive approach. As part of Triumph Racing’s portfolio of commitments, Thierry and Vincent’s team will focus on the FIM Motocross World Championship – in MX2 and MXGP – along with developing technology and talent to further build Triumph’s future clout in international motocross.

Thierry and Vincent’s racing heritage speaks for itself – with over 80 wins in MXGP and a huge reputation for technique and preparation. Backed by Triumph’s own motocross design division – responsible for the concept and development of the new range of Motocross and Enduro motorcycles – Triumph Racing aims to further expand its performance resources and capabilities with world-class knowledge and experience.

Triumph Racing is based at the Triumph Global Headquarters in Hinckley, UK, where the brand’s research, design, engineering and prototype building take place. The Motocross World Championship team will be based at Thierry’s race facility near Eindhoven in the Netherlands, where the race team’s staff, operations and race development will be housed.

The Triumph factory technical teams and the racing team work closely together to continuously improve chassis and engine performance through an intensive testing program in the US, UK and continental Europe. All this in the run-up to the first MX2 Grand Prix of the 2024 FIM Motocross World Championship.

Testing of the new Triumph motocross and enduro bikes is in full swing and information on each model’s specifications, performance features and components will be released at a later date, along with more news about Triumph Racing’s entry into other top championships and categories. 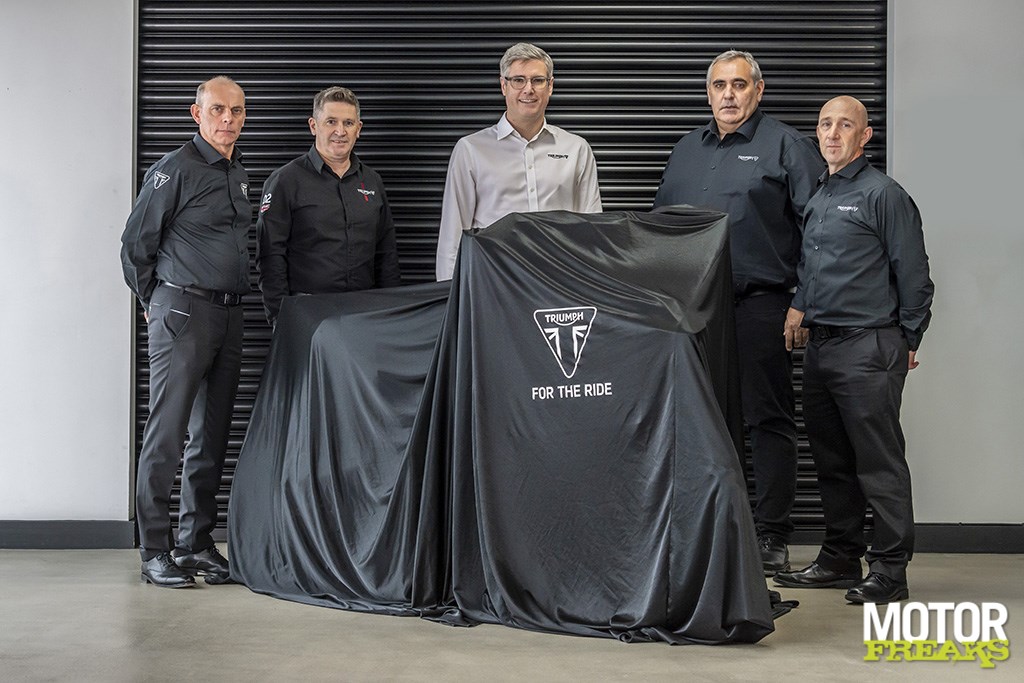 “Our new partnership with Thierry demonstrates Triumph’s long-term commitment to racing at the highest level. We share a passion for delivering top-class performance and the experience of Thierry and his team will be invaluable to our ambition to make our mark on a highly competitive championship. Our entry into the FIM Motocross World Championship with a factory-supported Triumph Racing team marks a milestone at the start of our new top-level off-road campaign.”

“Triumph has made a big commitment to build a dirt bike and race in the FIM World Motocross Championship. I am delighted to have my team become the official Triumph Racing Team in MX2 and MXGP. Nick Bloor and the Triumph Board of Directors have made their long term ambitions for the project very clear and i see a huge passion in everyone in the factory i am happy with the progress of the bike it looks great it shows speed on the track and vincent and my staff are working together with the engineers in Hinckley to make it a competitive package for entry into the MX2 Championship in 2024. MXGP continues to grow globally, I am very happy to be back and looking forward to racing with Triumph.”

” This is great news! Probably one of the most important news items of recent years. Infront Moto Racing will welcome a new manufacturer to the MX2 and MXGP world championship. We are talking about one of the most emblematic motorcycle brands in the world. Triumph will start from 2024 joining our championship with a full schedule in the MX2 and MXGP categories.This is a very important announcement and a fantastic sign regarding the interest and importance of MXGP in international motorsport.Over the past 20 years, MXGP has grown and has established itself worldwide. With an average of 19 events per year, it provides manufacturers with the best platform to develop and promote their motorcycles and parts worldwide. From Asia to South America and Europe, MXGP covers all different markets and reaches most off-road fans in the world, it is with great pride and excitement that we welcome Triumph to MXGP and we wish them good luck in the coming years and a great competition with the other factory teams already present!”

“The launch of Triumph Racing is a critical step in our journey to take Triumph to the pinnacle of racing across an even wider range of disciplines. Building on Triumph’s success as the sole engine supplier to the Moto2 World Championship and our participation in Supersport racing , the switch to MX2 and MXGP opens the door to a strategically important new chapter in the top class of off-road motorsport. We know well the demands of the world championship and that is the reason for the collaboration with Thierry. Together with Vincent, Their approach to racing and developing performance is impressive and we look forward to building the project together and adding to the success they have already achieved in the Motocross World Championship.”

“I’m really excited about today’s news. It’s taken a long time. Since starting this project with Triumph, I’ve been amazed at how hard everyone has worked. It shouldn’t go unmentioned that the entire R&D and engineering group that was part of it of the development of the motorcycles, has done an absolutely incredible job.From the early stages of the prototypes I was really impressed with how good the performance was, and since then, now that I’m in the UK to test the latest developments I can I tell you that these bikes have the capabilities to win at the highest level. I personally think that the riders, from professional to amateur, across the whole range of off-road models, will be really happy with what has been developed!”

– Thanks for information from Motorfreaks.

The Harley-Davidson European 120th Anniversary Festival will take place from June 22 to 25, 2023 and should form a European counterpart to the sensational...
Read more
Motorcycles

It's not really earth-shattering, but if you're in the market for a CRF300L and want something different from the standard HRC tricolor racing colors,...
Read more
Motorcycles

These are busy times at BMW. Yesterday we drove the new M 1000 R, today it was the turn of the thoroughly renewed...
Read more
Motorcycles

It may not be Yamaha's most talked about 500cc Grand Prix machine, but the YZR500 #10 that Kenny Roberts Jr. raced in the...
Read more
Motorcycles

Not the expected sun in Portugal for the first test of the 2023 KTM 890 adventure, but pouring rain, fog and about eight degrees....
Read more