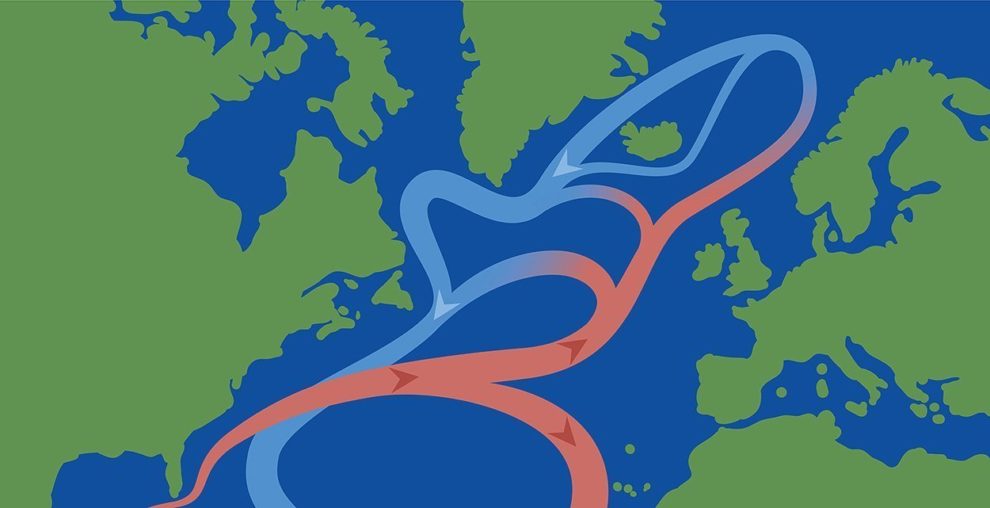 An important engine of global ocean circulation is located in the North Atlantic – the overturning current drives the Gulf Stream and shapes our weather. But as a study has now revealed, this Atlantic Meridional Overturning Current (AMOC) is currently as weak as it has never been in the past thousand years. This is confirmed by evaluations of data from ocean sediments, ice cores or the annual rings of trees, among other things. Accordingly, the Gulf Stream system experienced an unprecedented weakening, especially from the middle of the 20th century. According to the scientists, this is primarily due to climate change.

The Atlantic Meridional Circulating Current (AMOC) acts like a gigantic pump: In the Arctic North Atlantic, salty, warm surface water sinks from southern climes and flows back towards the equator as cold, denser deep water. This deep convection drives the large-scale ocean currents and thus makes a decisive contribution to the distribution of heat between the tropics and polar regions. “The Gulf Stream system works like a giant conveyor belt that transports warm surface water from the equator to the north and sends cold, low-salt deep water back to the south,” explains senior author Stefan Rahmstorf from the Potsdam Institute for Climate Impact Research PIK. “It moves almost 20 million cubic meters of water per second, about a hundred times that of the Amazon River.”

But for some time now there have been increasing signs that this North Atlantic overturning current reacts sensitively to climate changes. Even in the warm interglacial periods, this flow motor showed several misfires that brought the circulation to a standstill. And the Gulf Stream system is also weakening in modern times: Because more “sweet” meltwater flows into the northern Atlantic as a result of global warming, the salt content of the surface water is reduced. However, this reduces its density and makes it more difficult to sink. In addition, the dwindling sea ice hinders the North Atlantic deep convection. Measurements show that the circulation pump has already weakened by 15 percent since the 1950s. However, it remained unclear whether this fits into a long-term trend or whether it is just a longer-lasting natural fluctuation.

Rahmstorf, his colleague Levke Caesar and other scientists have now investigated this question in more detail using so-called proxy data. Natural “contemporary witnesses” who indirectly provide information about the examined parameters are referred to as such. “We used a combination of three different types of data to get information about ocean currents: the temperature changes in the Atlantic, the distribution of water masses and the grain sizes of the deep-sea sediments,” explains Caesar. “While individual proxy data are imperfect in the representation of the AMOC development, the combination of all three produced a robust picture of the overturning circulation.” The proxy data for the three parameters came from nine different sources, including annual rings of trees, ice cores, ocean sediments and isotope studies, however also the appearance of various fossil marine organisms.

Weakening more than ever in the past 1000 years

The evaluation suggests that the current weakening of the Gulf Stream system is more than a natural fluctuation that occurred earlier. In nine of the eleven data sets considered, the modern AMOC attenuation was statistically significant: “If we assume that the processes measured with the proxy data sets reflect changes in the flow, they provide a consistent picture – despite the fact that the data were recorded at different locations and represent different time scales. The weakening of the current has been unprecedented for more than 1,000 years, ”says co-author Niamh Cahill of Maynooth University in Kildare, Ireland. Specifically, the data show that the North Atlantic overturning current slowly weakened at the end of the Little Ice Age around 1850. In the middle of the 20th century, however, a phase of particularly rapid weakening began, which continues to this day.

According to the research team, this confirms that the weakening of the Gulf Stream system is closely linked to current climate change. “The new study provides further independent evidence for this conclusion and puts it in a longer-term paleoclimatic context,” says Rahmstorf. At the same time, the results also raise fears that the system will be further thrown out of balance by advancing climate change. “If we continue to push global warming in the future, the Gulf Stream system will weaken further – by 34 to 45 percent by 2100, according to the latest generation of climate models,” says Rahmstorf. “That could bring us dangerously close to the tipping point where the flow becomes unstable.” At this point the circulating flow could “tip over” to a new state of equilibrium, where it comes to a complete standstill.

Even if the flow motor in the North Atlantic continues to weaken, this could have consequences for the climate and societies on both sides of the Atlantic: For Europe, models predict that as the heat transport in the North Atlantic declines, large-scale air currents and also the tracks of storms will shift. That could lead to more storms over Europe, but also to summer heat waves and droughts. On the east coast of North America, in addition to climate effects, there could also be a rise in sea levels. Because so far the overturning current has diverted water masses away from the US east coast. “When the current slows down, this effect weakens and more water can accumulate on the US east coast. This can lead to increased sea level rise, ”explains Caesar. However, the possible consequences of a further weakening of the AMOC have only just begun to be clarified, and further research is required here.