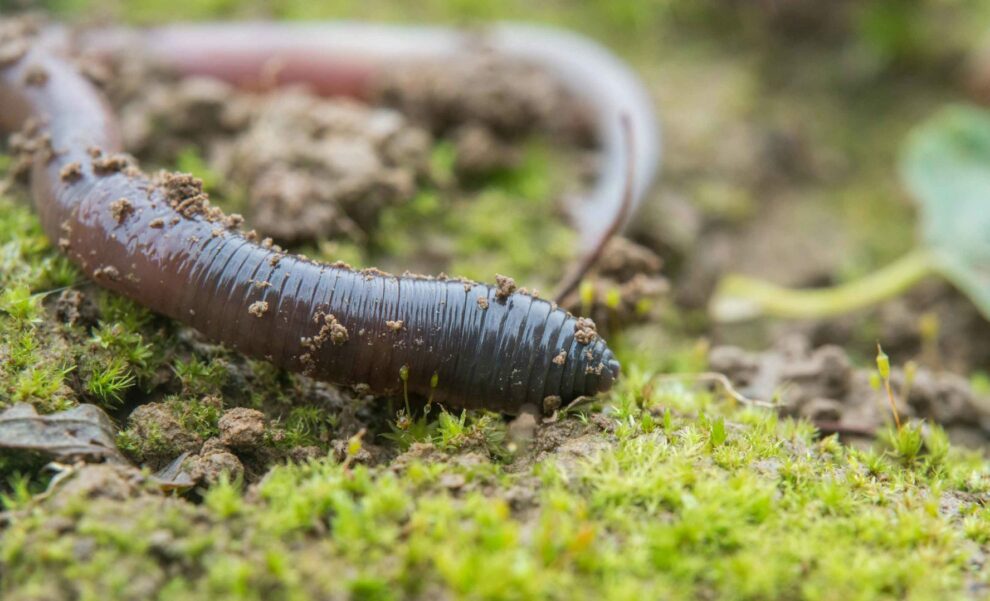 Useful for us – problematic elsewhere: Earthworms introduced from Europe cause astonishingly complex damage in North America, researchers report: the soil dwellers there impair the insect fauna living above ground in forests. Where the burrowing invaders establish themselves, the biomass and the number of species of the native insects decrease sharply. The study thus illustrates the complex ways in which alien species can affect ecosystems, say the scientists.

It is actually considered a prime example of a beneficial insect: the earthworm loosens up the subsoil through its burrowing activity and ensures that biomass, like leaves, is drawn into the soil in order to release nutrients. In Europe, it therefore plays an important role in the material cycle and soil fertility, because the ecosystems have long since adapted to its activity. But that is not the case in North America. During the last Ice Age the earthworms disappeared there and when the ice receded they did not reclaim the land there as they did in Europe. As a result, ecosystems have evolved that are adapted to soils without the little environmental engineers. However, earthworms are now finding their way into these: several species were introduced by European settlers and have been spreading continuously ever since.

Far-reaching effect of the rooting invaders

Previous research has shown that this is detrimental to the native forest ecosystems of North America, which are unadapted to the activities of the worms and their complex effects on soil characteristics. So far, however, the focus has primarily been on plants and soil organisms. In their current study, the researchers led by Malte Jochum from the German Center for Integrative Biodiversity Research (iDiv) Halle-Jena-Leipzig have now investigated the extent to which the presence of European aliens in the soil is also reflected in the insect fauna living above ground. The scientists used a piece of forest in Canada as the study area, in which there are still parts populated by earthworms and parts not affected. There they caught the above-ground insects using insect suckers and compared the catches from the two study areas.

Their evaluations showed that the frequency, biomass and number of species on the areas inhabited by earthworms differ significantly from those without earthworms. In the areas most affected by the burrowing invaders, the number of insect individuals was 61 percent lower, their biomass was 27 percent lower, and species number was 18 percent lower than in the controls. “We expected that earthworms would also have an impact on above-ground insects,” says Jochum. “But I was surprised at how strong these effects were.”

But which worm effect causes the damage? The researchers have not yet been able to say for sure – various aspects may play a role: “It would be possible that the worms eat away at the food and habitat of insects living above ground, which specialize in decomposing dead plant material,” says Jochum. Since many insects are herbivores, it can also be assumed that the observed decline is due to a change in vegetation, which in turn is related to soil changes. The scientists were not able to determine a significant change in the number of plant species or plant coverage in the current study area.

“However, this does not rule out the influence of the plants,” says Jochum. The researchers emphasize that the data on species composition and other properties of the plant communities have yet to be evaluated. The increase in predatory insect species and spiders that the team found in areas populated by the worms could also play a role. Apparently, these animals seem to benefit from the changes. In this case, too, the background remains unclear.

According to the researchers, however, the results show in any case that changes in species communities such as insects can have causes that have hitherto received little attention. “So far, only a few causes have been used to explain the global changes in insect communities, above all habitat changes above Earth,” says senior author Nico Eisenhauer from iDiv and the University of Leipzig. “The new results show that the loss of biodiversity can also have other causes that have so far received little attention and that should be taken into account in appropriate nature conservation measures,” says the scientist.