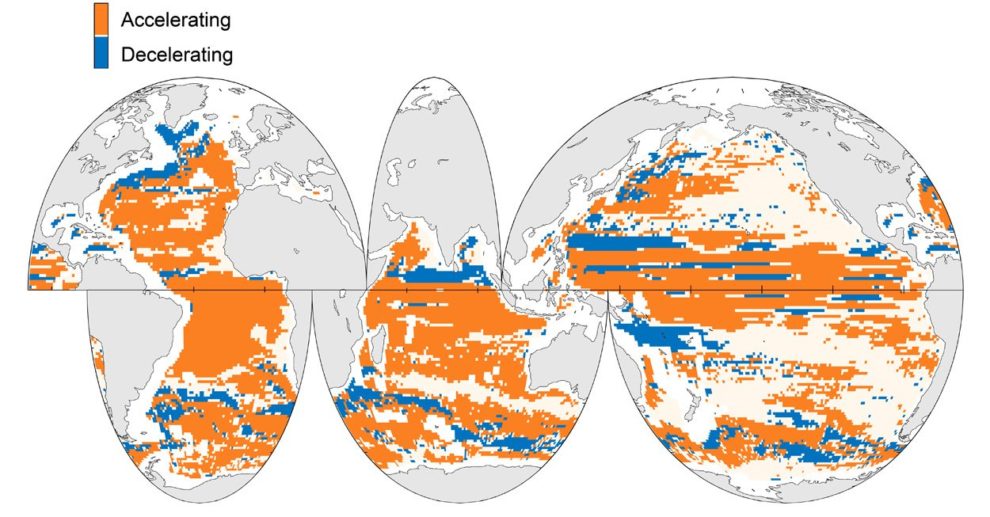 How does climate change affect global ocean currents? So far, scientists have assumed that warming tends to weaken many currents. But now a study shows that global ocean circulation has instead accelerated significantly in the past 30 years. Accordingly, the kinetic energy of the currents has increased on average by 15 percent per decade since 1990. This trend is particularly pronounced in all tropical sea basins, as the researchers report. A major cause of this acceleration appears to be the increase in wind speeds over the same period.

The great currents of the oceans are an important player in the Earth’s climate system. Because they store a large part of the heat provided by the sun and thus act as a climate buffer. Around 90 percent of the heat generated by the anthropogenic greenhouse effect has also been absorbed by the oceans in recent decades. At the same time, the oceans distribute the heat they absorb with the water masses from the tropical regions to the cooler waters of the higher latitudes, thus ensuring temperature compensation. It is therefore important to know how the ocean circulation changes under the influence of climate change. So far, however, there has been conflicting data. Accordingly, some currents such as the North Atlantic Circulation seem to be weakening, while others, including some Pacific flow patterns, have accelerated.

“However, due to the lack of systematic, direct observation data, it remained controversial whether there is a global trend in ocean circulation,” explain Shijian Hu from the Chinese Academy of Sciences and his colleagues. To clarify this question, they have now evaluated observation data from a global buoy measurement network that has been supplying data on ocean currents from the surface to a depth of around 2000 meters since 1959. In addition to this Global Marine Argo Atlas, the researchers used other series of measurements and twelve different numerical simulations to determine the kinetic energy of the oceans and the resulting behavior.

The evaluations showed: Before 1990 there were hardly any uniform trends in the ocean circulation, the changes from one decade to the next were different and insignificant. After this point in time, however, this changed: “All data records point to a common rising trend,” report Hu and his team. “In the period from 1990, the kinetic energy of the oceans increased by around 137 billion joules per decade – this corresponds to an increase of 15 percent compared to the climatological mean.” According to the researchers, the entire system of ocean currents, particularly in the accelerated significantly in the past 20 years.

Wind as the main drive

This trend towards faster currents is detectable in all large sea basins and down to a depth of 2000 meters, as the researchers report. The increase in kinetic energy has gradually continued from the surface to the depths. From the mid-1990s, this trend was then detectable into the deep sea. The acceleration of ocean currents is most evident in the tropics: there, the kinetic energy of the oceans increased significantly more than in the higher latitudes, as the evaluations showed. A closer examination also showed that the acceleration of ocean currents cannot be explained by long-term natural fluctuations alone. “This trend has been far stronger than natural variability in the past two decades and does not match the Pacific Decadal Oscillation,” said Hu and his team.

Instead, the researchers see the main driving force behind this trend in an increase in winds. Model analysis of six global weather data sets showed that the average wind speeds over the oceans have increased measurably in recent decades. On average, the winds accelerated by 1.9 percent per decade, as Hu and his colleagues found. “The spatial pattern of wind speeds over most ocean basins matches that of ocean behavior,” they report. The wind speed in the tropical regions has increased far more than in the higher latitudes. “These results suggest that the increased energy input from the wind has helped accelerate global ocean circulation,” said Hu and his team. They see global warming as the main cause of the increasing wind.