Oldest sperm discovered in the world 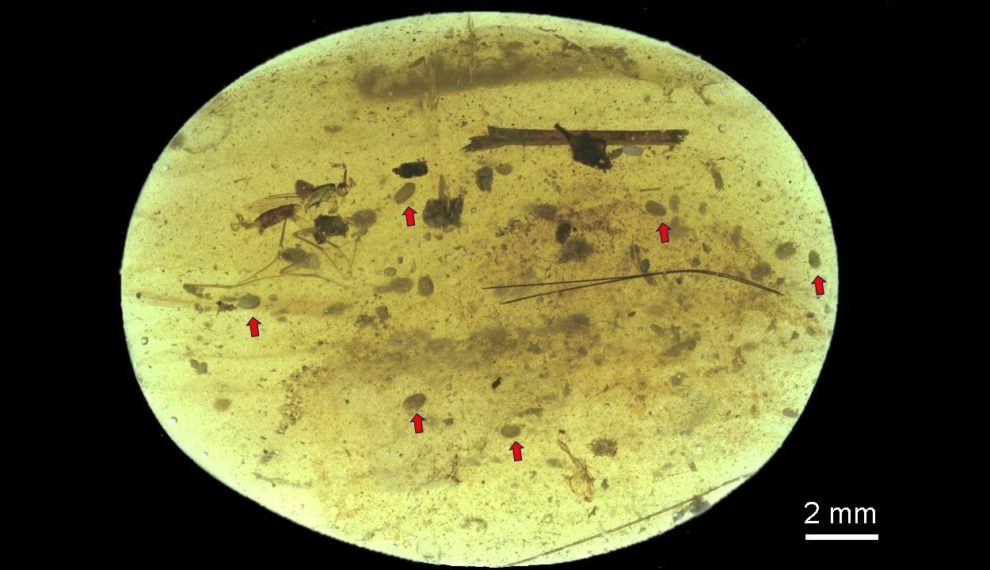 An international team of paleontologists has discovered exceptionally well-preserved tiny mussel crabs, so-called ostracods, in an amber from Myanmar. Some of the crustaceans turned out to be females, one of which had apparently mated in tree resin shortly before their death: The researchers found 100 million year old giant sperm in their bodies – the oldest sperm in the world to date. The find also provides information about the reproduction of ostracods in the Cretaceous period and today.

Shell crabs have lived in seas, lakes and rivers for around 500 million years. The tiny crustaceans have a two-lobed, calcified shell and thus look similar to mussels. Today tens of thousands of species are known. Some of them have an unusual reproductive strategy: unlike most other animals, they do not produce a large number of tiny sperm cells, but only a few, but particularly large sperm cells. As a team led by the paleontologist He Wang from the Chinese Academy of Sciences in Nanjing has now demonstrated, this strategy has existed for 100 million years.

The ostracodes that the researchers studied likely lived in the coastal waters of what is now Myanmar during the Cretaceous Period. Often only fossil shells of the crustaceans are preserved, but the researchers even discovered fossilized soft tissues, including internal organs and reproductive organs, enclosed in the amber. “It was an extremely rare opportunity to learn something about the evolution of these organs,” says geobiologist Renate Matzke-Karasz from the Ludwig Maximilians University in Munich, who was involved in evaluating the results. A total of 39 ostracodes were enclosed in the amber; The researchers assigned 31 of these to the new species Myanmarcypris hui. These included both male and female adults and young animals. With the help of three-dimensional X-ray microscopy, the researchers reconstructed the body structure of the mussel crabs, which are only around half a millimeter in size.

In this way, they were able to show the animals’ limbs and their reproductive organs in detail. Among other things, they found two penises in the males as well as muscular sperm pumps that transport the oversized sperm into the female during mating. However, the researchers discovered the sperm itself in a female animal. “This female must have mated shortly before being locked in the tree sap,” says study author He Wang. The researchers estimate the length of the sperm at least 0.2 millimeters – almost half as long as the body of an adult animal. Since the sperm were entangled in each other, the researchers suspect that they even underestimate the dimensions. Today’s ostracodes are known to produce sperm that are longer than their own body.

The production and ingestion of such huge sperm represents a significant investment for both males and females. But the effort is apparently worthwhile. “In order to show that the use of giant sperm in reproduction is not an extravagance of evolution, but can be a permanent benefit for the survival of a species, we need to know when they first appeared,” says Matzke-Karasz. The proof that animals have been successfully reproducing with giant sperm for 100 million years proves the success of this strategy, says the researcher. To this day, the corresponding reproductive organs in ostracods have hardly changed. “Sexual reproduction with giant sperm must therefore be advantageous from an evolutionary point of view,” said Matzke-Karasz.

Fossilized sperm from the animal kingdom are extremely rare; the oldest known mussel cancer sperm were 17 million years old, the record so far held by worm sperm of 50 million years. “The giant sperm in the individual we examined are thus by far the oldest sperm that have ever been identified,” the researchers write in their publication. “Our discovery underscores the importance of amber in documenting the soft tissues of invertebrates that are hard to find in other environments.”

The lawsuit against the fallen Volkswagen CEO Martin Winterkorn started on Thursday in the court of Braunschweig (Germany). The court will investigate the role of...
Read more

Although Hyundai is already doing well with its electric models, there are many more new EVs in the South Korean barrel in the near...
Read more

BMW is expanding German electric powertrain production capacity. The brand announced this today. From 2021, the plant in Leipzig will be involved...
Read more

Want to know everything about EVs? AutoWeek explains it to you!

Just over a week before the EV Experience will take place at Circuit Zandvoort. Techzle editor Cornelis Kit is on hand to explain...
Read more

Major financial blow to car companies due to decline in sales

The car industry has suffered severe blows in the second quarter of 2020, according to the most recent 'Branche Barometer' of the Bovag. ...
Read more

Insight into the fossil preparation

Embedded in oil shale, they have survived for millions of years: A taxidermist explains how finds from the famous Messel mine are preserved...
Read more
Earth & Climate

The gibbon fossil was discovered in this place near Ramnagar. (Image: Chris Gilbert) Gibbons are the sister group of the great apes and therefore...
Read more
Earth & Climate

In the rainforest and in other tree populations around the world, the following clearly applies: Trees that grow quickly die young. (Image: Atelopus...
Read more