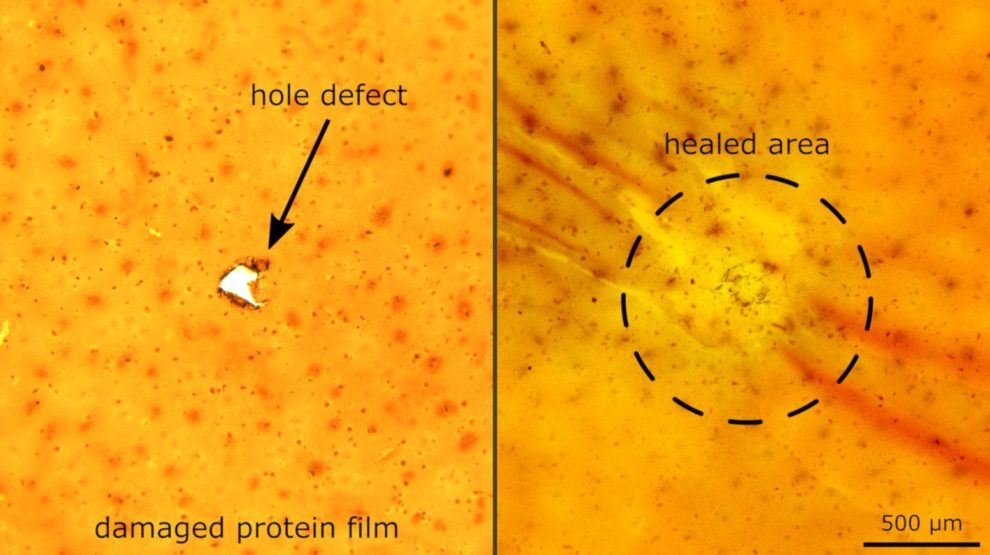 Elastic, biodegradable and surprisingly hard-wearing: Researchers have developed a material made of protein structures that can heal itself immediately after damage. The material, which was inspired by squids, could above all advance the development of soft elements in robotics, say the scientists.

Without our self-healing powers, we would quickly be “broken” because the various stresses constantly cause damage to the skin, muscles or other tissues in our body. Scientists have been trying to transfer this biological ability to self-repair to artificial substances for some time. Robotics in particular could benefit from soft materials with self-healing powers. Because if one day the “technologists” are to support people in complex environments, they must have flexible elements and be as little prone to repairs as possible. Some creations of so-called soft robotics are even made entirely of soft materials. But industrial robots, prosthetic legs, respirators and protective equipment also need elastic elements that can absorb kinetic energy.

But these soft parts are sensitive or develop tiny cracks and cracks with constant, repetitive movement and finally break. With a self-healing material, the initially small defects could be repaired continuously before failure. Substances have already been developed that can repair damage themselves, but they leave something to be desired: the molecules of previously deformable self-healing materials take several hours or even days to reconnect with one another. This often results in less strength at the point where the material was broken.

“Our goal was therefore to use synthetic biology to create a self-healing material whose physical properties we can control,” says Melik Demirel from Pennsylvania State University in University Park. He and his colleagues used a role model from nature: They first examined the characteristics and educational foundations of a self-healing tissue in squid. It forms the ring-shaped tooth structures in the suction cups with which the sea predators hold on to prey. If these stable protein structures are damaged, they can heal themselves by reconnecting.

The researchers finally succeeded in using synthetic biology methods not only to reproduce this material, but also to optimize it for technical applications and production. As a result, it could be produced in conventional bacterial bioreactors. As they explain, the biological polymer structures then combine to form a flexible, rubber-like material with properties that far surpass previous self-healing materials, and not only that: “We changed the molecular structure so that we even take the material’s self-healing powers to the extreme could, ”says Demirel. “We have reduced the naturally 24-hour healing phase to one second. Our technology puts nature in the shade, ”says the scientist.

As Demirel and his colleagues explain, the structure of the octopus takes longer to heal because the natural protein molecules are only gently interwoven. With the material developed in the laboratory, however, the scientists changed the nanostructure of the molecules so that they are all connected to one another. “A network in which only a few points are interconnected has weak points. But we have networked all the points and improved the material in this way, ”explains the first author of the Abdon Pena-Francesch study from the Max Planck Institute for Intelligent Systems in Stuttgart. The concept says that every physical connection in the material is reversible, the scientists say: connections that were separated at one point automatically click back into the correct position. “We have damaged the material in many different ways and every time it has repaired itself within seconds,” says Pena-Francesch.

Another positive aspect of the new material is that, unlike conventional plastics, it is 100 percent biodegradable or reusable. “We should minimize the use of petroleum-based polymers for many reasons,” Demirel says. Just as the structures of an octopus decay in the ocean, the biomimetic polymer is also biodegraded, the researcher emphasizes. By adding an acid such as vinegar, it can also be converted back into a raw material that can be used for a new synthesis.

Co-author Metin Sitti from the Max Planck Institute for Intelligent Systems is also convinced of the great potential of the new material: According to him, it now opens up a large, unexplored area of ​​possible applications in robotics. “Self-repairing, physically intelligent, soft materials will be essential for the construction of robust and fault-tolerant soft robots in the near future,” says Sitti.

This is how you disable and enable Live Photos

Follow the steps in this tip to enable...
Read more

It's a mouthful, but with the 911 GT3 RS MR you have built the most ideal track Porsche ever. In principle, every car is...
Read more

This is how TestFlight works: beta testing iOS apps on iPhone and iPad

With TestFlight you can beta test iOS apps....
Read more

There is some perspective again for F1 after 2021. Or maybe even after 2020. Mercedes has reportedly offered Hamilton a new contract for just...
Read more

How hair dulls the razor

When shaving, the blade gets dull at some point - but why? (Image: DrGrounds / iStock) It is a paradoxical phenomenon: although razor blades and...
Read more
Computer & Phone

Select the best hardware and many large drives and you can click together a NAS worth a...
Read more
Computer & Phone

New on Videoland: best series and films of August

Lovers of Dutch-language series and films will benefit greatly from Videoland. After a free trial period...
Read more
Computer & Phone

Can the cellular network measure rain?

Mobile radio masts like this can also provide data for meteorologists. (Image: (Cynthia Ruf, KIT) There is noise or the connection can even break...
Read more
Computer & Phone

8 useful Android settings you should know

Android phones come in all shapes and sizes. However, there are essentially many permanent agreements. ...
Read more