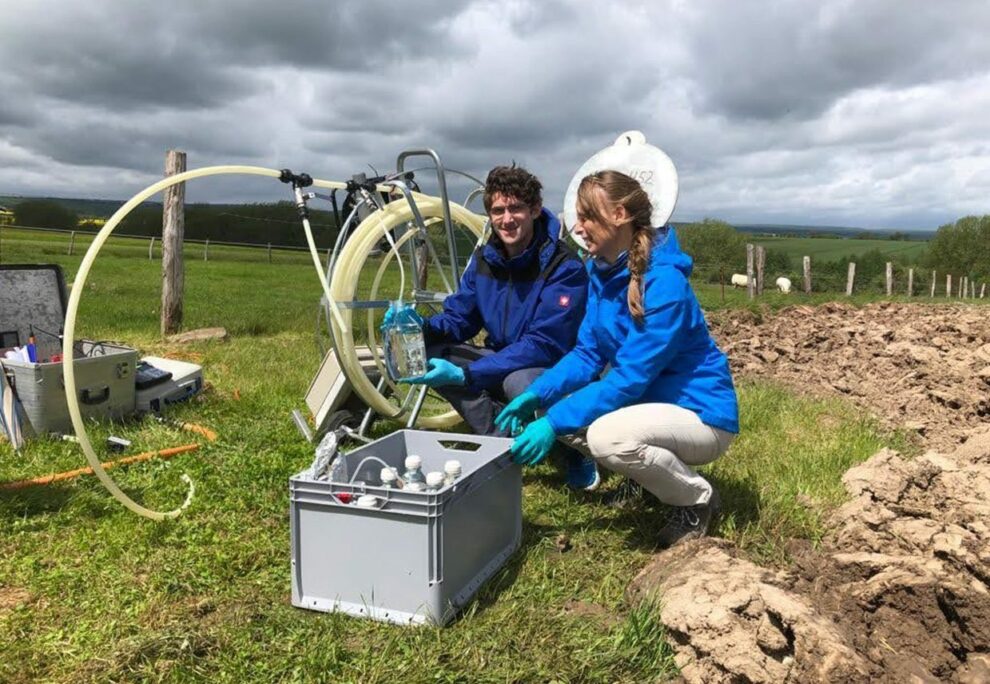 99 percent of the earth’s fresh water is underground – in the groundwater. Now a study reveals that the microbes in these underground water bodies are surprisingly productive: although they live in permanent darkness and have to get their energy from the chemical utilization of sulfur or organic residues, their primary production per cell is similar to that of plankton algae in the sea , as the researchers determined. Altogether, the organisms in the groundwater of carbonate rocks alone bind almost 110 million tons of carbon, if you include the aquifers made of granitic rocks, the figure is 260 million tons. This corresponds to 0.25 percent of estimated global net primary production.

The biosphere of our planet is highly productive. Above all, the microalgae in the upper water layers of the seas and the vegetation on the land surfaces produce large amounts of organic material through their photosynthesis and thus bind carbon. In contrast, the inhabitants of the subterranean habitats – organisms in groundwater, in caves or even in the rocks of the deep biosphere – have far less optimal conditions for their energy production and growth. They lack both the light for photosynthesis and often enough oxygen and nutrients. For a long time it was therefore thought that the organisms in these habitats only survive passively instead of actively multiplying and producing biomass.

How productive are the inhabitants of the groundwater?

However, scientists now know more about the inhabitants of the subterranean habitats. Genetic analyzes of microorganisms in groundwater have shown that many of the microorganisms found there are capable of primary production – they too can convert inorganic starting materials into organic substances. In the absence of light, they have to obtain the energy for this from the oxidation of inorganic compounds, such as reduced sulfur in the surrounding rock. The extent of the primary production in the shallow and deeper subterranean zones of the earth was only partially known up to now. Will Overholt from the University of Jena and his colleagues have therefore examined one form of groundwater ecosystem for its primary production: the aquifers in carbonate rocks. They contain around 2.26 million cubic kilometers of groundwater – this corresponds to around ten percent of the total amount of groundwater on earth.

For their study, the scientists took water samples from several deep wells in Thuringia, which came from a depth of five to 90 meters. They added a tiny amount of radioactively labeled carbon dioxide to some of these samples and then let the microbes in the water work for a defined period of time. The researchers were then able to use the highly sensitive accelerator mass spectrometry to determine whether and how much of the carbon contained in the CO2 had been incorporated into organic compounds. In parallel, they also investigated microbial nitrogen fixation and carried out genetic analyzes to determine the organisms contained in the groundwater samples.

The measurements showed that the microorganisms contained in the groundwater – mostly bacteria – absorb an average of around 0.3 to 10.8 trillionths of a gram of carbon per cell per day and store it in the form of organic compounds. This means that these inhabitants of the subterranean waters produce a similar amount of biomass as the bacteria in the uppermost, most productive water layer of the oceans. “The quantities we measured were therefore much higher than we had expected,” says Overholt. “They match carbon fixation rates measured in nutrient-poor marine surface waters and are up to six times higher than those observed in the lower zones of the sunlit open ocean, where there is just enough light for photosynthesis.” However, because fewer nutrients are available in groundwater than in the sea and the density of organisms is lower, primary production in the aquifers is significantly lower overall than in the ocean.

Overholt and his team determined that the aquifers in carbonate rock alone bind a total of around 110 million tons of carbon per year worldwide. Adding the carbon sequestration in the aquifers of crystalline silicate rocks, the net primary production of two-thirds of the world’s aquifers could be around 260 million tons of carbon per year. This would correspond to about 0.5 percent of the net primary production of marine systems and 0.25 percent of the total global net primary production, the scientists report. “That may not sound like much, but these measurements only represent a first estimate of the true global value,” says senior author Kirsten Küsel from the University of Jena. “With very little energy available in these nutrient-poor and perpetually dark habitats, even a small fraction of the world’s primary production is a surprise.”

The genetic analyzes of the groundwater samples showed that a large part of this primary production in the groundwater is carried out by chemolithoautotrophic organisms – microbes that obtain their energy from the chemical conversion of raw materials originating from the rock. In the oxygen-rich groundwater, the carbon sequestration happens mainly through the nitrification of ammonia, in oxygen-poor aquifers the microbes gain their energy mainly through the processing of sulfur and hydrogen. A group of microorganisms from the order of the Nitrospiria, which have not yet been precisely determined, apparently plays a particularly important role. Like the microalgae of the sea, they could form the basis of the food web in the groundwater ecosystem, the research team suspects. “Our results offer new insights into how these subsurface ecosystems work and provide clues as to how groundwater sources can be monitored or remediated,” says Küsel.