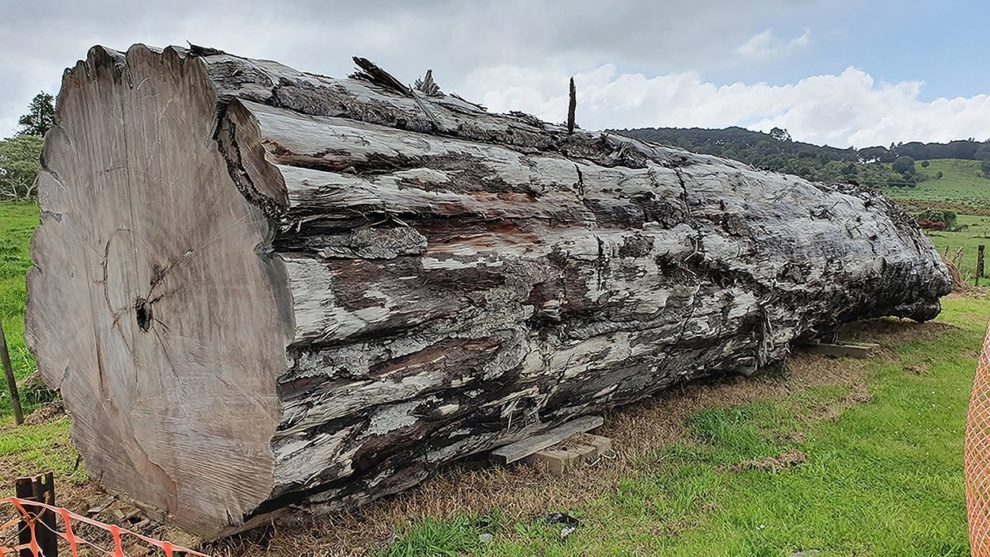 42,000 years ago, the Earth’s magnetic field temporarily reversed for a few centuries. With the help of a tree trunk from this period preserved in the swamp, researchers have now more precisely dated this so-called Laschamp event. At the same time they found that the earthly magnetic field was extremely weakened before the reversal. Its field strength could have dropped below six percent of normal. This had consequences not only for the atmosphere, but also for the climate and environment of our planet, as the scientists demonstrate using model simulations.

Alan Cooper of the South Australian Museum in Adelaide and his colleagues have now examined more closely when this weakening took place, how long it lasted and what consequences it had. A lucky coincidence came to their aid: In a wetland in the north of New Zealand, the swampy ground had preserved some kauri trees (Agathis australis) that had grown during the time of the polar reversal. One of these fossil trees was 1,700 years old and its tissues thus contained isotopic evidence from the entire time of the Laschamp event and the centuries that followed. For their study, the researchers analyzed the content of the isotope carbon-14 in the tree’s annual rings. This isotope is increasingly formed in the earth’s atmosphere when the magnetic field becomes weaker and cosmic radiation breaks nitrogen atoms into carbon.

Through these analyzes, the scientists were able to more precisely date the time and duration of the Laschamp event. “For the first time we can precisely determine the time and effects of the last reversal of the polarity of the earth’s magnetic field,” says co-author Chris Turney from the University of New South Wales in Sydney. According to this, this polarity reversal occurred 41,500 years ago. But even before that, from around 42,350 years ago, there was a strong increase in the C14 values ​​in the earth’s atmosphere. The researchers take this as an indication of a longer phase of the chaotic reorganization of the magnetic field, during which its intensity dropped to extremely low values. They christened this phase “Adams Transitional Geomagnetic Event” – after the author Douglas Adams. “During the Adams event, the field strength of the earth’s magnetic field dropped to only zero to six percent,” reports Turney. “In principle, at that time we no longer had a magnetic field – our protective screen against cosmic radiation was completely gone.”

The scientists used various past climate and environmental archives and model simulations to investigate the consequences of this. Because the new data from the Kauri tree also enabled a more precise synchronization of the geochemical witnesses of each epoch. “These kauri trees are like the Rosetta Stone, they help us bring together evidence of environmental change from caves, ice cores and peat bogs around the world,” explains Cooper. The evaluations showed that the weakening of the earth’s magnetic field around 42,000 years ago must have had considerable effects on the earth’s climate and environmental conditions. Among other things, the increased bombardment with cosmic rays led to a significant thinning of the protective ozone layer. “The unfiltered radiation from space tore apart the oxygen molecules in the earth’s atmosphere, separated electrons and caused light emissions – a process called ionization,” explains Turney. The resulting charged particles damaged the ozone layer and, in conjunction with the weakened magnetic field, caused auroras to appear over the entire globe.

At the same time, these processes in the atmosphere led to changes in the large-scale air currents and the climate, as the researchers determined using models. The influx of ultraviolet radiation increased, in the temperate latitudes of the southern hemisphere, including Australia, the climate became cooler and drier, and the glaciers advanced in the northern hemisphere. “The Adams event seems to represent a major climatic, ecological and archaeological upheaval that has so far remained largely unrecognized,” state Cooper and his colleagues. In her opinion, it could even be that these changes are also related to some of the upheavals in the animal world and human development that took place around this time: In Europe and Southeast Asia, people suddenly began to visit caves and paint their rock walls. In Australia the megafauna died out and in Europe the Neanderthals. “Overall, these results raise important questions about the evolutionary effects of geomagnetic polarity reversals and excursions over the course of the Earth’s history,” the scientists conclude.