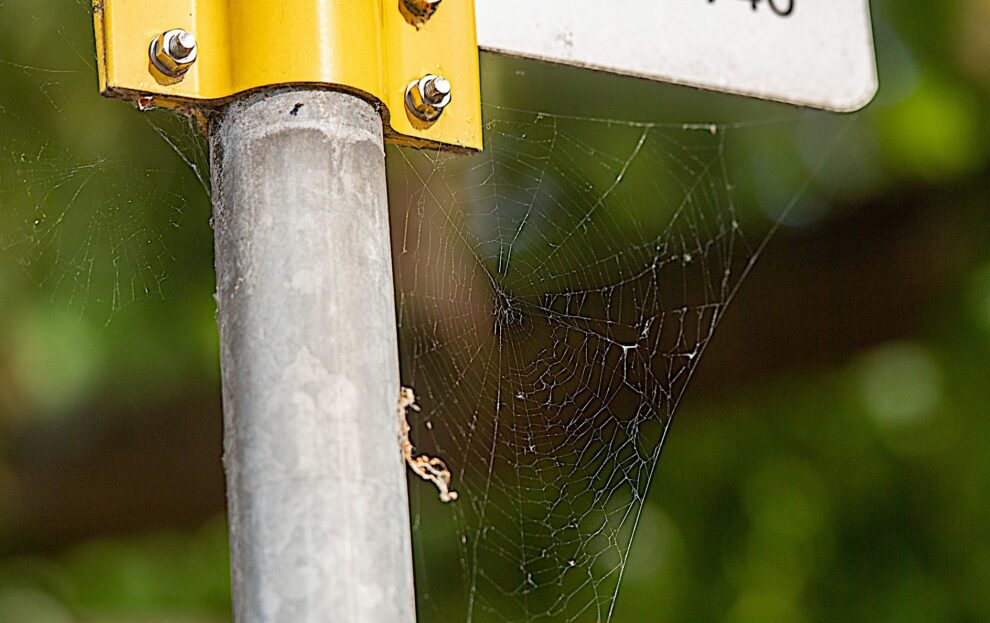 In addition to flies and the like, the notorious suspended matter in the air also gets caught in the sticky threads: Studies of spider webs allow conclusions to be drawn about the pollution of the city air with tiny plastic particles and tire abrasion, researchers report. The results show that the quantities found reflect the conditions at the respective location. According to the scientists, spider web analyzes therefore have interesting potential as a detection method: Particle pollution in the air could be recorded in a simple and inexpensive way and areas particularly affected could be identified.

The tiny plastic particles are not only found in bodies of water and soil – studies in recent years have shown that they can also be floating through the air in significant quantities. These traces of human civilization have even been found on remote ice surfaces in mountainous and polar regions. The so-called microplastics come from different sources. These are, for example, decay products from shopping bags and the like or fiber fragments from textiles. In addition, micro-rubber pollutes the environment, which mainly comes from the abrasion of tires on vehicles. Studies show that the stubborn substances can accumulate in organisms including humans. The consequences of this are currently the subject of research.

A fundamental question is where and how many of the different particles swirl through the air. To detect this, researchers typically install collector systems at each study site. However, such collectors may already be provided there by “eight-legged employees”, thought the scientists working with Barbara Scholz-Böttcher from the Carl von Ossietzky University of Oldenburg: They came up with the idea of ​​exploring the extent to which spider webs can be used to detect plastic particle contamination of the suitable for air. “Spiders are found all over the world – including in cities. Their sticky webs are ideal traps for anything that hovers in the air. So far, however, no one has examined spider webs for microplastics,” says Scholz-Böttcher.

For their study, the researchers collected spider webs from the upper area of ​​semi-covered bus stops. These sampling locations were located along roads with varying levels of traffic in the urban area of ​​Oldenburg. The samples were then processed in the laboratory, with the particles adhering to the nets being concentrated on filters. The team first examined these using microscopic analyses. Particles that had apparently settled on the sticky threads from the air were already visible. The researchers then heated the samples and separated the substances formed from the particles using a gas chromatograph. A downstream mass spectrometer then made it possible to allocate and identify the various sources.

Particle pollution is reflected in the nets

The results of the analysis showed: “All the spider webs were contaminated with microplastics,” reports co-author Isabel Goßmann from the University of Oldenburg. In some cases, the plastic content even made up a good tenth of the total weight of a net, the scientists report. Specifically, they were able to identify the plastic PET (polyethylene terephthalate), which presumably comes from textiles. It also turned out that apparently tiny particles of PVC (polyvinyl chloride) were buzzing through the air at the bus stops. This is a common material used in many plastic parts.

Air pollution caused by abrasion from car tires was also clearly evident. As the scientists point out, the results show that the suspended particles accumulate in the spider webs very quickly. The volume of traffic at the sampling points was reflected in the quantities determined. “Our results also indicate that abrasion from road markings is another important source of microplastic pollution along roads,” says Scholz-Böttcher.

According to the researchers, their study results show the potential of the spider web method for environmental monitoring: The method offers a simple and inexpensive alternative to complex measurements to comparatively assess the microplastic content of the immediate ambient air. According to the scientists, this could be of importance in the context of further toxicological investigations.

Nut-cracking chimpanzees looked at the tools

The nifty spider is only about half the size of its ant prey. The sequence of their hunting strategy can be seen in...
Read more
Biology

Ribosome makes ribosome outside the cell

‘Picture books give a distorted picture of biodiversity’

How many ants are there on our planet?